Jarrod Saltalamacchia belted a walkoff, two-run home run off Joakim Soria in the bottom of the ninth to send the Tigers to a 4-2 win over the Royals Sunday.

Detroit Tigers' Jarrod Saltalamacchia is doused during a postgame interview after his two-run walk off home run during the ninth inning of a baseball game against the Kansas City Royals, Sunday, July 17, 2016, in Detroit. Detroit defeated Kansas City 4-2. Carlos Osorio, AP
Fullscreen

Detroit Tigers' Cameron Maybin's cleats are seen as he prepares to bat during the third inning. Carlos Osorio, AP
Fullscreen 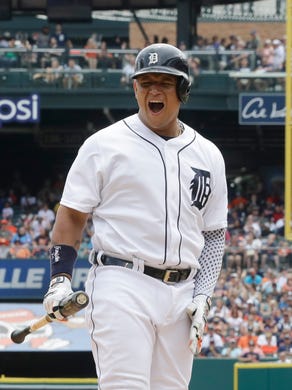 Detroit Tigers' Miguel Cabrera yells after being called out on strikes with the bases full during the third inning. Carlos Osorio, AP
Fullscreen

Detroit Tigers' Miguel Cabrera reacts after being called out on strikes with the bases full during the third inning. Carlos Osorio, AP
Fullscreen

Detroit Tigers' Jose Iglesias, right, is congratulated in the dugout after scoring from third on a balk during the third inning. Carlos Osorio, AP
Fullscreen

Umpire D.J. Reyburn is helped by Detroit Tigers catcher Jarrod Saltalamacchia after being hit on the neck during the eighth inning. Carlos Osorio, AP
Fullscreen

Umpire D.J. Reyburn is checked by Detroit Tigers trainer Kevin Rand after being hit on the neck during the eighth inning. Carlos Osorio, AP
Fullscreen

Detroit Tigers' Miguel Cabrera runs back to the dugout after flying out during the eighth inning. Carlos Osorio, AP
Fullscreen 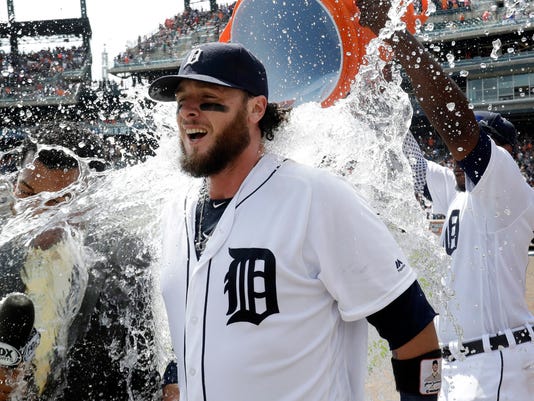 Detroit — It’s funny what can go through a player’s mind in big moments.

The first thing Jarrod Saltalamacchia thought when he came to bat in the bottom of the ninth with the scored tied 2-2 and Tyler Collins on first was they were going to ask him to bunt.

His second thought was, OK, maybe they want me to hit and run.

None of that. After walking and striking out twice Sunday, Saltalamacchia got to swing away at a 1-0 fastball from former Tiger Joakim Soria and he whacked it deep into the stands in right field, a walk-off home run that gave the Tigers a 4-2 victory and the series win over the Kansas City Royals.

“I knew I got all of it, because I didn’t even feel it off the bat,” said Saltalamacchia, who had homered just twice since April 24. “Wind was kind of blowing in from right, so I knew you had to hit it good. When I hit that ball, I knew it was going out.

"It just feels great to be able to do something.”

“I wasn’t going to ask him to do something he hasn’t done much,” Ausmus said. “He just kind of lulled them to sleep with the strikeouts and then came out with the thunder.”

Saltalamacchia was jokingly asked if he remembered touching the bases, or did he just float over them?

“No, I touched them,” he said. “Until I got to the plate, and then I guess I threw the helmet a little high and hit Miggy (Cabrera) in the head.

“I feel kind of bad. I might get released tomorrow.”

Doubtful. This was a big win for the Tigers, as their spontaneous on-field celebration showed. It’s two weeks before the trade deadline and they are trying to stay in the playoff race to stave off any thought the club might have of selling off players like it did last season.

“It’s an important couple of weeks, no question,” Ausmus said. “That was a lot of fun there, but let’s not forget why we were there in the first place — Michael Fulmer and the way he pitched.”

The rookie Fulmer continues to be a marvel. His streak of nine straight starts allowing one earned run or fewer came to an end, but he gave the Tigers eight strong innings, allowing two runs and six hits.

“What he has is poise,” Ausmus said. “The situation doesn’t rattle him, which often for a young pitcher is a hurdle. That just may be built into his DNA. But he doesn’t change. His body language doesn’t change. It doesn’t seem like his heart rate changes much, whether the bases are loaded or there’s nobody on.”

Fulmer said he might feel a little more inside than he shows, but he calmly navigated some rough water early in the game. He gave up a run in the second on a two-out, two-strike double by Cheslor Cuthbert — the only extra base hit he allowed.

In the third he gave up an RBI single to Eric Hosmer — ending his string of nine starts allowing one earned run or fewer, which dated to May 15.

His reaction to that?

“Don’t give up another run,” he said.

And he didn’t. The Royals, up 2-0, had runners on first and third with one out in the third inning. Fulmer got nasty. He struck out Salvador Perez and Alex Gordon.

As he always does, he credited Saltalamacchia for calling a good game. But Saltalamacchia said he had nothing to do with Fulmer’s poise in that third inning.

“He did it all on his own,” he said. “He slowed the game down a little bit and made his pitches.”

Fulmer went on to retire 17 of 19 hitters through the eighth, allowing just two singles.

Amazingly, he needed only 95 pitches to complete eight innings.

“I think it’s remarkable a young pitcher like that is able in most cases to keep his pitch count down,” Ausmus said. “Usually that’s a problem for a young power pitcher.”

The Tigers, meanwhile, weren’t doing much damage against Royals starter Yordano Ventura, though he was doing a fair bit to himself. They were 1-for-7 with runners in scoring position against Ventura, 2 for 10 in the game.

But they were able to tie the score on a balk and a wild pitch by Ventura.

“It was strange,” Ausmus said. “We got the runs, though we didn’t exactly rally. But I think we outhit them (11-6), so maybe it’s strange we didn’t score more than two runs. It is a funny game. You’ve seen teams get no-hit and win, so it isn’t always a fair game.”

In the third, singles by Jose Iglesias, Ian Kinsler and Cameron Maybin loaded the bases with one out. But Cabrera — 0 for 10 with the bases loaded this season — was called out on strikes. But with Victor Martinez batting, Ventura balked, allowing Iglesias to score.

“He didn’t come to a stop,” Ausmus said.

In the sixth inning, Nick Castellanos, who had three hits, blasted a two-out triple to the gap in right center. Ventura then bounced a pitch to the backstop and Castellanos coasted home with the tying run.

“Win the series, that was the ultimate goal against the Royals,” Fulmer said. “No matter how it gets done, as long as we took two of three from those guys, we’re happy. This was the rubber match today and it was a must-win. We’ve got the second half off to a good start.”