Kinsler, V-Mart still recovering after being hit by pitches

Second baseman is out with a mild concussion while DH has a swollen knee after being hit by pitches by Indians' Trevor Bauer.

Kinsler, V-Mart still recovering after being hit by pitches 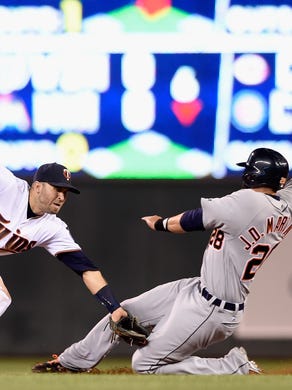 Detroit Tigers' Ian Kinsler is checked by a trainer after being hit in the head by Cleveland Indians starting pitcher Trevor Bauer during the third inning Sunday.(Photo: Phil Long, AP)

Minneapolis — The game was still hours away Tuesday and the Tigers had already taken a hit. Two hits, actually.

Neither second baseman Ian Kinsler nor designated hitter Victor Martinez, both struck by pitches from Indians' Trevor Bauer on Sunday, were able to play in the series opener against the Twins. Kinsler was placed in concussion protocol and Martinez was unable to move around much on a swollen right knee.

Kinsler, who was struck on top of the helmet with a 93 mph fastball, was examined by a physician in Cleveland Sunday night and was allowed to travel with the team to Minneapolis. It wasn’t until Tuesday morning that he was officially diagnosed with a “mild” concussion.

“He has concussion-like symptoms,” Tigers head athletic trainer Kevin Rand said. “The protocol is, he has to demonstrate he can handle activity without a recurrence of the symptoms. Once he does that, he’ll be good to go.”

Kinsler, according to Rand, didn’t have any symptoms during the off day Monday. But after he rode a stationary bike for a while Tuesday, he started to feel dizzy. The process will be repeated every day until Kinsler is asymptomatic.

“He has to go through a whole day’s activity and show he can do what his job requires,” Rand said. “He’ll ride a bike or run on the treadmill, take ground balls, take batting practice — all of that. If he can do that without the symptoms recurring, he will be able to play.”

Kinsler doesn’t have a history of concussions, so he has no idea what to expect, in terms of how long the symptoms will last.

“This is something that I want to get over quickly,” he said. “Just go through whatever the protocol is. Just have to wait to clear the steps there.”

Foggy-headedness and light-headedness — especially when he exerts himself physically — seems to be his biggest issue.

“No headaches,” he said. “I haven't experienced headaches. I mean, maybe you could call it a headache. But it's not a headache like you'd have, like a caffeine headache or something like that.

He said Bauer had not reached out to him, though he did see his apology after the game. Asked if he harbored any hard feelings, he said, with his wry smile, “I mean, I don't like the Indians, does that count?”

Andrew Romine got the start at second base Tuesday and went 1-for-4 in the Tigers' 8-1 win.

Martinez has battled soreness in his right knee for long stretches this season. He took a cortisone shot in that knee in June. He was hit on the right knee in the first game of the Indians’ series and then again by Bauer Sunday.

But Rand said there were no plans to drain the knee.

“It’s just swollen, purple and swollen,” manager Brad Ausmus said. “It’s going to be hard for him to move around for a couple of days.”

With 13 games left and the Tigers starting the day 2.5 games out of a wild card spot, the timing of the injuries is less than ideal — especially considering center fielder Cameron Maybin continues to play at diminished capacity with a sprained left thumb.

Miguel Cabrera, who was hit in the left hand by Bauer Sunday, still had soreness but was in the lineup Tuesday.