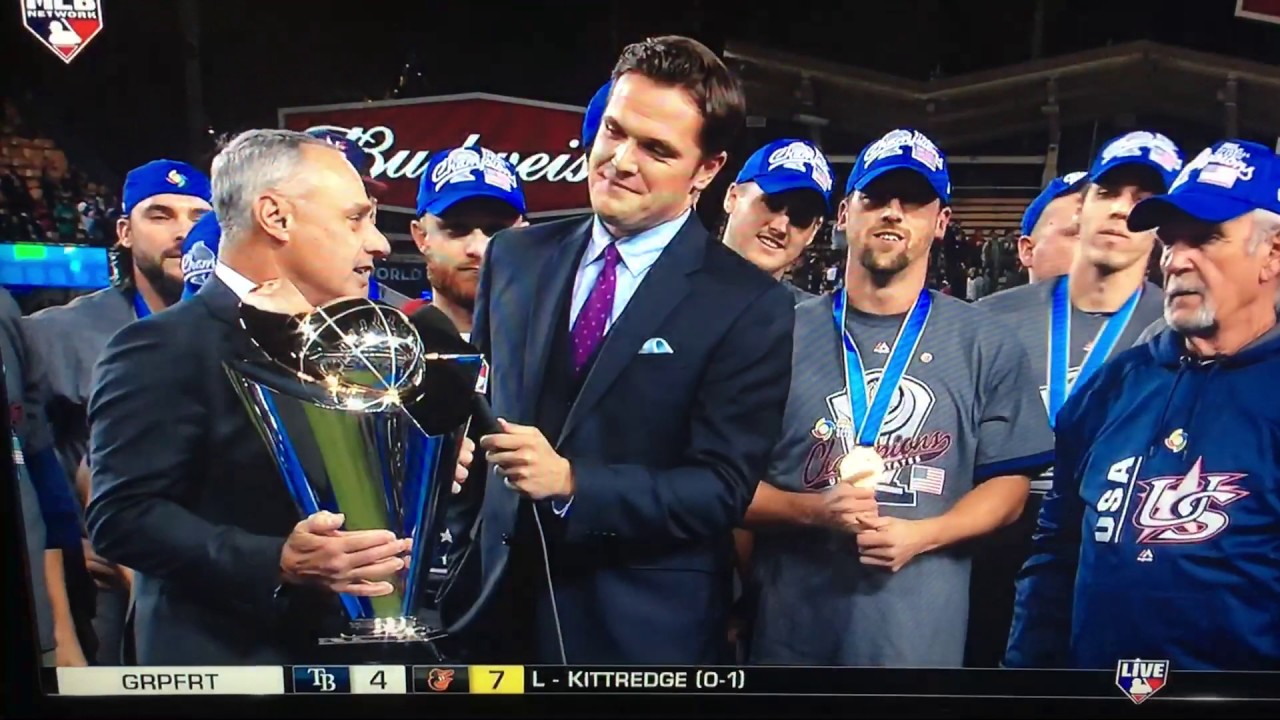 Los Angeles – The United States is on top of the baseball world, and Ian Kinsler and Jim Leyland provided two of the most memorable moments.

Kinsler, the Detroit Tigers’ second baseman, hit a two-run homer in the third inning Wednesday night, giving the Americans a 2-0 lead in an eventual 8-0 triumph over Puerto Rico in the championship game of the World Baseball Classic.

After the game, U.S. manager Leyland got emotional in dedicating the game to American military men and women.

After the win, the Americans planted their eagle statue mascot on the mound in celebration, a blue cap jauntily hanging from one of its large wings.

“It’s a different feeling when the USA is on your chest,” first baseman Eric Hosmer said. “We wanted to get the U.S. back on top of the baseball world, and we did that.”

For a sport known as America’s pastime, the U.S. had struggled since the WBC began in 2006. Twice, the Americans lost in the second round and they went out in the semifinals in 2009.

This time was different.

“These guys were here to do their best,” Team USA general manager Joe Torre said. “The thing I marveled at was how quickly they came together, and Jimmy (Leyland) deserves a lot of that credit. They’re just a great group who understood what this event is all about.”

After the final out, the Americans massed on the mound, hugging and high-fiving while fireworks exploded in center field. Some of them grabbed a U.S. flag and circled the warning track, waving it in celebration with fans in the stands.

“There was only one thing on our mind, was to win this thing and to do whatever we can to win,” left fielder Christian Yelich said. “That helped us come together.”

The U.S. pounded out 13 hits and finished with a 6-2 record while making the final for the first time in front of 51,565 at Dodger Stadium.

Puerto Rico lost for the first time in eight games after outscoring the opposition 55-26. The U.S. territory finished runner-up for the second time, having lost to the Dominican Republic in the 2013 final.

Tournament MVP Marcus Stroman avenged his shakiness in the Americans’ 6-5 loss to Puerto Rico during pool play. The right-hander from the Toronto Blue Jays gave up one hit in six-plus innings, struck out three and walked one on 73 pitches.

“I love pitching in these moments,” he said. “I love the atmosphere. I feel like the bigger the game, the more I’m able to get up, the more effective I am.”

Stroman allowed just three balls past the infield until Angel Pagan’s double in the left-field corner leading off the seventh, when he departed to a standing ovation, having staked the Americans to a 7-0 lead with the help of Ian Kinsler’s two-run homer.

In 2013, Stroman tweeted that he was going to play for Puerto Rico, where his mother was born. Instead, he wore the red, white and blue of the U.S.

“It was an unbelievable experience,” he said, “and I’ll be back in four years to defend the title.”

For the tournament, Stroman allowed 12 hits and four runs in 15.1 innings, with a 2.35 ERA, nine strikeouts and two walks.

“Marcus set the tone right off the bat and just was dealing,” Yelich said, “and we kind of fed off that and we were just rolling ever since.”

Stroman walked Carlos Beltran leading off the second, but the defense helped him out. Yadier Molina hit the ball to shortstop Brandon Crawford, who started a double play before Stroman struck out Javier Baez to end the inning.

Kinsler homered off an 0-1 pitch from Seth Lugo into left-center field in the third, scoring Jonathan Lucroy, who singled leading off.

Lugo of the New York Mets allowed four runs and five hits, struck out seven and walked four in four innings. The right-hander won his first two starts of the tournament, including in the second round against Stroman and the U.S. Stroman gave up six consecutive singles in a four-run first inning and took the loss against Puerto Rico last Friday in San Diego.

The Americans made it 4-0 in the fifth on RBI singles by Yelich and Andrew McCutchen.

Fans were on their feet chanting “U-S-A” when the Americans loaded the bases in the seventh with two outs. They were rewarded with Crawford’s two-run single that chased J.C. Romero, extending the lead to 6-0.

The U.S. tacked on another run on Giancarlo Stanton’s RBI single off Hiram Burgos past diving shortstop Francisco Lindor.