Miguel Cabrera could be back in Tigers' lineup Sunday

Miguel Cabrera could be back in Tigers' lineup Sunday 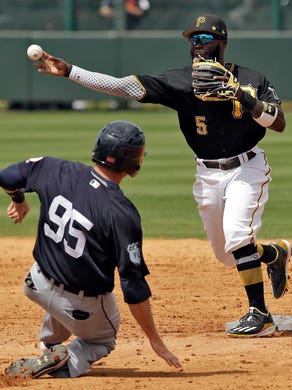 For the first time since his back tightened on him during the World Baseball Classic, Cabrera took batting practice on the field back in Lakeland.

“Hopefully he’s good to go,” manager Brad Ausmus said. “If he makes it through today, then he would be tentatively scheduled to play (Sunday).”

Ausmus said at most Cabrera would get two at-bats.

“We don’t want him to stand out there for too long,” he said. “It’s tough to DH him because Victor (Martinez) needs to hit.”

Cabrera told MLB.com Saturday morning that his back was feeling better.

Fulmer will get the ball for Tigers’ home opener

Second baseman Ian Kinsler is also expected to be in the lineup for the Tigers on Sunday. He was given a couple of days off after helping Team USA win the WBC championship.

Before the Tigers learned that starting right fielder J.D. Martinez would likely be out for most of April, Ausmus said he was 90 percent sure the replacement would come from within the organization.

“Our options are every outfielder still in camp,” he said.

On Saturday, though, after learning that Martinez will need three to four weeks before he can resume baseball activity, he lowered the percentage.

“I’m still fairly confident (the replacement) is in this camp,” he said. “But I will allow for a little more uncertainty.”

So, what’s the percentage?

Another fallout from the injury, Ausmus said, is that utility man Andrew Romine will be used more in the outfield than infield.

“He will play more center field, at least in the short-term,” Ausmus said.

Romine started in center field here Saturday in the 5-4 loss to the Pirates. Tyler Collins started in right and hit a three-run, opposite field home run. .

After a couple of shaky spring outings, left-handed late-inning reliever Justin Wilson has started to find his mark.

He looks different, too. Against the Braves Friday, he featured a mix of sliders and change-ups, along with his bread-and-butter mid-90s fastball and cutter.

“The slider is coming along,” Wilson said. “I thought it was better the last outing, though. It worked today, but out of my hand it felt better last time. But it’s coming.”

The change-up is still a work in progress.

“It’s my fourth pitch right now,” he said. “The slider is better. I got a ground ball with the change-up today, but it’s tougher to throw it in the (strike) zone than the slider. I don’t have much trust in it right now.”

Ausmus is encouraging Wilson to stay with the pitch.

“It’s hit or miss,” he said. “Sometimes it looks really good. Other times he slows down his arm and tips it off to the hitter. But it is certainly worth holding on to and see if it develops. Just pick your spots when to use it.”

After Anibal Sanchez left with a six-inning no-hitter and a 3-0 lead, the Pirates scored three of reliever Mark Lowe — though he didn’t get much defensive support. An error by minor-league shortstop Daniel Pinero started the rally and a double-play ball was botched by third baseman Dominic Ficociello. Pirates catcher Francisco Cervelli cashed it in with a two-run triple.

… After JaCoby Jones tripled and scored to put the Tigers up 4-3, the Pirates won the game with two runs in the bottom of the eighth off Kyle Ryan, who has been rock solid all spring.

… Shortstop Jose Iglesias got some work in on the back fields Saturday. He took seven at-bats in minor league games and got four hits. One of the hits was a home run off Braves pitcher Aaron Blair, who blanked the Tigers in the pivotal final series last season in Atlanta. “You mean we finally got a run off Aaron Blair?” joked Ausmus.