No more excuses: Tigers ready to fight for playoffs

No more excuses: Tigers ready to fight for playoffs 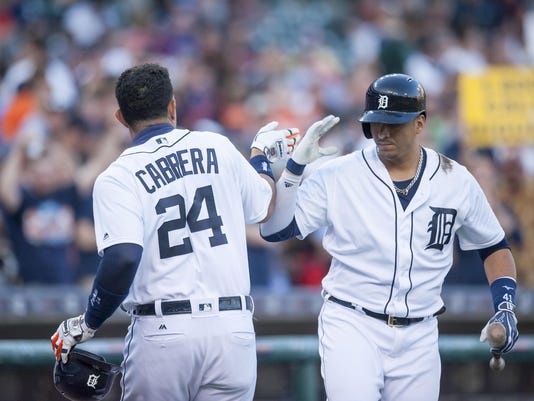 Miguel Cabrera and Victor Martinez, right, will again be key cogs in a Tigers lineup expected to churn out plenty of runs.(Photo: David Guralnick / Detroit News)

“This is my seventh year here and every year it’s been pretty much the same,” Martinez said. “High expectation. We need to forget about that and just get it done, you know? Go out there and play better baseball, all around, hitting and pitching. We’ve got to do everything if we want to win a championship.

“Everything has to go right.”

The woulda-coulda-shoulda game is over, for Martinez.

“We have had a really good team, but at the end we haven’t done what we want to do — win a championship,” he said. “It doesn’t matter. Yeah, we’ve got talent, this and that. But we’ve got to go out a just play better baseball.”

Talent. The Tigers in 2017 have talent across the diamond. Start with Martinez, who despite playing with a non-sports hernia for most of last season, produced 27 home runs and knocked in 86 runs from the designated hitter slot. Miguel Cabrera (38 homers, 108 RBIs) at first, Ian Kinsler (28 homers, 83 RBIs) at second — veterans, leaders, big-money producers.

On the left side of the infield is a budding All-Star third baseman Nick Castellanos and a defensive wizard, and one-time All-Star, shortstop Jose Iglesias.

Justin Upton (31 homers, 87 RBIs) and J.D Martinez (22 homers and 68 RBIs) man the corner outfield posts — though J.D. Martinez will miss at least the first month with a mid-foot sprain.

Behind the plate, and poised for a breakout season, is James McCann.

The only question mark is in center field. Eventually, that’s where JaCoby Jones, one of the organization’s most athletic prospects, will roam. But in the meantime, Mikie Mahtook, Tyler Collins and Andrew Romine will man that post.

It’s as potent as any lineup in the American League. But, again, that’s not floating Victor Martinez’s boat.

“So that shows you this game is not about individuals. It’s about playing as a team.”

Playing as a team. It’s stressed every year. But this year, it’s been more of a theme throughout the clubhouse.

“I don’t know if it’s been stressed any more or less, but baseball is a team sport,” manager Brad Ausmus said. “It’s a constant message. There’s not one person that’s going to win the division or take the Detroit Tigers to the playoffs. It’s going to be 30 people, if not more.

Staying healthy. That has also been a major theme of this camp.

“The story is the same,” Castellanos said. “It hasn’t changed. If we stay healthy, we’ve got a chance.”

Castellanos had 18 home runs and 58 RBIs before breaking his hand in early August, and he’s been scorching the ball this spring. He’s most likely going to end up batting second between Kinsler and Cabrera and could be the fulcrum that bumps the Tigers offense to another level.

But it’s not about him, Castellanos said.

“No matter what I do, I’m not going to be able to do it by myself,” he said. “The story is, the Detroit Tigers need to stay healthy. That’s the only story.”

But how can they control that storyline?

“By showing up every day, by getting your stuff done,” Castellanos said. “Get in the weight room, get in the trainer’s room — take care of yourself. Obviously, some injuries you can’t control, but that’s just baseball.”

The Tigers took their playoff fight to the final day last season and wound up two games short of a wild-card spot. The consensus is, if they had stayed even slightly more healthy — if J.D. Martinez had missed four weeks instead of seven, if Castellanos hadn’t missed most of the last two months, if Cameron Maybin could have stayed on the field — they’d have been in the postseason.

But, what’s the saying, “If ‘ifs’ and ‘buts’ were candy and nuts, we’d all have a Merry Christmas?” It doesn’t always work out that way.

“The other assumption before a season starts is, the young guys are going to get better and the veteran guys are going to maintain their level,” Ausmus said. “That doesn’t happen every year. But if guys like McCann, Nick, some of our younger pitchers — Daniel Norris, Matt Boyd, Shane Greene, Justin Wilson — continue to take a step forward and our established guys continue to do what they’ve done…

“It’s just not going to happen. That’s pie in the sky, as we’ve seen every year in baseball for every single team. It’s never pie in the sky.”

The truth of it, as Victor Martinez was saying at the top, is you fight for it. From April into October, you grind. You will endure injuries. You will endure slumps and losing streaks. But if you can hang in there, stay close, stay relatively healthy, then your talent can pull you through.

The Tigers have enough talent to make that their reality.

“Obviously, we have a lot of work to do to get better,” Upton said. “But we feel the same way we felt last year when we broke camp — we feel we have a chance to get where we want to be. Nothing’s changed this year.

“I think we’re coming in with that mentality of, ‘We believe it; now we’ve got to put in the work to do it.’ ”