Reliever Blaine Hardy, outfielders Alex Presley and Steven Moya, and veteran Omar Infante were among the latest cuts on Wednesday. 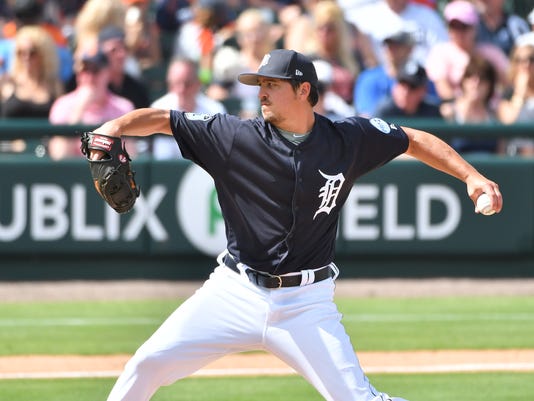 Lakeland, Fla. – You would think with the roster down to 29 players and J.D. Martinez starting the season on the disabled list that the major questions have been answered.

Regarding the 2017 Tigers, however, you would be wrong.

ESPN.com reported Wednesday afternoon that Moya had been put on waivers. If he clears, he could be re-signed to a minor-league contract – so there is a chance he remains in the organization.

Still, before Wednesday's exhibition against the Phillies, manager Brad Ausmus would not commit to the five-man rotation, though he said Anibal Sanchez would start in the bullpen and Matthew Boyd would be in the rotation.

He would not commit to the starters in the second and third games of the season-opening series against the White Sox – though Jordan Zimmermann and Daniel Norris are healthy.

Ausmus also would not commit to JaCoby Jones as the starting center fielder, though it appears clear that Mikie Mahtook and Tyler Collins will platoon in right field until Martinez gets back.

“There are a couple of things going on right now, so I want to wait to give you that,” Ausmus said, regarding the rotation and the starters in Chicago after Justin Verlander. “I am sorry for the cloak-and-dagger but we have to make sure we get our ducks in a row.”

Ausmus was asked if there was an injury that hasn’t been disclosed, and he responded, “There’s a lot of things you don’t know about.”

Michael Fulmer, who is scheduled to pitch the home opener on April 8, seemed to roll his right ankle during the first inning of his spring start in Tampa on Tuesday. He finished five innings, threw 86 pitches and said afterward that he was fine.

But it’s the second time this spring that he dinged his right ankle, and he was limping noticeably Tuesday night. He looked to be moving better in the clubhouse later Wednesday afternoon, though he did get treatment on it.

Whether the Tigers are waiting on a medical test on that or not, Ausmus wasn’t saying.

As for the cuts, Presley and Hardy were the most difficult, given how well they performed.

“Presley played as well as anyone in camp,” Ausmus said. “There are other things in play, unfortunately. Like we told him, at any moment it could change. Just keep doing what you’re doing.”

Presley hit .452 this spring with .528 on-base and .839 slugging percentages, and a 1.366 OPS. But Collins is out of minor league options and would have been lost on waivers. When Martinez comes back, Collins is expected to play a platoon role in center field.

“In a nutshell, my message to Presley was, ‘Life unfortunately isn’t always fair,’” Ausmus said.

“It came down to Hardy and Kyle Ryan,” Ausmus said. “Both pitched well in camp. It came down to more how they performed last season and both did pretty good last year, too. But overall, I thought Kyle was a little more consistent.”

Infante, who hit .351 this spring, was a long shot to the make the team. He was signed at a time when the Tigers thought there was a chance they might trade second baseman Ian Kinsler. But Infante, 35, showed major league teams that he still has some game left.

“He showed he’s still got life in his body and he can still play baseball at a major-league caliber,” Ausmus said.

Ausmus said Infante told him and general manager Al Avila, if a big league club doesn’t pick him up, he would go to Triple-A Toledo, at least for the start of the season. He has an opt-out clause and can leave whenever he wanted.

Stumpf, a Rule-5 draftee, has indicated to the Tigers that he would like to remain in the organization if he clears waivers.

As for Pelfrey, the Tigers have been shopping him around the league, indicating to teams that they would be willing to pay off the contract. Thus far, there have been no takers. Like they did with Mark Lowe, who was owed $5.5 million, the Tigers will likely give him an unconditional release.

That means they will have had to eat $13.5 million in contracts for players that were released.