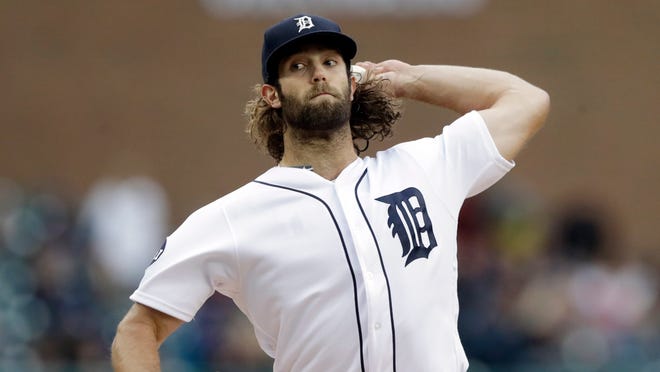 Detroit — Sparky Anderson used to say that by the quarter pole of the season, Game 40, you had a pretty good idea of what kind of team you had.

That benchmark, however, is not universally accepted.

“I am going to respectfully disagree with Sparky,” Tigers manager Brad Ausmus said. “I don’t think you know what kind of club you have until 162 games.”

After their 5-3 loss to the red-hot Texas Rangers on Friday, the Tigers remain largely undefined at 20-20 one-quarter of the way through.  And the lineup Ausmus posted Friday was indicative of why he’s not accepting any rash assessments of his team.

Both Miguel Cabrera (oblique strain) and Victor Martinez (paternity leave) were absent. And a large portion of the back end of his bullpen was unavailable because of recent use (Shane Greene, Alex Wilson, Blaine Hardy).

“It’s tough to assess when you’ve had the number of injuries we’ve had and people missing,” he said. “It would be nice to get everyone healthy and on the field at the same time for an extended period of time.

“We really haven’t had that for over a year now.”

Another reason it might be premature to pass binding judgement: Friday night’s starter, left-hander Daniel Norris, is still searching for his footing. He’s been alternating quality starts with rocky starts — and this one was rocky.

For the third straight start, he did not finish the sixth inning, allowing five runs.

Henning: Tigers can put on show but title not realistic

“He’s still very young and young pitchers tend to go through this, and it can take seasons where there is inconsistency in your command, you delivery and your release point — all are obviously related — and it can come and go quickly.

“The emotions of the game can get to a young pitcher, too. At some point, Daniel will rein it in, he’ll harness his emotions, he’ll have a consistent delivery and release point and he will be a dominant pitcher. Because his raw stuff is dominant.”

That was evident Friday. There were pockets of brilliance from Norris, as there typically are. He struck out a season-high eight in less than six innings. He only allowed three hits through four innings, but then gave up four hits in the sixth and left with two outs and the Tigers trailing 5-1.

“I’m just worried about losing,” Norris said. “There is good in every start, even the real bad ones. I can look at that tomorrow. But right now it’s kind of hard to take. I was looking forward to going out here and helping us win and I lost it for us. It’s a bummer.”

He walked two batters and hit another, he was behind in the count often, and he paid for throwing predictable pitches in hitter’s counts.

He center-cut a 2-0 fastball to Mike Napoli in the fourth inning and it landed beyond the bullpens in left field. He left a 2-0 slider out over the plate to Joey Gallo in the sixth with one runner on. That ball was struck with 115-mph force and traveled 439 feet to right field, according to StatCast.

“I have to get ahead,” Norris said. “Two-oh counts aren’t a good place to be for a pitcher.”

The other two runs came in a 31-pitch third inning, an inning in which Norris allowed only one hit, a single. But he walked two, one with the bases loaded, and hit another. The second run scored after the Tigers botched a double-play ground ball.

“I lost something with my release point,” he said. “I wasn’t letting the ball go I like usually do. It felt like I was guiding the ball. That’s been happening over a two- or three-batter span almost every start. It’s more of a mental thing.”

Ausmus believes adrenaline is a factor in Norris’ inconsistency. He gets too amped and loses his rhythm.

“Right now, he only knows one gear,” Ausmus said. “What you learn the longer you play, especially a starting pitcher, is there has to be a little bit of pace to your game. You have to take the bull out of the china shop a little bit.”

Two struggling Tigers relievers finished it off in good form.

Anibal Sanchez faced the minimus seven batters in his 2 1/3 innings. The only hit against him, by Delino DeShields, was erased on an unsuccessful bid to steal second base.

“I want every player in a Tigers uniform to do well, but those guys have taken some heat early in the season. But it’s a long season. It was encouraging to see both pitch well.”

The depleted and reconfigured Tigers lineup didn’t have enough juice to override the early deficit. Rangers starter Nick Martinez allowed only an unearned run in the fourth. A two-out throwing error by shortstop Elvis Andrus helped the Tigers load the bases.

Andrew Romine then slapped a hard single to right field to score the run.

They added a second run off reliever Tony Barnette in the sixth on a walk to Justin Upton, single by Nick Castellanos — who was dropped in the order from second to sixth — and a sacrifice fly by James McCann.

They only managed three hits off three Rangers relievers. But in the bottom of the ninth, closer Matt Bush gave up a single to Jose Iglesias and walked Tyler Collins with two outs.

That brought up J.D. Martinez. He hit a ground ball in the hole at short. Andrus fielded it but threw it wild, allowing Iglesias to score.

With the tying runs on first and third, Bush struck out Alex Avila to end the game.

It was the Rangers’ 10th straight win.

There were some defensive highlights by the Tigers in this one.

Norris made a sensational athletic play to retrieve a bunt by Shin-Soo Choo in the first inning. He slipped, did a 180-degree pivot, raced to the ball and glove-flipped it to first for the out.

In the sixth inning, right fielder Collins slipped as he went to field a single by Jonathan Lucroy. But he righted himself and fired a seed to second base and threw out Lucroy.

In the seventh, McCann, who had nabbed only one runner trying to steal this season, got No. 2 — with a perfect throw to get the speedy DeShields.