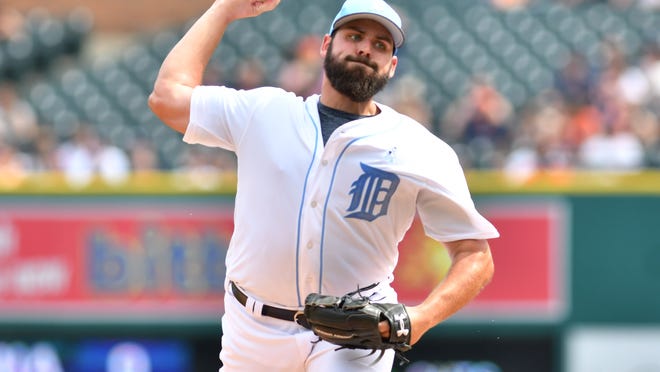 Detroit — The top of the seventh inning Saturday was a big ball of frustration for the Tigers.

They entered with a 2-1 lead and were one pitch from leaving with a 2-1 lead. Instead, the Rays slapped three straight singles, two off starter Michael Fulmer, and walked off with a 3-2 lead that they would not relinquish.

After Daniel Robertson’s two-out single tied the score, Fulmer quickly got ahead of the next batter, No. 9 hitter Derek Norris, 1-2. Robertson runs well, and manager Brad Ausmus had a hunch that he might be running.

“Nine-hole hitter up, guy on first, two out — that’s the time to take a chance and risk getting caught stealing to get a runner into scoring position,” Ausmus said. “It’s the classic time to try to steal.”

So Ausmus, who controls the running game from the bench, signaled for Fulmer to throw over to first and keep Robertson close. Fulmer threw once, twice and after the third throw-over, first baseman Miguel Cabrera became agitated.

He motioned toward the bench to have Fulmer throw to the plate. It seemed he was concerned that all the throw-overs might get Fulmer, who was at nearly 100 pitches, out of rhythm.

On the next pitch, Norris singled, which would set up the winning run. Cabrera walked toward center field muttering to himself as Ausmus came to take Fulmer out of the game.

“That’s not my concern,” said Ausmus, who said he didn’t notice Cabrera’s agitation. “If I feel they might run, I am going to throw over. That’s my call. I didn’t notice (Cabrera) but quite frankly, I don’t care about it.”

Cabrera wasn’t immediately available for comment after the game. Fulmer said throwing over didn’t bother him.

“No,” he said. “It all comes from the dugout. Brad might have had something. I am going to throw over when he says to, plus on my own. I just pick over when I am told to. That’s wasn’t anything.”

The Tigers moved right-handed pitcher Joe Jimenez up to Triple-A Toledo. Just off the disabled list Friday, he pitched one game at High-A Lakeland. He took the place of right-hander Arcenio Leon, who was placed on the DL.

… Anthony Gose’s transformation from outfielder to pitcher has hit a snag. In his last outing he gave up four runs in 1/3 of an inning. Throwing strikes has become an issue. He threw just five in 18 pitches. His ERA at Lakeland is 18.69.

… Outfielder Jim Adduci (oblique) took batting practice on the field for the first time since his injury on May 11.