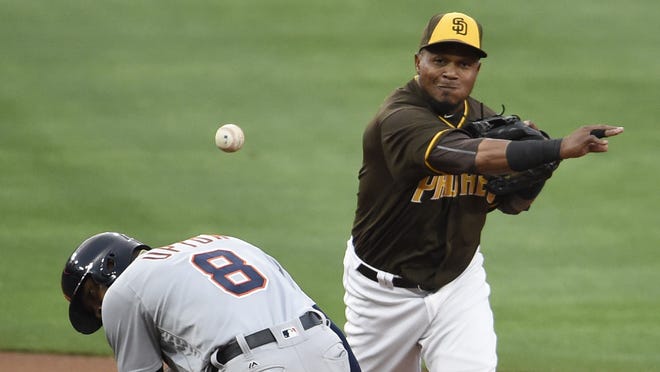 San Diego, Calif. — General manager Al Avila, speaking before Friday night’s game, made official what has been widely suspected throughout baseball — the Tigers are open to listening to trade proposals.

Avila stopped short of saying the team was in pure sell mode. He also said he was not aggressively pursuing trades. But his phone lines are open.

“No. 1, we are still trying to win and we’re still trying to make things better, somehow, some way,” he said. “Our hope is we’ll get on the right track. At the same time, a lot of teams wait until July 1 to decide (whether to be buyers or sellers).

“But right now, based on where we’re at and how we’ve been playing, I’ve got to keep all options open. And I have to start thinking about listening to clubs. If there is any interest out there, I have to open myself up to being flexible and listen to what might come our way.”

J.D. Martinez, Ian Kinsler, Justin Wilson, Alex Avila, Jose Iglesias, even Justin Verlander, have had their names mentioned in trade rumors around the league as far back as last winter.

“At this point, that’s where we’re at,” Avila said. “The players know the situation. These guys have been around the block a little bit and they understand — you win and you move forward.

“You don’t win, then obviously we have to be open to whatever changes come our way. We’re all geared for that.”

Manager Brad Ausmus said Avila’s clearing of the air regarding the team’s immediate direction didn’t change a thing within the clubhouse or on the field.

“We’re still going out to win,” he said. “If we start winning, I think we can convince Al to pull his ear from the floor a little bit. But it’s on us to do that.”

The Tigers and Mets have been among the first to announce their intentions leading up to the July 31 trade deadline. With there being a glut of teams still in playoff contention, there might be more buyers than sellers, which might be partly why Avila has gotten out front of the market.

“In our situation right now, it behooves us to experiment and explore,” he said. “I’m not going to be out there pushing anybody, by any means. I told you guys that’s not the way I operate. But clubs will know that we will listen if there’s anybody that’s interested.”

Avila agreed with Ausmus — there is still time for the team to convince him to hold pat.

“These guys are still going to go out there and playing hard and hopefully we can turn this around,” he said. “Because you don’t make a deal overnight. Sometimes it takes days or weeks. We’re still well over a month before the trading deadline hits. We’ve got to get through the month of June and then we’ve got all of July.

“A lot of things can happen between now and then.”

And, as he experienced over the winter when he made a lot of his players available on the trade market, nothing can happen.

“If there’s something that makes sense, then maybe we do something.”

On maintaining his support for Ausmus:

“He gets a lot of the blame for throwing K-Rod (Francisco Rodriguez) out there. Well, it’s part of the process that we talked about, to try to get him going. Because if he didn’t do that, we probably should have released him a month ago. That was not in the equation at that point.

“Now we’ve come to that point. So a lot of things that have gone on are, quite frankly, not his doing. I think some of that blame is really misplaced. I think it’s more frustration (of the fans). I’m frustrated. We’re not happy. It’s just frustration, and I think people are lashing out. We’re all working hard to try to make this work.”

On how owner Christopher Ilitch is taking things:

“I actually talked to him last night before we decided to release Frankie. He’s as frustrated as we all are. We’re hoping for a better season. But at the same time, he understands the situation. If we have to make some changes, he’s open to that too.

“At this point, we’re all in it together and trying to see which way this team is going to go. But if an opportunity comes our way and we feel it’s going to make this organization better — that’s the avenue we take.”

On whether Bruce Rondon is still viewed as the club’s closer of the future:

“No, not at this time. I can’t say that. We’ve been up that road too many times. At this time, we’re going to evaluate him just like everybody else. Every day he goes out there he’ll be evaluated. And we’ll move forward and see what happens with him at that point.”