With apologies to Forrest Gump, starting rotations are part of life’s box of chocolates. 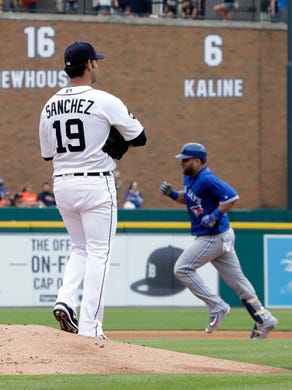 Second baseman Ian Kinsler (3) of the Detroit Tigers throws out Jose Bautista of the Toronto Blue Jays at first base to complete a double play during the second inning. Duane Burleson, Getty Images
Fullscreen

Blue Jays third baseman Josh Donaldson bobbles the ball on a ground ball off the bat of Tigers' Nick Castellanos in the 11th. The error puts two on base. Robin Buckson, Detroit News
Fullscreen 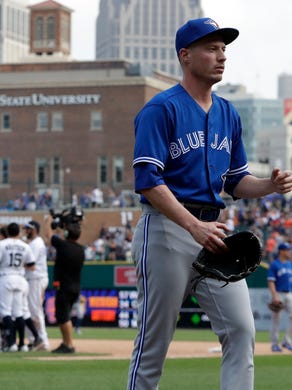 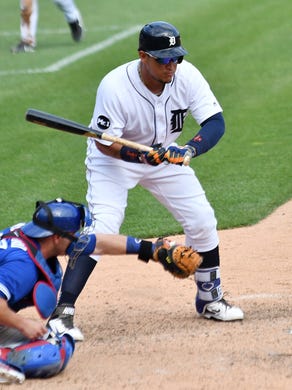 Alex Avila celebrates after scoring the winning run on a bases-loaded walk by Miguel Cabrera in the 11th inning.(Photo: Duane Burleson / Getty Images)

Detroit – With apologies to Forrest Gump, starting rotations are part of life’s box of chocolates.

The Tigers weren’t sure this weekend what they’d get in terms of a starter Tuesday night against the Kansas City Royals at Kauffman Stadium. But they got their answer Sunday.

It will be Matthew Boyd, yanked once again from Triple A Toledo’s roster, and inserted onto the lineup card as a replacement for Daniel Norris, who will begin a rehab stint as he heals from his strained groin.

At least until his last start, Thursday against Columbus, Boyd had been pitching smoothly for the Mud Hens, allowing only two runs in a 20-inning span from June 27 through July 7. He had a tougher time last week against the Clippers when he was socked for nine hits and five runs in 6.2 innings, although he struck out eight batters.

Boyd has pitched in 11 games for the Tigers, all starts, in 2017 and hasn’t been the master of ceremonies he was during Grapefruit League games in Florida, when he was the Tigers’ most impressive March starter.

Norris hasn’t pitched since July 5, when he had his latest bumpy outing, a four-inning, five-run, seven-hit, four-walk ordeal against the Giants.

It was believed the Tigers might have been pondering some mind-clearing time for Norris at Toledo as he sat with a 5.29 ERA and a string of starts that had featured too many bad innings spliced among his happier work.

The sore groin made matters academic. He went on the disabled list and won’t return to the rotation any earlier than next week.

He is definitely amazing. Few, if any players, in memory have displayed the acute vision and strike-zone discernment routinely practiced by Alex Avila, whose leadoff walk in the 11th inning Sunday helped hand the Tigers a 6-5 victory.

Avila was down, 0-and-2, against left-hander Jeff Beliveau, which is the brand of matchup that in years past might have been viewed as an automatic strikeout.

But this is 2017. And that career on-base percentage, which was .352 entering Sunday, was about to climb another tick Sunday as he worked Beliveau for a seven-pitch free pass that put Avila in shape to score the winning run.

Avila has a format as unique as his ability to judge pitches precisely. He sees the ball approaching not only home plate, but a mental grid in which the strike zone’s perimeter is clear and distinct. It enables him, even in a few hundredths of a second, to decide if a pitch is acceptable or not.

And yes, he acknowledged Sunday, there are times a walk can feel as gratifying as a hit. Particularly when you’ve been down 0-and-2 and a few minutes later you’re scoring a winning run.

“I enjoy it for sure,” said Avila, whom Tigers fans won’t enjoy seeing head elsewhere, which is a high-probability event as the Tigers talk trades ahead of the July 31 deadline. Avila is known to be sought by multiple contenders.

“You always try to make it a quality at-bat,” he said, emphasizing hits are always preferred. “But if you’re down 0-and-2 and you get a walk, you chalk that up as a victory.”

Avila said his hitting approach “changes slightly” when he finds himself in the kind of hole he had dug against Believeau.

Of course, he can’t always trust that his view on a strike or on a ball is shared by umpires. The fact is, video tends often to support Avila’s version.

The Tigers’ bullpen had fairly close to a perfect five innings Sunday.

Daniel Stumpf, Alex Wilson, Bruce Rondon, Justin Wilson, Shane Greene and Warwick Saupold pitched scoreless baseball from the seventh inning through the 11th. The Jays’ only hit was a single off Shane Greene.

Saupold got the victory and now has a 2-1 record to team with his 2.14 ERA. He has shown he can spot-start, pitch long relief, or handle short stints. It appears to make no difference to him whom the Tigers signed out of Australia in 2012.

“I know that’s my role,” he said, who believes his Aussie background, and a culture that emphasizes accepting life’s variations, is at work in making him as comfortable in one slot as with another.

RHP Zimmermann, Tigers: He keeps saying his stuff is good, he feels great, etc., but the results aren’t in line with a pitcher’s pronouncements. Simply must pitch better. Not much to debate.

LHP Vargas, Royals: Take a look at the numbers. They don’t lie. Vargas has shown the Tigers earlier this year that his mix-and-match combo of sizzling stuff is no fun. Likely won’t be tonight.