Notice that the Tigers’ most heavily-pursued trade piece, by all accounts, is a pitcher who this year carries a salary of $2.7 million.

Bob Wojnowski, John Niyo, and Lynn Henning break down the move already made and the moves to come for the Detroit Tigers at the MLB trade deadline. 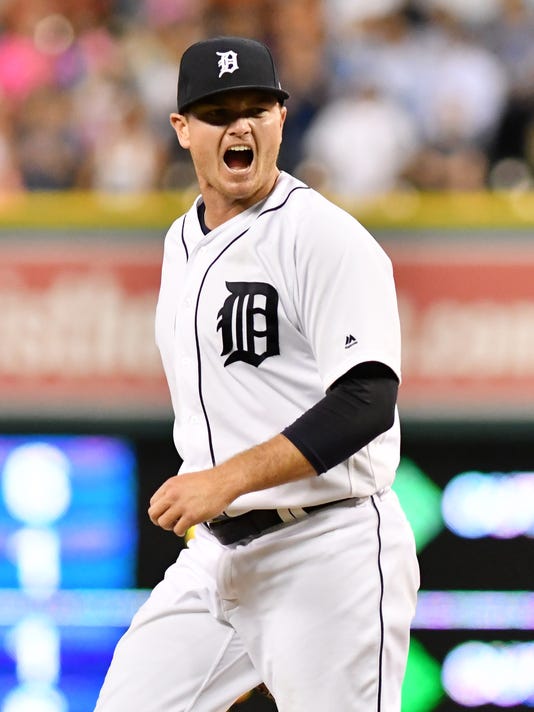 Al Avila is shifting between jobs this week. Half the time he is Tigers general manager. He has a second gig as an auctioneer, overseeing bids for heavily craved Tigers reliever Justin Wilson.

Notice that the Tigers’ most heavily-pursued trade piece, by all accounts, is a pitcher who this year carries a salary of $2.7 million, about one-eleventh the amount Justin Verlander will be paid.

This bold-faces an important point as the Tigers wade through July and a quest to make as many trades as a team from Detroit deems constructive.

This isn’t about money. Truly, it’s not about money. Except in a context far smaller than a team’s overarching mission to get talented youth transplanted into an organ-failing minor-league system.

It is the biggest of many myths surrounding the Tigers less than two weeks before July’s trade deadline shuts most of the summer’s serious shopping aisles.

Chris Ilitch has succeeded his late father, Mike, as primary Tigers overseer. It was long assumed that when Chris took charge the business operation would turn leaner. The old profligate days of writing semi-blank checks would cease. The Tigers’ gargantuan payroll, at least considering Detroit’s market realities, would begin to recede.

But the team was headed in a leaner direction even had Mike Ilitch not died in February. Cycles were about to change as an older, egregiously expensive roster began to age and as a team’s best days were behind it.

Eye toward the future

Chris Ilitch has carried on, almost identically, the path his dad already had agreed was more practical and advisable in the immediate years ahead.

What must be understood is that Chris has not, for a moment, ordered any kind of fire sale or massive payroll off-loads in 2017, according to a source knowledgeable of the Tigers’ plans.

The Tigers got a taste of what was to come last autumn when Chris, rather than his dad, whose health was steadily failing, led the Tigers’ entourage at the 2016 owner meetings at Chicago.

Chris already was in tune with big-league baseball’s bold new world. Teams were trimming contract dollars and years. They were viewing minor-league prospects as treasure mightier than gold doubloons.

The Tigers had hoped to begin dealing older, higher-priced talent for fresh blood. But the market suddenly had turned on its ear, only a few months after Mike Ilitch had authorized two of the last, big, free-agent contracts – to Jordan Zimmermann and Justin Upton – baseball’s market then was justifying.

The Tigers already were headed for a luxury-tax payment of $10 million or so because of their 2016 overrun. They were looking at stiffer fines in 2017.

But rather than order a jettisoning of players and salaries, regardless of return, Chris Ilitch told Avila: Hang tight. Don’t make any moves you don’t believe are fair or worthwhile.

We can withstand this, he said. In fact, we are going to endure this, even if the penalties unfairly sock it to a club of our comparatively lightweight market size.

The Tigers need not make a single deal due to payroll, knowing that two objectives are served by a single mission. As they get younger and more athletic in gearing up for the long term, they likewise become less costly on the fiscal side.

They realize heavy money is coming off the books, steadily, after this season. They have agreed to absorb any amount necessary, including luxury-tax bruises, rather than spin off players at a bad discount.

They are prepared for the long haul and see no issue with whatever color ink, black or red, comes their way in ensuing seasons.

Down the road, if free agency and big checks become part of a sensible competitive equation, Chris Ilitch – if the family still owns the Tigers – will have pen in hand and will authorize what’s needed, within reason.

At least, that is what has been communicated, and the Tigers front office has zero reason to believe anything dramatic will change.

Ah, but a hundred hands are raised, all with one question waiting to be asked:

If dollars were no problem, why was Cameron Maybin dealt last November for one Victor Alcantara, a reliever who, put it this way, was not quite Justin Wilson when it came to opposing GMs and their salivary glands?

The answer isn’t in conflict with the club’s stance.

Maybin already was on the hook for a $9-million payday difficult to justify for a 30-year-old outfielder whose 2016 season saw him hit 60 points above his career average. He had little power, wasn’t a Gold Glove defender, and would have slammed the Tigers for about $13 million by the time his luxury-tax charge was computed.

This simply wasn’t a defensible sum to pay when other options existed, even if those options excited no one this side of Mikie Mahtook and his family.

Maybin, it should be noted, is batting .238 for the Angels with a .710 OPS. He’s a good player. But not the kind of player who would reasonably command what the Tigers were obliged to pay him. Not when their record probably would be the same and when Mahtook, whom Avila got in a January trade, has turned out to be just fine, all at a cost of $541,000.

Rather than becoming the detached, sharp-pencil skinflint a frightened fan feared once his father passed, Chris Ilitch has been more involved, more accommodating, more supportive, and, frankly, smarter in understanding baseball’s intricacies, than Tigers knee-knockers were willing to believe.

That bodes well for the days ahead. Avila can make moves without feeling a bayonet in his back. The Tigers can pursue a combination demolition-reconstruction of their roster and not be pressured into making decisions that will only delay better baseball days ahead.

July’s deals already have begun. The J.D. Martinez trade, which came down Tuesday, was not a product of austerity, but rather a concession that a player who next month turns 30, and who plays outfield in a ballpark where defense counts, probably wasn’t the right guy to tie up for five years and $100 million, or whatever free agency delivers to Martinez this autumn.

Not when he could be dealt for badly needed infield prospects the Tigers believe, in at least two cases, will play in the big leagues.

Other trades will follow. Note that there won’t be any swapping of bad contracts. Nor will there be giveaways of existing Tigers flesh. The deals might not be any more popular with customers than was the Martinez bartering, but they’ll be made with the idea of washing fresh blood into the Tigers’ system.

And that’s the only way a better baseball product, with playoffs again becoming part of the autumn scene at Comerica Park, will become reality. It’s a fact understood by an owner who is different, for sure. But an owner every bit as smart as his dad.