This was a horror show for the first three innings, and then it devolved into a bludgeoning.

Salvador Perez of the Kansas City Royals is helped up by Mike Moustakas after being hit by a pitch during the third inning. Jamie Squire, Getty Images
Fullscreen

Kansas City Royals' Salvador Perez (13) avoids the tag by Detroit Tigers shortstop Jose Iglesias (1) during the third inning. Perez was safe with a stolen base on the play. Orlin Wagner, AP
Fullscreen

Catcher Salvador Perez of the Kansas City Royals steals second base as Jose Iglesias of the Detroit Tigers is late applying the tag during the third inning. Jamie Squire, Getty Images
Fullscreen 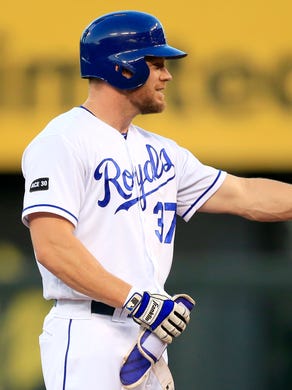 Kansas City Royals' Brandon Moss gives a thumbs-up to teammates after his two-run double against the Detroit Tigers during the third inning. Orlin Wagner, AP
Fullscreen

Catcher Salvador Perez of the Kansas City Royals is congratulated by teammates in the dugout after scoring during the third inning. Jamie Squire, Getty Images
Fullscreen

Starting pitcher Michael Fulmer of the Detroit Tigers is pulled from the game by Brad Ausmus during the third inning. Jamie Squire, Getty Images
Fullscreen

Detroit Tigers' Andrew Romine (17) and Jose Iglesias, left, return to the dugout after scoring on a double by Ian Kinsler during the fifth inning. Orlin Wagner, AP
Fullscreen

Detroit Tigers starting pitcher Michael Fulmer fumbles for the ball as the Kansas City Royals' Jorge Bonifacio scores on a hit by Salvador Perez and a throwing error by shortstop Jose Iglesias in the first inning. John Sleezer, TNS
Fullscreen

The Kansas City Royals' Salvador Perez scores under the tag of Detroit Tigers catcher James McCann on a groundout by Alcides Escobar in the first inning. John Sleezer, TNS
Fullscreen

The Kansas City Royals' Salvador Perez scores under the tag of Detroit Tigers catcher James McCann on a groundout by Alcides Escobar in the first inning. John Sleezer, TNS
Fullscreen

The Kansas City Royals' Eric Hosmer was greeted in the dugout after scoring on a single by Mike Moustakas in the first inning. John Sleezer, TNS
Fullscreen

The Detroit Tigers' Nicholas Castellanos flips his bat to the ground after hitting a fly ball out to end the top of the fifth inning. John Sleezer, TNS
Fullscreen

Kansas City, Mo. — Fortunes change in a hurry in this game.

On Wednesday night, the Tigers were two outs from winning their fifth straight game and moving within four games of the Central Division lead.

After the third inning Thursday, they were in an 8-0 hole, playing some of their worst baseball of the season and on their way to a second straight loss.

The Tigers did regroup and made a brief push to get back into the game, but the early damage was fatal. They left Kansas City stinging from a 16-4 drubbing and a split of the four-game series, with a weekend battle looming in Minnesota where the Twins are a half-game behind the division-leading Indians.

“It wasn’t a lot of fun,” manager Brad Ausmus said. “It’s a little embarrassing. The first inning was embarrassing to some degree. It wasn’t a lack of effort, we just didn’t make plays. In terms of getting pounded, it happens to every team once in a while. … It’s just unfortunate timing. We were trying to win a series.”

This was a horror show for the first three innings, and then it devolved into a bludgeoning.

The Tigers made three physical errors and one costly error of omission in a four-run Royals first inning. They hadn’t made three errors in one inning since May 1, 2010.

“It was an ugly inning,” Ausmus said. “There is no other way to frame it. Maybe the ugliest inning we’ve had defensively since I’ve been here.”

Wojo: Tigers should line up suitors for Verlander

Nick Castellanos made an errant throw to first base to start the inning on a ground ball by Whit Merrifield. Mikie Mahtook failed to come up with the ball cleanly in right-center on a base hit by Jorge Bonifacio, then overthrew the cutoff man, which allowed Merrifield to score.

With runners at first and second, Salvador Perez blooped a single into shallow left. Shortstop Jose Iglesias picked the ball up and didn’t notice that both Royals runners were at third base.

Instead, he made a hasty and wild throw to the plate, which allowed Bonifacio to score from third.

“He assumed the guy was going home,” Ausmus said. “He turned to make a throw to home not realizing Hosmer was running up his tail. Bonifacio was in no-man’s land. I guess Iggy’s response was, the guy is going and I have to get the throw home as quickly as possible.”

After an RBI single by Mike Moustakas, Alcides Escobar hit a hard ground ball to first base. Miguel Cabrera stepped on first and then had Perez trapped between third and home. Cabrera threw to third base. Castellanos’ throw to the plate was in time to get Perez, but he slid around the tag of catcher James McCann.

Worse, it was a 37-pitch inning for starter Michael Fulmer. And with the heat index at a dense 107 degrees, he was exhausted — physically and mentally.

“When you make 40 pitches in 100-degree heat, you are probably not going to be 100 percent the rest of the game,” Fulmer said. “But that’s all on me. I should have made some better pitch selections and obviously made better pitches.

“I don’t know to say it, but you have to understand this stuff happens sometimes. That’s the case for all of us. As a pitching staff, we have to take accountability for it.”

Ausmus, though, said the heat was no excuse for the sloppy first-inning defense.

"We made some mental mistakes, but I don't think the heat was a factor," he said. "You are going to make mental mistakes, it's part of being human and being a baseball player. They aren't robots. It was very warm, but this was the first inning. If it was the eighth, I could understand where the heat might've been wearing on you. Not the first."

The toll for Fulmer's 37-pitch first was paid in the third when the Royals knocked him around like nobody has in his young career. A 444-foot home run by Eric Hosmer, two-run double by Brandon Moss, RBI double by Alex Gordon — it was 8-0 and Fulmer was done.

“It comes all back onto me,” he said. “I think I tried to strike more guys out because I had runners on third, or second and third, with less than two outs. I threw a lot of balls and didn’t attack the zone like I usually do.

“They made some good swings on balls I thought were good pitches. They had some soft-contact hits and some hard-contact hits, too. Some days are going to be like that and there’s not much you can do.”

It was the shortest outing of his career, 2 2/3 innings, and the first time he’s allowed seven or more runs (though three were unearned).

Fittingly, it was a mental miscue by the Royals that opened the door briefly for the Tigers. With two on and one out in the fifth, Andrew Romine hit a hard grounder to first baseman Hosmer — tailor-made, inning-ending double play. Except, pitcher Danny Duffy didn’t cover first base for the return throw.

Iglesias followed with an RBI single and Ian Kinsler with a two-run double.

The Tigers made it 8-4 and chased Duffy in the sixth — a double by Justin Upton and an RBI single by Cabrera. With that, Cabrera became, according to Elias, the 33rd player in major league history to achieve 1,600 RBIs.

Comeback quelled. Reliever Chad Bell, after he had shut the Royals down in the fourth and fifth, gave up a home run to Merrifield, then four straight singles in a four-run sixth — the Royals didn’t look back.

“We looked good in the middle innings,” Ausmus said. “But the Merrifield home run and the three other runs they tacked on there was the final nail.”

Well, not the final nail. The Royals batted around in the eighth inning against Alex Wilson and tacked on yet another four-spot. Moustakas ripped his third hit of the game and drove in his third run. Escobar doubled in two and Moss (four RBIs), singled home two more.

“Alex has been struggling,” Ausmus said. “He’s getting the ball in the air and doesn’t look as crisp as he did early in the year. We’ve got to find out why.”

The Tigers won the first two games of this series and had Justin Verlander and Fulmer going in the next two. So to come out with a split was a serious letdown.

"Stinks," Fulmer said. "I like to think of myself as a guy who can go out and get a win every fifth day and I am sure JV does too. It's disappointing."