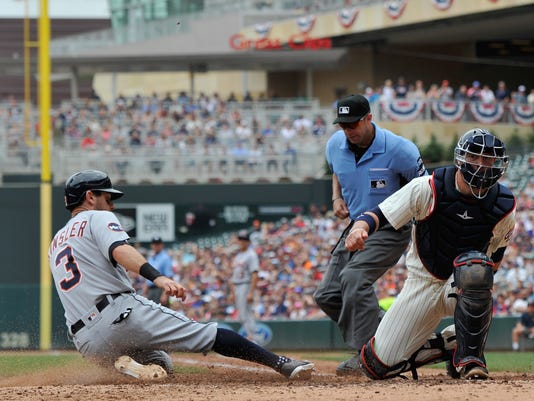 Detroit Tigers Ian Kinsler slides safely as the ball gets past Minnesota Twins catcher Chris Gimenez defending home plate during the third inning of the game on July 23, 2017 at Target Field in Minneapolis, Minnesota. Tigers go on to beat the Twins, 9-6.(Photo: Hannah Foslien, Getty Images)

Minneapolis —  He was stunned for a brief second by the question.

After the Tigers took a 9-6 win, a four-hour, 19-minute whitewater raft ride over the Twins Sunday, James McCann was asked how it felt to be in the role of spoiler in the Central Division.

“I don’t think anybody in this room is of the mindset that we are spoilers,” he said. “Not at this point of the season.”

Manager Brad Ausmus was asked if his team took pride in beating a team that’s in playoff contention.

“Are you saying we are out of contention?” he asked. “We take pride in beating everybody.”

The Tigers, 6½ games out of the division lead, took two of three from the Twins, who were a half-game back at the start of the series.

“We’ve been fighting our tails off all year,” said reliever Shane Greene, who got the Tigers through a pivotal situation in the seventh inning. “We are going to keep doing that.”

This game was bananas. The 4:19 was the Tigers longest nine-inning game of the season, and it was the longest in Target Field and Twins history.

“We can play some long games,” Ausmus said. “But I will play as long as we have to as long as long we come out with the W.”

■ Jose Iglesias, after being thrown out at second base in the ninth inning Saturday night in a one-run loss, broke a 2-2 tie in the sixth inning with a 430-foot home run into the second deck.

“That guy over there (pointing to McCann) said it was 445,” Iglesias said. “If it was 430, that wasn’t my farthest. But it was deep enough to put the team in a position to win the game.”

Iglesias, three hits on the day, also added a clutch, two-out RBI single in the eighth, which reestablished a two-run lead.

■ Greene relieved starter Matthew Boyd in the bottom of the seventh, and soon found himself in a bases-loaded, no-out predicament. It was a 4-2 game at that point.

“He’s fearless,” Ausmus said. “I don’t really worry about the situation scaring him.”

Greene struck out pinch-hitter Jason Castro looking at a breaking ball. He then got Zack Granite to hit into what looked like an inning-ended double play. But Gold Glove second baseman Ian Kinsler booted it — a run scored and the bases were still loaded.

Brian Dozier, who homered in the ninth, was the next hitter and he laced a 2-2 fastball (96 mph) down the right field line, just foul. It would have cleared the bases. Greene, though, was undaunted. He came right back with another 96-mph fastball and struck out Dozier.

More: Playoff run would be tough hurdle for Tigers

“I went out to talk to him after the foul ball,” McCann said. “We agreed that after that swing, there was no way he’d be looking for another fastball. Greene put it in the exact same spot.”

Greene then proceeded to engage in a 13-pitch battle with Eduardo Escobar, who had already produced a monster home run in the game.

Greene threw one mid-90s fastball after another once the count when full. Finally, Greene reared back and threw a 96-mph heater past him to end the inning.

“It was a huge at-bat,” Ausmus said. “To me, that was the game. If he didn’t get him out right there, if he ended up walking him, the game is tied and it changes the whole complexion of the game. It changes our pitching usage, changes everything.”

■  McCann loves hitting in Target Field. He came in hitting .395 with a 1.275 OPS here and added to that. He produced two doubles and a single. His second double started a key two-run rally in the eighth that put the Tigers up 6-3.

He went to third on a single by Alex Presley, then Iglesias and Kinsler delivered RBI singles off right-hander Tyler Duffey.

■ Presley extended his hitting streak to 10 games, rapping singles in the seventh, eighth and ninth innings, raising his average to .344. Two of the hits were off left-handed pitching. His base hit in the ninth capped a three-run inning that all but sealed the win.

■ Justin Wilson got the final four outs, first rescuing Bruce Rondon in the eighth. Rondon, who had pitched scoreless baseball in eight of his nine outings since coming back from Toledo, gave up a two-run single to Joe Mauer, which cut the lead to 6-5. He left with the tying run on second base and two outs.

Wilson came in and struck out Castro on four pitches.

The Tigers bullpen allowed three runs in three innings. The Twins bullpen was tagged for seven runs in 4⅔ innings. Three of the runs were scored off their closer Brandon Kintzler.

■ Boyd's effort was more gritty than pretty. He wasn’t razor sharp, but his battle level was off the charts. He fell behind nine of the first 13 hitters he faced, pitched in hitter-friendly counts most of the day, and yet, after six innings he had allowed just two runs and four hits – and he posted a career-high eight strikeouts.

“The pitch before, the batter before, the inning before, it shouldn’t have any bearing on you,” said Boyd, who picked up his second straight win since being recalled from Toledo. “You have to live in the moment and execute the pitch at hand. That’s been my main focus and it was again today.”

The one mistake he paid for was an elevated two-seam fastball that Escobar launched 438 feet into the third deck in left field.

“It was a bit of a rollercoaster,” Ausmus said. “They wouldn’t go away. But we were able to get it done in the end.”