The Detroit Tigers’ Bruce Rondon has always believed in himself and the gift that’s been bestowed in his powerful right arm.

Minneapolis – It’s not like he’s trying to prove anything to anybody. The Detroit Tigers’ Bruce Rondon has always believed in himself and the gift that’s been bestowed in his powerful right arm.

The issue has always been consistency. Being able to harness the power, knowing when to unleash it and where to locate it. And, more importantly, gaining the same trust in the slider. The process for Rondon was never about proving he had the talent to succeed in the big leagues. It was about learning how to pitch.

Recent evidence would suggest he’s getting it.

“It’s command,” Tigers pitching coach Rich Dubee said. “It’s one thing just to have stuff. It’s another thing to be able to go back and forth. He threw a 1-0 change-up to Robbie Grossman (on Friday). It was a dandy. That’s part of pitching. No matter how hard you throw you still have to pitch backward (throwing secondary pitches in fastball counts, and vice-versa) once in a while.

“You still have to be able to command your stuff.”

Rondon has pitched two very impressive scoreless innings in the first two games of this series in Minnesota. On Friday night he struck out Miguel Sano (setting him up with a 98-mph fastball and then getting him to chase a slider out of the zone) and Grossman (another chased slider after using the change-up to get back into the count).

On Saturday night he struck out Sano again on three straight wicked sliders.

“He seems very confident in his abilities right now,” catcher Alex Avila said. “He’s throwing strikes, which is the key, and being able to command both pitches. I am happy for him.”

Since coming back from Toledo, Rondon has put up a zero in nine of 10 outings. He’s allowed three runs in 9.2 innings with 15 strikeouts.

He has a very simple explanation for his success.

“I feel a lot better,” Rondon said through Tigers interpreter Bryan Almonte. “I am healthier, so I feel good out there. I am just glad I can be out there and pitching well.” 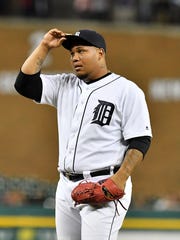 Opponents are hitting .143 against the pitch, swinging and missing 28 percent of the time.

“His slider has been really sharp,” Avila said. “Good deception on it. It looks like a fastball out of his hand. He looks much more aggressive, not only with his slider but with his fastball. He seems comfortable out there right now.”

That’s the difference right there. He looks comfortable and in control. His mound presence is one of calm assuredness.

“It’s just working on it every day,” Rondon said. “That and the fact that I am healthier now. That’s helped me be able to have better control.”

Francisco Rodriguez, the deposed Tigers closer, continues to play a huge role in Rondon’s transformation from flame-thrower to pitcher. Rondon said he still gets daily texts from him.

“He sends me messages just to make sure I understand how to get hitters out,” Rondon said. “He reminds me to be aggressive and throw strikes – just pound the zone. … He has a lot of experience in the big leagues. Who better than to get advice from than someone like Frankie?”

Rondon has had these short-sample-sized flashes throughout his career. This one has the look of sustainability.

“Friday night was the best I’ve seen him throw, as far as pitching – command and stuff,” Dubee said. “He made pitches. So we’ll see. It’s a process. It’s not one day.”