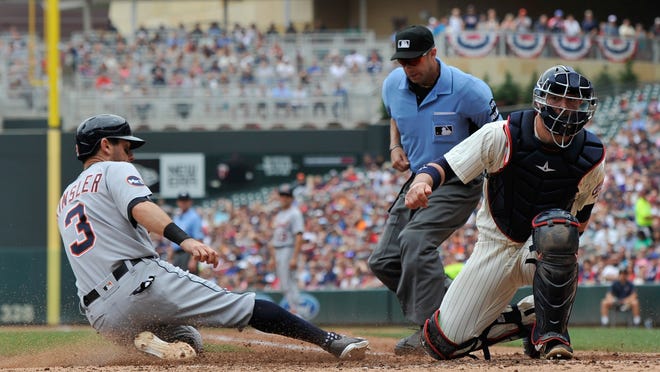 It was precisely the pivotal moment during the seventh inning in the Tigers' 9-6 win against the Twins Sunday.

The bases were loaded. Two outs. The Tigers had just taken a 4-2 lead on a 430-foot home run by Jose Iglesias in the top half of the inning.

Shane Greene, after an error by second baseman Ian Kinsler allowed one run to score, struck out the ever-dangerous Brian Dozier for the second out. On a 2-2 pitch, Dozier hit a 96-mph fastball just foul down the right field line. If fair, three runs score.

“Yeah, I wasn’t going to give them another run,” Greene said. “I was just challenging them.”

That brought up Eduardo Escobar. Earlier in the game, he hit a 442-foot home run into the third deck in left field. And here he was with a chance to alter the course of this game.

It took eight pitches to work the count full. McCann had gone out to the mound a couple of times already.

“That’s one of my favorite parts of the game,” said McCann of the cat-and-mouse game between pitcher and hitter. “You go out to the mound and change-up the signs. At one point we drew out our next two pitches and didn’t even have to put a sign down.

“We knew exactly what we were going to do. Tip of the cap to Escobar because he spoiled a lot of good pitches.”

More:Playoff run would be tough hurdle for Tigers

Only once did McCann and Greene disagree on a pitch call.

“The last time he came out, we talked about throwing a curve ball,” Greene said. “He told me it wasn’t a great idea. I told him I thought it might be.”

Greene threw his curve ball on 2-2 and had Escobar so far out front that all he could do was spin away and take the pitch. It just missed the outside corner.

That set up the mano-a-mano final five pitches.

“I think in that spot, if you are going to get beat, you have to get beat with your best pitch,” McCann said.

In other words, he was bringing heat. Greene threw four straight two-seam fastballs at the following velocity — 95, 96, 97 and 97 mph. All four were fouled off to the left side. Escobar, hitting left-handed against Greene, wasn’t getting around any of them.

“We felt we still had the upper hand, even though he threw a few of them,” McCann said. “I didn’t feel like he was getting the barrel to it well. And honestly, Greene was making his pitches. It’s not like he was just grooving it down the middle. It’s not easy to hit 96-97 mph when it's located like that.”

The 13th pitch of the at-bat was 96 mph and Escobar finally swung through one.

“I have to tip my cap to him,” Escobar told reporters. “He’s a good pitcher and he threw me his best stuff.”

Greene said he was happy that he could have Kinsler’s back after the error.

“Kinsler has played his tail off for us all year,” Greene said. “Ninety-nine out of 100 times he makes that play. I had to just keep on battling and I did that.”

It was Greene’s league-leading 48th appearance.

“Honestly, the more I pitch, the better I feel,” he said. “It’s kind of easier to stay consistent when you are getting on the mound every day.”