Move to outfield for Tigers' Castellanos getting closer

Move to outfield for Tigers' Castellanos getting closer 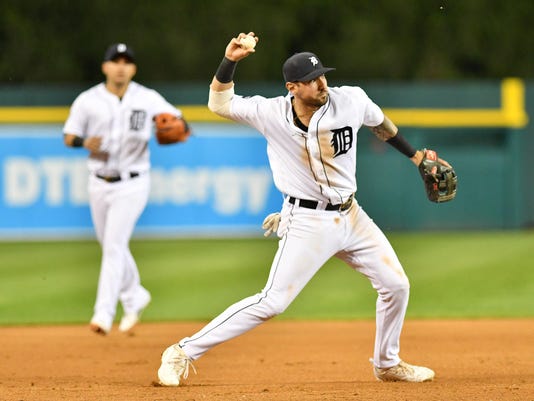 Nick Castellanos remains the Tigers’ starting third baseman, but the transition to outfield could be picking up in September.(Photo: Robin Buckson / Detroit News)

A man who still works officially as the Tigers’ regular third baseman got a pregame workout Friday at Comerica Park. Dave Clark, the Tigers’ third-base coach who also helps with outfielders, supervised Castellanos during some fly-ball drills as the Tigers warmed up for their weekend series against the Dodgers.

Tigers manager Brad Ausmus was asked if Castellanos might get a taste of right field yet this month.

“Probably not,” Ausmus said, adding September would be “more like it” as far as him beginning what could be a long-term move to a corner outfield post.

Castellanos has had something of a cruel year. He has hit the ball much better than his .246 batting average might imply. But his defense has clearly dropped a gear, and the Tigers, who are minus a right-fielder after J.D. Martinez was traded to Arizona, are thinking Castellanos could be an easy answer there.

But after Fielder was traded, Cabrera migrated back to first, and Castellanos was free to return to his more natural position, third base. It looked as if it would all work out. Until, at least, this year’s slide and to metrics that place him at the near-bottom of all big-league third basemen, defensively, conspired to spur the Tigers to make a move.

The relocation comes on the heels of the Tigers prepping a new third baseman, Jeimer Candelario, who came to Detroit via July’s trade with the Cubs and who is expected to return Sept. 1 when rosters expand.

Justin Verlander and his fiancée, Kate Upton, are joining again in an event and fundraiser designed to assist one of Verlander’s personal charities, the Wins for Warriors Foundation, with specific emphasis on commemorating the Sept 11, 2001, terrorist attacks on American targets.

It’s called the Patriot Ruck, and it will be held Sept. 9, in downtown Detroit, from Hart Plaza along the riverfront, with participants carrying weighted backpacks — rucksacks — to simulate ruck marches that are part of military training.

Under Armour is assisting in the presentation, with shirts and logos designed for the event. Those going along for the hike will have a choice of three-mile or six-mile courses. Registration fee is $35 per person or $25 for military members.

The Wins for Warriors effort has been, through the years, a steady pursuit of Verlander’s and was designed to strengthen and assist military veterans.

Verlander’s project is separate from an Aug. 22 “Workout with the Marines” production arranged by Upton.

It, too, will promote the Wins for Warriors Patriot Ruck.

Asked if he had to nudge Upton into producing the workout, Verlander, who knows a sly line when he hears one, said:

“Nah, she’s been working out pretty hard, so I think she’s excited about it,” Verlander said. “I think we’ve got some of the other wives involved, and she’s going to do a little workout and I’m probably going to try to show up and show my supports. And hopefully get the Marines to kind of step on her throat a little bit.”

RHP Michael Fulmer (10-10, 3.78), Tigers: Been a bit out of rhythm of late, but that won’t last. The Dodgers will get a taste of a pitcher who’s got a top-shelf power repertoire.