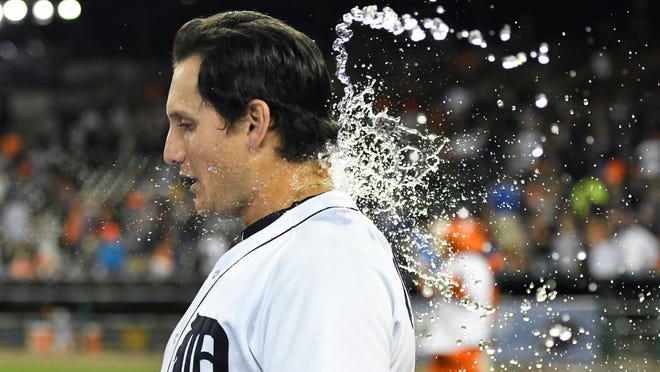 Detroit — Put it this way, it would have been an utter shock to the Tigers if there was any other conclusion.

As Tigers manager Brad Ausmus reiterated Friday, “Anybody who thinks that was intentional is out of their minds.”

Major League Baseball conducted an investigation into the incident Wednesday in Cleveland where Tigers pitcher Buck Farmer and catcher John Hicks got crossed up on a sign and Farmer’s 92-mph fastball nailed umpire Quinn Wolcott directly under the left shoulder, knocking him flat on his back.

The investigation cleared the Tigers of any intent to injure Wolcott.

“Major League Baseball takes seriously the safety of on-field personnel — players, coaches and umpires alike — and has thoroughly reviewed the incident,” said the league’s statement. “Upon conclusion of that review Chief Baseball Officer Joe Torre has concluded that no Tigers player intended for the pitch to hit umpire Wolcott and therefore no discipline will be issued.”

Torre called Ausmus after the game Wednesday and the two talked for 10 minutes.

“Joe wanted to know what happened,” Ausmus said. “He saw what happened on TV and at the time I didn’t know because I had been ejected. But I told him I would speak to the players. I did that and I called him back and we spoke of 10 minutes.

Neither Farmer nor Hicks were contacted by MLB.

Farmer, like Hicks, just wants the story to die.

“I’ve said my piece,” he said. “Me and Hicks know it wasn’t on purpose. People can believe what they want to believe.”

It happened in the third inning Wednesday. The Tigers had been beefing about Wolcott’s strike zone throughout the game and in the third inning, both catcher James McCann and Ausmus were ejected for arguing balls and strikes after Farmer walked Jay Bruce on a borderline 3-2 pitch to load the bases.

Hicks entered the game and on the second pitch, he called for a slider down and away and Farmer threw a two-seam fastball up and in. Hicks could not react quickly enough to get his glove on it.

The pitch knocked Wolcott on his back and he seemed to ask, with a smile on his face, if the Tigers had done that on purpose. He finished the game without incident.

“My question for them would be, if it was on purpose and I just got into the game, when did me and Buck plan this out?” Hicks said.

The Major League Umpire’s Association has spoken out this year against what they perceive is a growing amount of verbal abuse coming from players and managers. It has also lashed out against the league for not doing more to back the umpires up.

The Tigers have been in the crosshairs. Ian Kinsler was fined $10,000 for publicly degrading umpire Angel Hernandez, who has his own lawsuit pending against the league. The Tigers and Yankees were dealt multiple suspensions and fines for the brawl on Aug. 24.

“There’s definitely been more going on this year,” said Tigers reliever Alex Wilson, who was suspended and fined for admitting he purposely threw at Yankees Todd Frazier. “I don’t know if there is a reason behind it or what. I feel like there is one team every year that runs into trouble and this year we’ve run into every possible situation you can run into.”

Wilson said he thinks the investigation into the incident in Cleveland was more about the league doing due diligence for the safety of the umpires.

“But if you look at the situation, it’s pretty clear to me it was unintentional,” he said. “The bases were loaded and it’s the second pitch with a brand new catcher and he didn’t even take a warm-up pitch.

“I mean, knowing Buck and John, clearly there was no intent.”

More than that, Wilson said, the Tigers were trying to stop the Indians’ win streak; trying to prevent them from making history at their expense.

“It wasn’t good what happened,” Wilson said. “I know it looked terrible. But for people who understand the game and look at it, no way. We are trying to not let them beat a streak on us. That was a turning point in the game.

“It makes no sense for us to be more concerned about an umpire than handling our own business on the field.”

Wilson was asked if he felt umpires in general were more on edge this season; perhaps more testy with players than they’ve been in past years.

“Yeah, it seems like there is a lot of complaints coming from their side, for whatever reason, this year,” he said. “More than in years past. I don’t know if there is something going on behind the scenes I’m unaware of or that a lot of us are unaware of.

“But maybe they are finally being held accountable like players are. That makes sense to me. You know, you change anything and people’s feelings are going to get hurt. People just don’t like change.”