Matthew Boyd. So this was the guy who would throw the Detroit Tigers’ next no-hitter. 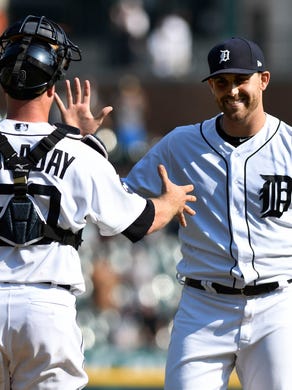 Detroit Tigers starting pitcher Matthew Boyd is congratulated by catcher Bryan Holaday (50) after the final out of a baseball game against the Chicago White Sox on Sept. 17, 2017, in Detroit. Boyd threw a one-hitter as the Tigers defeated the White Sox 12-0. Jose Juarez, AP
Fullscreen

Chicago White Sox starting pitcher Dylan Covey (68) sits in the dugout after being taken out of a baseball game in the fourth inning. Jose Juarez, AP
Fullscreen 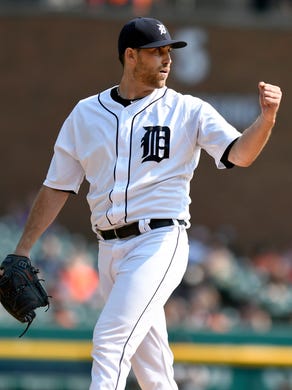 Tigers starting pitcher Matthew Boyd, center, is visited by shortstop Dixon Machado and catcher Bryan Holaday after giving up a hit to Tim Anderson of the Chicago White Sox to end his no-hit bid in the ninth inning. Duane Burleson, Getty Images
Fullscreen

So this was the guy who would throw the Tigers’ next no-hitter, the man who would hold a sunny September day’s lounge-porch of a crowd in his left hand as he made Detroit baseball history.

No. None of us had this one happening.

And it didn’t. With but one batter to go Sunday, Boyd’s dance with history was dismantled by a long fly ball from Tim Anderson that sailed past Nick Castellanos’ head for a double, the only hit Chicago managed in a 12-0 strangling at Comerica Park.

It was weird and even bizarre, watching the crowd stand in Sunday’s sultry, 80-plus degree air, cheering each pitch, clasping tense fingers, only to see Anderson ruin the party and the tumult with his last-man hit.

This kind of day was always going to be delivered by Justin Verlander. He had another no-hitter somewhere in his future. We nearly saw the Verlander three-peat any number of times, which was only right, because it’s generally a star pitcher with a star pitching ensemble that somehow keeps big-league batters from getting an official base hit over the span of nine innings and nearly three hours.

But not Matthew Boyd. Not when he showed up Sunday with a 5.75 ERA and more than a few questions from folks wondering if he ever would figure it out, this 26-year-old man who was one of the guys Dave Dombrowski wheedled from the Blue Jays when Dombrowski sent David Price to Toronto a couple of July trade deadlines ago.

More: Back shelves Cabrera again; Tigers have no plans to shut him down

It wasn’t as if what Boyd did Sunday at Comerica Park, in dominating the White Sox, was beyond any realm of possibilities.

If you saw him pitch in Florida during spring camp, Sunday’s virtuoso was part of a young man’s big-league pitching progression, his developmental arc.

I remember a conversation with the great, wizened scout and one-time Tigers general manager, Joe McDonald, outside Marchant Stadium’s offices late in March.

In one scribe’s experience, McDonald never has gotten overly impressed with young players who weren’t of substance, not only in terms of their skills, but as performers. McDonald sees deeply.

“It’s the confidence and the command,” McDonald said, and in a scout’s voice you could detect a bit of the savant as he talked that day about a young man from Bellevue, Wash.

But to say his past summer’s rotation turns suggested something as pure as Boyd nearly threw Sunday was likely – well, no. Not in many imaginations, perhaps, outside of the Boyd clan.

Then, on a football Sunday, on a lazy, languid afternoon, the final weekend of summer, a pitcher suddenly had everything rolling: fastball, curveball, change, a few sliders.

He had allowed a single baserunner, Rob Brantly, of all ironies a one-time Tigers prospect who hasn’t been much of a hitter in his career. Brantly walked. And that was the only blemish.

Until, that is, the moment Anderson’s drive began soaring higher and deeper than the Tigers were going to grab when the greater worry was that something short and blooped might be Boyd’s greater undoing.

Castellanos was playing right field in the ninth inning of a 12-0 game because he deserved to be there. His bat has been aflame, maybe not coincidentally, since he exited third base for his new station in right field.

Castellanos had a double and a home run Sunday, four RBIs, and no miscues in right, which sounds like a lot of his games since he formally was moved to right nine days ago in Toronto.

“No one catches that ball,” Brad Ausmus, the Tigers manager, said afterward.

The greater fear with the right-handed Anderson at bat would have been a blooper falling in. Castellanos was playing him in line with the Tigers’ defensive scheme. Anderson simply got a 2-0 change-up he could handle and mashed it.

“I knew he hit it hard,” said Boyd, who was as even-voiced, as seemingly unaffected by Sunday’s theater, as he appeared to be on the mound with his well-paced, metronome of a pitching approach against the Sox. “He struck it well.”

It was impossible as Sunday’s passion play wore on to not think of past afternoons or evenings that ended in similar manner to Boyd’s.

There was the 8.1-inning jewel thrown by Verlander against the Angels in August 2015. Chris Iannetta ended that with a double on the left-field chalk-line.

There was the near-miss by Walt Terrell in August 1986, when Terrell was one batter from a Tiger Stadium no-hitter, also against the Angels. Wally Joyner ruined that with a double to the right-field line.

And then, of course, there was the near-perfect game ambush of Armando Galarraga in 2010, and with Milt Wilcox against the White Sox in 1983.

Then Sunday, one more near-epic. One more batter that couldn’t quite be vanquished. One more double that left a crowd, and a baseball town, and a team and a pitcher gut-punched.

Ah, but in a kind of bemused way, with sympathy for Boyd overriding the collective sting.

What happened Sunday will be remembered in the same manner as those Verlander and Terrell moments. By everyone. Beginning with Boyd. Extending to the customers who eased into a sun-splashed Comerica seat Sunday for one more dalliance with a team and with a game, maybe a final one in 2017.

Folks, too, who didn’t have a Lions game distraction Sunday – they’re playing the Giants on Monday – probably heard of the commotion and flipped on an otherwise forgettable duel, ripe for ignoring.

They, too, will take with them a shard of Sunday’s captivating, broken history.

So, it was left to Detroit, a town that appreciates baseball and baseball artists, to say as one Sunday evening: Nice work, Mr. Boyd.

Take that memory, and that achievement, home with you tonight. Take it with you forever.