“I think the 2018 Detroit Tigers, a lot of their success is going to hinge on guys like Matt Boyd and Daniel Norris,” manager Brad Ausmus said. 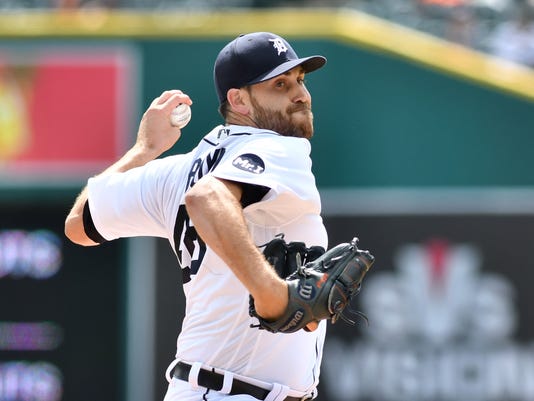 Detroit — Matthew Boyd’s complete-game, one-hit shutout of the White Sox Sunday gave the Tigers a reprieve from what has been a brutal trend the past three weeks — the starting pitcher getting rocked early.

Perhaps it offered a sliver of hope for next season, as well.

The Tigers have allowed 10 or more runs six times this month and 12 times since the July 31 trade deadline. The pitching staff has allowed more runs (372) and the highest opponent’s average (.299) since the All-Star break.

“I think the 2018 Detroit Tigers, a lot of their success is going to hinge on guys like Matt Boyd and Daniel Norris,” manager Brad Ausmus said. “Some of these young starters going forward are going to be asked to take on a bigger chunk of innings and perform at a higher rate of success in order for the team to have any success.”

Justin Verlander is gone. Anibal Sanchez’s team option for 2018 will likely not be picked up.

In terms of the 2018 starting rotation, the Tigers presently are looking at Jordan Zimmermann, who is still fighting to regain his form after neck and shoulder injuries, Michael Fulmer, who just had ulnar nerve transposition surgery and his shut down after 164.2 innings, Boyd (123.1 innings) and Norris (92), who has been working out of the bullpen this month.

“The young pitchers are going to have to step up and probably a free-agent starting pitcher will have to be acquired somewhere,” Ausmus said. “And I think next year’s season will depend on those people.”

The Tigers, in full rebuilding mode, aren’t going to spend a lot of money on a top-tier starting pitcher. They will be looking for an affordable innings-eater. Free agents-to-be who might fall into their price range could include the likes of Hector Santiago, Jason Vargas, Lance Lynn, Miguel Gonzalez and Alex Cobb.

“We are seeing what short starting pitching does,” Ausmus said. “And we’ve only been doing it for about three weeks. Having to do that for a full season would be extremely strenuous physically for the pitchers and mentally for the manager.”

Fulmer, Zimmermann, Boyd and Norris will certainly be given every opportunity to be the top four starters next season.

Ausmus said there will be discussions after the season on whether Buck Farmer and Chad Bell are better suited to be in the rotation or work out of the bullpen.

“I hope the decision is made based on how Buck Farmer can be most successful and how he can help the Tigers the most,” Ausmus said. “How can he be successful and contribute to the success of the team.”

More: Rojas out at Toledo as Tigers go 'different direction'

Bell has struggled in his three starts. He will make his fourth start Tuesday and could be replaced in the rotation by Norris, depending on how he fares.

Drew VerHagen and Warwick Saupold will likely remain bullpen arms going forward. Artie Lewicki and Myles Jaye will likely be in the mix to compete for the fifth rotation spot in spring training.

Hitting coach Lloyd McClendon poked his head into Ausmus’ a little before 4 p.m. Monday and said Miguel Cabrera would be available to DH.

Cabrera was held out of the lineup Sunday with lower back stiffness.

Ausmus was asked if Cabrera had an MRI or any other tests done.

“Not recently,” Ausmus said. “And I don’t know if he’s had any at all. General back pain is what he’s been diagnosed with. But that doesn’t mean he won’t get one after the season is out.”

You might think that Mikie Mahtook might be feeling a little beat up at this point in the season.

After all, before Monday, he’s played in 104 games, 39 more than any of his previous two big-league seasons. He’s made 83 starts, seven more than he had in the last two seasons combined. And he’s had 363 plate appearances, 167 more than he’d ever had in the big leagues.

“I’m feeling fine, except for this groin thing (which forced him out of the lineup for five games last week),” Mahtook said. “I came up in the minor leagues playing 140 games a year so I am used to this. I’ve never been one to sit out any games in the minor leagues.”

“I think I’ve figured out what I need to do to keep my body feeling good,” he said. “A lot of it is a mental thing. You just train yourself to push through. Everybody has days when they aren’t feeling good, but you just know you have a game to play and you push through it and do what you can.”

Still no official word when the Tigers might allow super utility man Andrew Romine to play all nine positions in a game.

It won’t happen against the Twins this weekend because they are in the playoff race.

“If it doesn’t happen in the next two days, it doesn’t mean it won’t happen,” Ausmus said. “You don’t want it to turn into some kind of sideshow. You are still playing to win the games.”

It’s the longest active streak in the Major Leagues and tied with James McCann for the longest hitting streak by a Tiger this year.

...Zimmermann threw a full bullpen before the game Monday. Barring any complications he could get the start on Thursday against the Twins.