Tigers’ Cabrera diagnosed with herniated disks in back 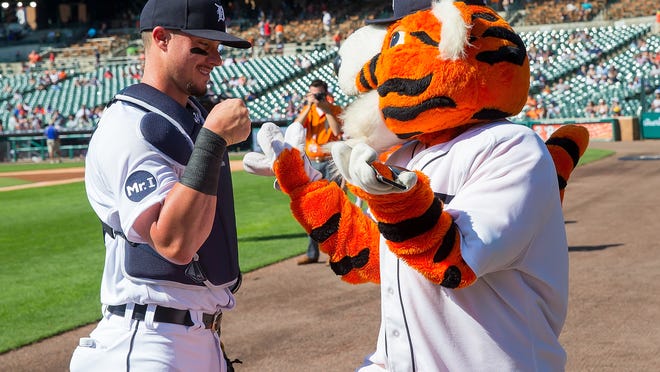 Detroit — The MRI results on Miguel Cabrera’s damaged lower back revealed herniation in two disks, manager Brad Ausmus announced after the Tigers’ 10-4 loss to the Minnesota Twins on Sunday.

“The treatment is to be determined,” Ausmus said.

It remains to be seen whether Cabrera will play again this season.

“It doesn’t necessarily mean (he will be shut down),” Ausmus said. “It depends on what the treatment is. He expressed to me that he wanted to go on the road (to Kansas City and Minnesota).

“We’re not ruling out the possibility he can play again this season. But I am sure it would be in a designated-hitter role.”

Cabrera has battled lower back stiffness and soreness all season, since back in March when it flared up during the World Baseball Classic. Throughout the season he’s taken anti-inflammatory medication, chiropractic manipulation and daily physical therapy.

Among the treatment options, Ausmus said, could be some type of injection, as well as the manipulation therapy. Surgery, he said, has not been discussed.

“I won’t say it’s not (an option), but I don’t believe it is based on what I’ve been told,” Ausmus said.

The herniation, or bulging, was discovered in the L3-L4 and L4-L5 spinal disks. Ausmus dealt with the same issue, in the same spot, throughout his 18-year playing career.

“This is something that’s been slowly developing for years,” Ausmus said. “What happens is, your disks lose water as you get older. They tend to dry out over time and gravity pinches down and the discs push out from the vertebra.

“As they push out, they touch the nerves and that’s when you feel the irritation.”

Injuries pile up for ‘limping’ Tigers

Ausmus said the pain manifests differently in different people. Cabrera has expressed that he’s felt weakening in his legs, as well as the tightness in his back and hips.

“Miggy throughout his career has played through pain the majority of players would not play through,” Ausmus said. “He wants to play every day and he often will downplay the severity of his pain.”

Cabrera told Ausmus earlier in the week that he planned to do more core-strengthening exercises in the offseason to help alleviate the issue.

“There are core exercises designed to work the muscles along the vertebra that help stabilize the vertebra so they don’t put as much pressure on the disks,” Ausmus said.

No telling where outfielder Alex Presley will end up next year, but he would love to have another year playing at Comerica Park and against Central Division pitching.

He got two more hits Sunday and is hitting .371 in 37 games against the Central Division. Presley finished hitting .303 with five doubles, a triple and both his home runs at Comerica. He’s hitting .317 for the season.

… Twins manager Paul Molitor messed up the chance to witness the first-ever Presley vs. Pressly matchup Sunday. With two outs and the Twins up 10-2 in the seventh inning, Alex Presley was due up to face Twins reliever Ryan Pressly. Presley has been in the league since 2011, Pressly since 2013, and they’d never faced each other. But Molitor spoiled the fun by bringing in lefty Taylor Rogers.

… Buck Farmer got one earned run knocked off his record after the game. Initially, a pop-fly behind second base, which was dropped by Dixon Machado, was ruled a hit and an RBI. Later, it was correctly changed to an error and an unearned run.