Catcher-first baseman Jarrod Saltalamacchia, who hit 12 home runs and knocked in 38 runs as the Detroit Tigers’ backup catcher in 2016, agreed to come back to the club on a minor-league contract. 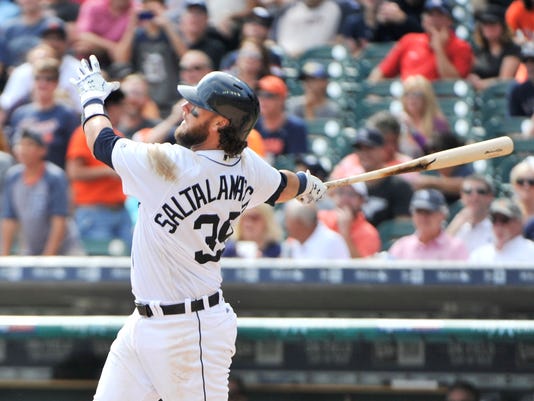 Jarrod Saltalamacchia is pictured with the Tigers in 2016.(Photo: Robin Buckson, Detroit News)

Catcher-first baseman Jarrod Saltalamacchia, who hit 12 home runs and knocked in 38 runs as the Detroit Tigers’ backup catcher in 2016, agreed to come back to the club on a minor-league contract and an invitation to the rest of big-league camp Friday.

“I was pushing all winter to find a team and didn’t have anything treading,” he said. “David Chadd (Tigers assistant general manager) called me and asked me how I was doing. He told me the role they had in mind and I said I was ready. There was no more talking beyond that.”

Saltalamacchia, a switch-hitter who will be 33 in May, is expected to start the season at Triple-A Toledo.

“Just kind of an insurance,” he said. “I’ll go to Toledo, get some playing time and stay ready in case something happens. It’s just basically an opportunity, which is all I ever asked for.”

It will probably force some roster decisions at the catcher position for the Tigers. Veterans Derek Norris and Brayan Pena were signed to the same type of deal this offseason, with the same idea – to start in Toledo, work with the young pitching staff and be ready in case of an injury to either starter James McCann or backup John Hicks.

Pena has said he was transitioning to more of a coaching-mentor role, so perhaps the signing of Saltalamacchia will expedite that.

Rookie Grayson Greiner was also supposed to start at Triple-A Toledo. This signing could conceivably push him back to Double-A.

“When you have veterans like that, it doesn’t matter what level they are at,” manager Ron Gardenhire said. “If you need a veteran catcher and you have them in your system, you know you can bring them up from Double-A or wherever.

“The focus is going to be on our top prospect catchers and those (veterans) are there to back them up. And if you have somebody go down, rather than messing with those kids, you leave them alone and you bring up guys like that.”

Saltalamacchia spent the last few weeks working out at the MLB Players Association workout facility in Bradenton, waiting for a call. Any call. And he admits he was starting to wonder if one would ever come.

“It’s always in the back of your mind,” Saltalamacchia said. “I talked to my wife about it (possibly retiring) and she made it clear it was not her decision, it’s my decision. And I could appreciate that.

“It was in my head, but we were going to give it every shot. If it wasn’t here in the big leagues, then maybe in the minor leagues somewhere. If that didn’t work, we were going to try overseas in Japan.”

If that didn’t work, he was wrestling with the idea of playing Independent League ball.

“I wasn’t sure about that, but to be honest with you, I probably would have done it,” he said. “Just to give myself every opportunity and chance. If nothing happened there, then it’d be, ‘OK, it’s time to move on.’”

He had a miserable year in 2017, on and off the field. Signed by the Blue Jays in February, he wound up getting one hit in 25 at-bats with 16 strikeouts. He was released, brought back and released again on June 30.

“To be honest, my mind wasn’t there,” he said. “I had stuff going on at home and I felt I really needed to be home, and I couldn’t be. There was some outside stuff that affected me for the first time in my career.”

His wife Ashley was ill and he needed to be there with her, to help take care of their four daughters. He went home for four months while Ashley convalesced. He also spent three weeks working as the color analyst for NESN, filling in for Jerry Remy on Red Sox games.

“I enjoyed it,” he said. “I don’t know if it’s something I’d want to do for the rest of my career, but you never know. It was fun. I was glad to be back in the game and talking about baseball.”

But it reinforced his sense that he wasn’t done playing. He played for five weeks in the Mexican Winter League, got back with his old hitting coach and is starting to feel better about his offensive game.

“Mentally, I am back to where I need to be,” he said. “I am really excited. It feels like I got called up to the big leagues again, and it’s only spring training. I am just glad to be out here playing and competing again.”

Right-handers Artie Lewicki and Zac Reininger, who both made their Major-League debuts last season in Detroit, were optioned to Triple-A Toledo.

And left-hander Gregory Soto was optioned to High-A Lakeland.

The camp roster stands at 53, including 23 pitchers.