Wizard of Boz: Bosio teaches Tigers ‘the other side of the teeter-totter’

Wizard of Boz: Bosio teaches Tigers ‘the other side of the teeter-totter’ 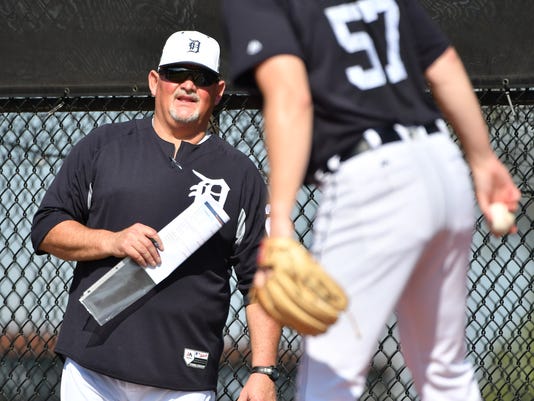 You’d think that would be a rather small, overly fundamental thing to be obsessing about to a veteran big-league pitcher. But guess what?

“I started to throw my slider hard, sharp and exactly where I wanted it to go,” said Hardy, who considers the slider his third-best pitch. “My curve ball was just as sharp.”

Little details, minor adjustments, big impact. That’s been the Bosio effect with a lot of the Tigers pitchers this spring.

“He’s different from any pitching coach I’ve had in professional baseball,” Hardy said. “But everything he says seems to work.”

Bosio watched Jordan Zimmermann experiment with a two-seam fastball during a bullpen session last week. Zimmermann has never much used a two-seamer over his career. But Bosio was intrigued. So he changed Zimmermann’s grip slightly and lo and behold, he has another very usable weapon in his arsenal.

“I’ve done everything he’s said, taken every suggestion,” Zimmermann said.  “It all seems to help.”

His methods are, to say the least, unorthodox.

He had starting pitcher Daniel Norris pitch the final inning of a game, so he could get the feel, the accelerated heartbeat that a closer might feel.

“He said he just wanted me to go out and compete, and have that closer mentality and let it eat instead of trying to finesse everything,” Norris said. “He said, ‘I’ve watched you pitch and you are at your best when you have that brim-down, attack attitude.’”

It was exactly opposite of the advice Norris had been given in previous years.

“For me, I was like, ‘All right. Say no more,’” he said. “A lot of times in my career they tried to tell me not to be like that. That I was too intense and I needed to back off and breathe and relax.

“He teaches that upbeat pace and that plays into my game pretty well.”

Instead of having Norris think of a start as one seven- or eight-inning event, Bosio has Norris approaching it as seven or eight one-inning battles.

“It’s just right here, right now, do or die, every inning,” Norris said. “I like that thought process a lot.”

The art of deception

Bosio has stressed an accelerated pace. He has put pitchers through a drill called Six in Sixty where he has them try to throw and command six pitches in 60 seconds. And he also has drills where he’ll ask the pitchers to decelerate and slow the pace.

He wants it varied. 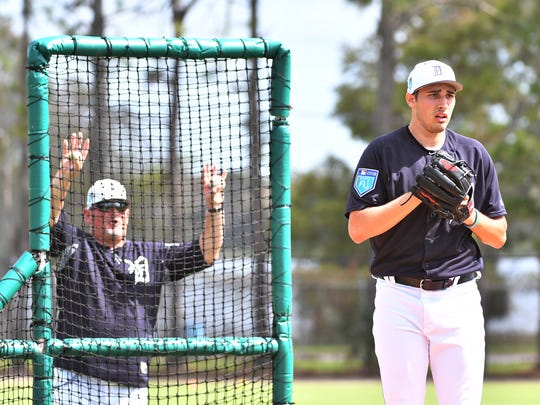 “We also will slow-play it, where they wind-up and hesitate, then go through the regular delivery. Maybe do a half-second or full-second hold at the top of the delivery. It helps with timing, so the pitcher’s hand-break is the same all the time.”

“Usually the ball will dictate the adjustment.”

The Six in Sixty drill also helps pitchers stop over-thinking their mechanics. Closer Shane Greene credited the drill with improving his command on his slider.

“It allowed me to focus on throwing it where I’m trying to throw it, not so much how I am throwing it,” Greene said. “It helped me a lot.”

Bosio has had pitchers warm up, then sit down for an inning, warm up again and then finally come into the game after a few up-and-downs – simulating what relievers will go through in the season.

Pitch counts in games are only part of what constitute a pitcher’s daily work load. Bosio counts total throws – from flat-ground tosses, to pre-game bullpens and warm-up pitches.

He’s changed sight lines; instead of always focusing on the catcher’s glove as the target, he tells them to train their sights on the catcher’s shoulder, or face mask or shin guard, whatever the situation and pitch dictates.

In a start earlier this spring, Matthew Boyd was struggling to get his change-up down. Between innings, Bosio suggested Boyd raise his sight line. Somehow that slight adjustment helped him get his arm all the way through the pitch, enabling him to work it down in the zone.

“He’s always got something for me,” Boyd said. “It’s different and it’s productive. It’s helpful.”

Catchers ‘are our leaders’

Bosio enlists the catchers as his field generals.

“They are our horses, they are our leaders,” Bosio said. “You cannot win without great catchers. They are the guys I rely on.”

All the keys that Bosio has on the pitchers, all the little tricks he uses to make mechanical tweaks on the fly, he imparts on the catchers. So in the game, when Michael Fulmer is yanking his two-seamer, catcher James McCann knows exactly what to do or say to get him back on track.

“It makes it easier,” McCann said. “OK, if this guy is struggling in this way, this is what we’re going to do to get him back. This guy is trying to do this, so I need to sit here. We are on the same page.

There was a strong crosswind blowing in Fulmer’s first spring start in Sarasota last month. It was messing with his ability to command his sinker. Bosio’s lessons in altering sightlines paid off on that day.

“In that wind his sinker took off even more,” McCann said. “When we wanted the pitch to go to his glove side (in on a left-handed hitter), instead of setting up on the corner, I am setting up on the chalk to give him that extra sign that – hey, I’ve got to start it out there so I can get it back to the plate.

“If I set up on the corner, it’s going right over the plate.”

Changing sightlines, McCann said, is more of a mind trick for pitchers.

“It’s really about focus point. Instead of, like on a slider, gripping it and ripping it, I am going to throw it to this spot and if we miss, then this is where we want to miss. I’ve got this sight and if I don’t hit it there, then what did we do wrong and how do I need to change the sight.”

Bosio talks a lot about creating and distorting illusions for hitters.

“We want to make a pitch look like another pitch out of the hand of the pitcher,” he said. “Catchers have the ability to do that. There are things they can do to help the pitcher with sightlines, to bring along other pitches.

“But we need to make all of our pitches sellable to get the hitter to address that. That’s when you get the swings and misses and soft contact.”

If a pitcher can’t command his slider, the hitter won’t honor it. So if you are throwing the slider and change-up out of the same arm slot, like Boyd does, there can be no deception if the batter can just ignore the slider.

“We are going to have a surprise element to us. We’re going to go against the curve. We practice the other side of the teeter-totter so that we are not so predictable.”

It’s been fascinating to watch throughout the spring as Bosio has turned bullpen sessions into laboratories.

“Just a lot more attention to detail,” McCann said. “You see guys starting to take off. You can see guys, even a guy like Fulmer – he’s got great numbers, obviously, been successful. But he can get better. It’s crazy to say that. People don’t think about guys who are established, guys like Miggy, getting better. But they can.

“There is always something to do to make a player better and that’s what Boz is looking for.”