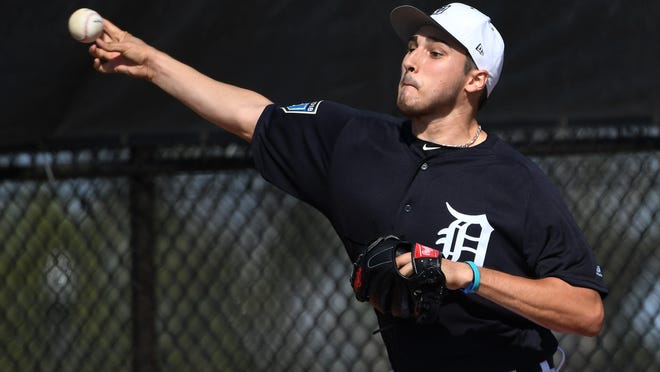 Grayson Greiner, C: The man who lives by streaks — weeks, months, seasons — is on another at the outset of his first Triple A season. Greiner’s batting .419 in his last 10 games. He’s bidding to become one of those rare tall-timber catchers (6-foot-6, 220 pounds) who makes it to the big leagues. Greiner, 25, is a right-hand batter and was a third-round pick in 2014 out of the University of South Carolina.

Victor Alcantara, RH reliever: He’s 3-0 for the Mud Hens, with a 2.70 ERA and 1.13 WHIP spanning seven games. Alcantara, 25, was the Tigers’ thank-you from the Angels when Detroit dealt Cameron Maybin in Nov. 2016.

Louis Coleman, RH reliever: He’s no pink-cheeked prospect. Coleman is 32 and has 213 games of big-league experience. The Tigers signed him to a minor-league deal and he has thrown niftily since spring camp, particularly this month at Toledo, where he has a 1.93 ERA in eight games and 9.1 innings. Coleman has struck out 11, walked three, and allowed four hits. He was a fifth-round draft pick by the Royals out of Louisiana State.

Mikie Mahtook, OF: Strange spring for Mahtook, who typically is a slow-starter. His slow-poke bat has followed him from Detroit to Toledo, where he’s batting .204.

Tyler Alexander, LH starter: Alexander has been one of those steady souls delighting Erie manager Andrew Graham, thanks to a 2-0 record, a 2.91 ERA in four starts, and a 1.11 WHIP. Alexander has struck out 18 and walked only three in 21.2 innings. He was a second-round pick in 2015 from Texas Christian.

John Schreiber, RH reliever: He had the audacity to allow his first earned run since last midseason when Trenton scored against him, once, in a game April 18. Otherwise, he has all the earmarks of a prospect headed for Detroit. Schreiber, 24, is a Rockwood native and product of Northwestern Ohio University who in eight games this month, spanning 9.2 innings, has struck out nine, while walking two batters — intentionally. He has allowed 10 hits. His ERA is 2.79, his WHIP is 1.24, and opponents are batting .250 against him. He’s 6-3, 215.

Troy Montgomery, OF: Cold month for this Ohio State alum whom the Tigers got as part of last autumn’s deal that sent Ian Kinsler to the Angels. Montgomery’s batting .229 in his last 11 games.

Daz Cameron, OF: Warming up of late, batting .317 in his last 10 games. Cameron, of course, was one of the blue-chippers the Tigers got from the Astros last August in the Justin Verlander blockbuster.

Alex Faedo, RH starter: He is probably under-matched at high Single A. But keep in mind Faedo is only 10 months out of college and was given the summer to rest after last season’s virtuoso at the University of Florida. In five starts for the Flying Tigers, Faedo, who was the Tigers’ top pick in last June’s draft, has a 2.48 ERA and a 0.76 WHIP.

The Flying Tigers get good-behavior citations for their past week of generally satisfactory labor.

Reynaldo Rivera, 1B: He’s hammering the ball after a lower-back strain, and in the aftermath of a tough first professional summer at Single-A Connecticut. The Tigers bet big on Rivera last June, grabbing him in the second round, and might be seeing signs of the slugger they envisioned. Rivera, 20, had a home run and three doubles in his first three games, and was batting .364, with a 1.371 OPS. He is 6-6, 250 pounds, and a native of Toa Alta, Puerto Rico. He was signed out of Florida’s Chipola Junior College.

Ignacio Valdez, OF: He’s having a harsh month, batting .169 in 17 games. Perhaps the weather warms up, perhaps it doesn’t until July. Valdez can only hope he does, in any event. He is 22, is 6-3, 195, and was signed out of Peravia, Dominican Republic.