JaCoby Jones blistered a leadoff triple to left-center in the 12th, then scored on a safety-squeeze bunt from John Hicks.

John Hicks of the Detroit Tigers celebrates his game winning RBI bunt in the 12th inning to beat the Tampa Bay Rays with Leonys Martin, left, at Comerica Park in Detroit on May 2, 2018. Gregory Shamus, Getty Images
Fullscreen 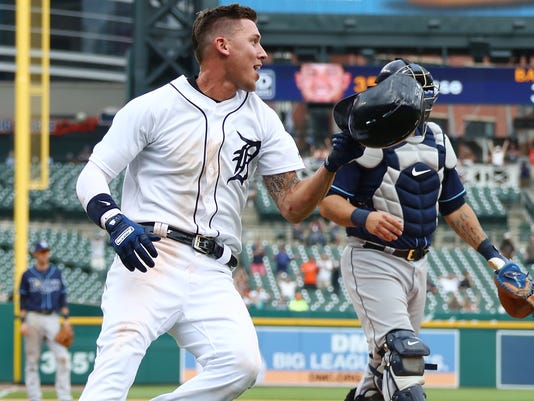 Detroit —  Sometimes you wonder if that’s, in fact, a Tigers uniform JaCoby Jones is wearing.

He is jet-engine fast. His defensive range in the outfield might as well be measured in square miles. He makes moves on the bases that remind you of a Formula 1 driver’s dares.

He must play for a visiting team. This isn’t Detroit baseball.

Jones slashed a leadoff triple to left-center leading off the Tigers’ half of the 12th, then scored on another bit of derring-do, a bunt John Hicks decided on his own to steer toward first base, as the Tigers beat the Rays, 3-2, all while a Wednesday afternoon Comerica Park crowd of 20,866 took in an event that was part-baseball game, part-carnival act by Jones.

Hicks’ bunt was self-deployed. And it was a jewel that wiggled between the mound and first base on the first pitch from Rays reliever Matt Andriese. The Rays never had a chance to make a play as Jones sprinted home.

“I can’t tell you really what I said,” Tigers manager Ron Gardenhire admitted afterward, acknowledging that with a man on third base and none out, he expected a hitter known more for power than small ball to blast a sacrifice fly or hit something hard. “But we won the game.”

Gardenhire gave Hicks all the credit for thinking and acting. The Rays had a defensive shift aimed toward the infield’s left side. First baseman Brad Miller was back, even with the bag.

“Honestly, I looked and thought it was the perfect time,” said Hicks, who, coincidentally, also played first base Wednesday, for the Tigers, as Miguel Cabrera sat out another day with a sore biceps. “The only guy who could make the play was the first baseman.

“It’s a very good percentage play, especially if you get it away from the pitcher.”

Jones, who can run zero to 60 about as fast as any player in recent Tigers times, had no idea Hicks’ bunt was coming. But he adjusted and sped home.

“When I saw the bunt down,” Jones said, “it surprised the crap out of me.”

Not surprising, given that Hicks had only one previous career bunt — a nifty suicide-squeeze during his rookie year with the Mariners.

Gardenhire loved all of it Wednesday on a May afternoon that was pure baseball weather: 76 degrees at game time.

The skipper has been preaching since spring camp for his team to be adventuresome, in sane ways, on the bases. And at-bat.

“We want them thinking along with the game,” Gardenhire said, referring not only to Hicks’ creativity but to a play that hadn’t worked so well for Jones in the seventh.

Jones had just ripped a single to left-center, a rare hit against Rays starter Blake Snell, in a game the Rays then led, 2-0.

Hicks was the next batter and drove a fly to medium-depth center field. Jones, the one-time prep football speedster, decided a spin of the roulette wheel was in order with Snell gunning toward a shutout.

He tagged and broke for second. But center-fielder Mallex Smith pegged a lovely relay to nab Jones.

It was a play that stung doubly when James McCann followed with a 414-foot blast into the left-field seats to make it 2-1.

Gardenhire, though, figured to have no issues with Jones’ ploy — and he didn’t.

“They’ve got to make a great play to get him,” Gardenhire said. “I told you guys all along, we’re trying to win games, we’re going to be aggressive, and that comes with effort.”

All the high-wire acts took nothing away from Wednesday’s co-stars: Tigers pitchers.

Michael Fulmer had a tough time early taming his four-seam fastball, allowing a run in the first and second. But he scrambled his way through six innings of typical Fulmer power-pitching, allowing six hits, all singles, while striking out five and walking two batters, both in the first.

Fulmer’s fastball was its usual 95-97, paired with his familiar slider, and blended nicely with a change-up that early on he was throwing for strikes more often than his four-seamer.

He had 49 pitches through the second but bored through six innings and 109.

“I thought he deserved it,” said Gardenhire, who was at a pitch-ceiling with his starter but wanted Fulmer to have the satisfaction of six innings. “He had to grind it out, and that’s exactly what he did.”

“I told Mac (McCann) early, I’m gonna get through six,” Fulmer said. “And I credit that to defense.”

Hicks got the first blue ribbon for a snappy double-play he crafted in the first with the bases loaded. Joey Wendle slapped a hard grounder to Hicks, who stepped on the bag at first for the force-out before gunning a throw to McCann that nailed C.J. Cron at the plate.

The Tigers had nine hits, three from Jones, including a pair of singles as he saw his average rise to .280. McCann had two hits, as did Hicks.

“We do get after it pretty good,” said Gardenhire, referring not only to his team’s late-inning style but to a personality that again Wednesday showed some baseball-playing verve.