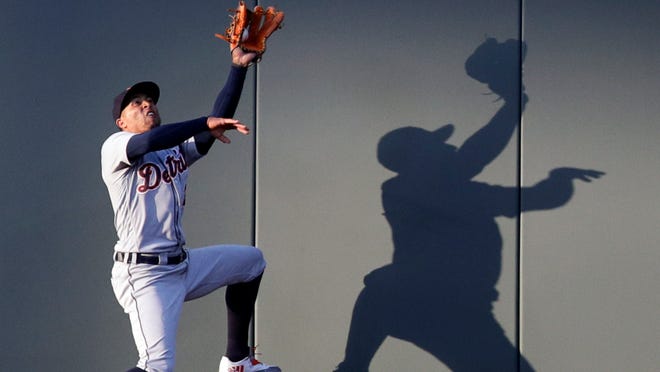 Kansas City, Mo. — This should be about a brilliant pitching performance by an old master and mature, dynamic at-bat by a young player still trying to cut his teeth in the big leagues.

Instead, it was just another bullpen implosion and another Tigers loss.

“It’s disappointing and bothersome because we had good performances,” Tigers manager Ron Gardenhire said after the 4-2 loss to the Royals on Friday night. “It was a good pitching matchup. Both guys were doing their thing. But when you score (late) like that, that shutdown inning has to come next. We brought in our guys. It just didn’t work out.”

After being blanked for seven innings by Francisco Liriano, and trailing 2-0 after a clutch, two-run double by JaCoby Jones, the Royals scored four times in the bottom of the eighth.

Liriano was at 88 pitches when he came back out for the eighth, but he didn’t look like the same pitcher.

“With Frankie going out there, we saw him start warming up and we were like, ‘Come on Frankie.’" Gardenhire said. "Then that first hitter, we could tell that long inning might’ve got to him. It looked like he might’ve gotten a little stiff.”

Left-handers had gotten three hits in 20 plate appearances off Stumpf this season.

“We felt comfortable going to him there,” Gardenhire said. “Three lefties in a row, brought in Stumpf and he’d been really good at it. Just didn’t work out.”

Stumpf managed to retire only one of the three. Jon Jay singled and with one out, Alex Gordon hit a hard smash directly at and past second baseman Dixon Machado. That loaded the bases and ended Stumpf’s night.

“He had Jay 0-2 and in that situation, you got to get that ball toward the ground,” Gardenhire said. “Jay had to reach out and flip it, but it was definitely too much of the plate. He will tell you that.”

“I came in the game and threw a lot of strikes. And they get a slap hit there, pop fly and then another ball that finds a hole. Just couldn't find it out there, and that happens sometimes. It just didn't go in our favor.”

Right-hander Joe Jimenez came on and his first pitch to Alcides Escobar went to the backstop, allowing one run in. After walking Escobar intentionally, Whit Merrifield hit a sacrifice fly to tie the game and Jorge Soler rapped a two-run single — ballgame.

“We couldn’t stop them and we ended up losing a ballgame that should’ve been ours,” Gardenhire said.

Jones’ at-bat in the top of the eighth, though, was a redemption shot. He had twice stranded two runners in an inning, including an awful three-pitch strikeout with a runner on third and one out in the sixth inning.

“That previous at-bat, with a runner at third, I took two fastballs I shouldn’t have taken,” Jones said. “I should have at least swung at them, make an effort. But I didn’t. When I came back up (in the eighth), I just wanted to flush that last one and come back positive for the next one.”

Better yet, the inning-ending double plays kept his pitch-count down. He needed just seven pitches to get through the third and fourth, and nine to finish the fifth. He was at 88 pitches through seven.

The double-play in the fifth was finalized by video review. Lucas Duda hit a ground ball up the middle. Shortstop Jose Iglesias, playing behind second base, beat lead runner Jon Jay to the base and threw to first. Duda was initially called safe.

After Jeimer Candelario doubled and the Royals walked Victor Martinez (who had three hits) intentionally, Jones stepped in against reliever Blaine Boyer. With the count 2-2, he fouled off a 94-mph fastball, and laid off a tantalizing slider.

“I knew he throws a lot of cutters and sliders,” Jones said. “I faced him in Detroit and that’s what he threw. I knew he wasn’t going to pump a heater on that 3-2 pitch. I just stayed back, trusted my hands. He threw me a slider across the plate and I put a good swing on it.”

Jones jumped on the 3-2 slider and sent a screamer into the left field corner — a two-run double.

The joy from that, though, was short-lived.

About Liriano, though: He gave up three singles — one in the third inning, one in the fourth and one in the fifth. Each time, those runners were erased in a double-play by the next batter. So despite allowing those hits and a walk, he faced just one batter over the minimum through seven innings.

Better yet, the inning-ending double plays kept his pitch-count down. He needed just seven pitches to get through the third and fourth, and nine to finish the fifth. He was at 88 pitches through seven.

The double-play in the fifth was finalized by video review. Lucas Duda hit a ground ball up the middle. Shortstop Jose Iglesias, playing behind second base, beat lead runner Jon Jay to the base and threw to first. Duda was initially called safe.

But Gardenhire challenged. There were two points to the play that were reviewed: Jay’s slide into second base and the safe call at first. Both runners were ruled out. The video review officials in New York ruled Jay’s slide was illegal, and the call at first was wrong, and overturned. It went into the books as a 6-6-3 double play.

It was yet another remarkable outing for the veteran Liriano. He’s allowed three runs or less in all six of his starts. It was the third time he’s stifled the Royals (five runs allowed in 19 innings).

On Friday, through seven innings, he’d thrown 32 sliders, inducing seven swings and misses and six called strikes. He threw 30 two-seam fastballs and got 10 called strikes with that. The average exit velocity on balls put in play by the Royals was just 82.6 mph.

“We lost the game,” Liriano said. “I try to take the positives from it, but we scored two runs. I need to go out and attack instead of trying to be too fine and end up walking a guy.”

He admitted the long top of the eighth caused him to get out of whack.

“A little bit,” he said. “I was sitting there for a long time. But I need to execute my pitches right there and attack the hitter. We score, the first thing you have to do is get the first guy out. I couldn’t do that.”