The teams will play a traditional twinbill with the first game starting at 4:10. 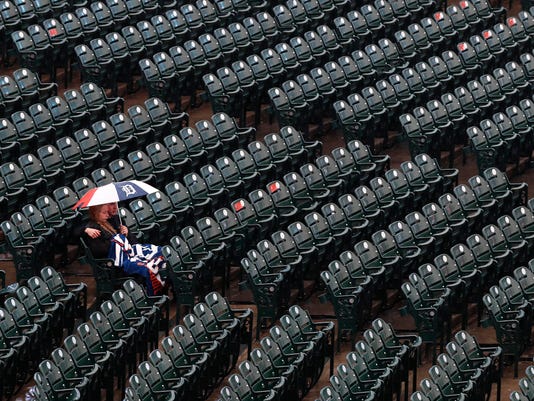 Tigers fans sit in the stands under an umbrella in the rain at Comerica Park. The game between Detroit and Seattle was postponed and will be made up as part of a doubleheader Saturday with the first game starting at 4:10 p.m.(Photo: Paul Sancya, Associated Press)

Detroit — For the eighth time already this season, the Tigers had a baseball game postponed.

For the fourth time this season, they will play a make-up doubleheader.

Rain postponed the scheduled game with the Mariners Friday night. The two teams will play a straight doubleheader Saturday beginning at 4:10 p.m. The second game will start approximately 30 minutes after the first game ends.

The pitching match-ups aren’t expected to change. The Tigers will go with left-hander Matthew Boyd in the opener, opposed by Mariners right-hander Marco Gonzalez.

Fans who have a paid ticket for Saturday can use it for both games. Fans with paid tickets for the postponed game Friday can exchange their unused tickets at any time for any similar or lesser-priced regular season game in the next 12 months — though not Opening Day 2019.

The Tigers optioned right-handed reliever Johnny Barbato back to Triple-A Toledo. He had pitched in three games and allowed three runs in 3⅔ innings. The Tigers will likely call up two players from Toledo on Saturday — one to replace Barbato and another to fill a 26th roster spot which the league allows for make-up doubleheaders.