Read an excerpt from his new book, 'Joy in Tigertown,' in which the World Series hero works for the pizza king 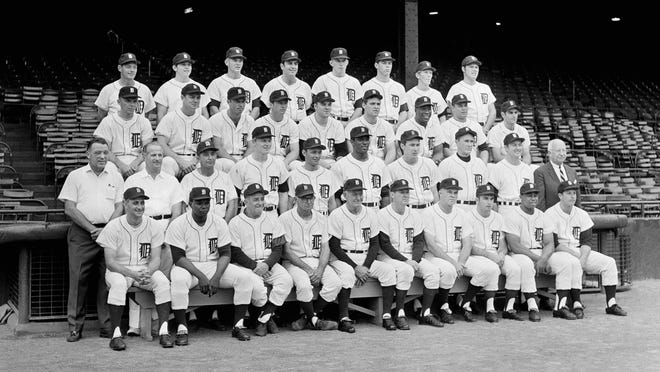 Mickey Lolich pitched for 16 years in the major leagues, the first 13 with the Detroit Tigers.  When he retired, he had the most strikeouts of any left-hander in any league. He pitched a jaw-dropping 300 innings four seasons in a row. And for a glorious week in October 1968, he pitched three complete games in the World Series, won them all, and powered the Tigers to their first championship since 1945.

Now 77, Lolich has written a book with former Detroit News Tigers beat writer Tom Gage, "Joy in Tigertown: A Determined Team, a Resilient City, and our Magical Run to the 1968 World Series." In it, he covers the 1968 season in detail, and includes stories about his life outside the ballpark, before and after the 1968 season.

For 10 days, Sgt. Lolich guarded a radio tower in Detroit or drove the major who was in charge of the troops downtown, then spent another week on call. Then he went back to pitching for the Tigers.

The book includes anecdotes and commentary on topics such as:

Lolich also spent a time in the employ of Mike Ilitch, who was not then the owner of the Detroit Tigers but was looking for help in promoting his pizza business. As Lolich recounts in the following excerpt from "Joy in Tigertown," things didn't go exactly as planned.

I’ve known two owners of the Tigers — John Fetzer, for whom I played, and Mike Ilitch, for whom I once worked. Ilitch and I weren’t close. But there was a time I thought we were going to be.

In 1968 we didn’t know each other at all. But when the Tigers became the talk of the town — and especially when it looked like we were going to win the American League pennant and maybe more — it didn’t take long to hear from him. Little Caesars pizza was in its infancy back then, getting off the ground as it began to build its Hot-N-Ready empire. It wasn’t until more than 20 years later that Ilitch bought the Tigers, but on our way to winning it all, I found out how big a fan he was.

Mike was as excited as anyone about our success. That’s because he had been a player in the Tigers’ organization. He knew his baseball. He definitely did and he was a Detroiter through and through. So, of course, he was thrilled when we won. The whole city was. But he also knew — as did his wife Marian — that it would be good for business to be closely associated with a winning team and to have a Tigers player as a company spokesman. So about a month before the World Series, Little Caesars contacted me about signing autographs at stores that would soon open in nearby Flint and Utica, Michigan. I agreed to sign, but the season was still going on, so we let it go until later. There was a lot of baseball still to play before I could make those appearances.

I did not forget what I had agreed to do, however. Well, the World Series ended on a Thursday, and I was supposed to make those two appearances on a Saturday two days later. But as soon as we won, I heard there was a big discussion at Little Caesars about whether I would honor my commitment. Ilitch was part of those discussions, and I heard he stood up at the meeting to say, “Look, I don’t know Mickey personally, but he seems to be a trustworthy guy. So I’ll bet everyone at this meeting $1,000 he’ll be ready to go when the time comes.”

I guess the response to that was, “C’mon, Mike, Mickey won’t be there. He might not even be in town. He’ll probably be elsewhere celebrating.”

Without even knowing me, Ilitch had defended me. That really impressed me when I heard it. “No, he’ll be there,” he had said on my behalf. “He’s going to live up to the agreement.” To be certain I would, however, Ilitch drove over to my house on that Saturday morning, came right up to the front door, knocked, and said, “Hello, I’m Mike Ilitch from Little Caesars.”

I replied, “Okay, let me get my coat” and got in the car. He drove me up to Flint, where we were mobbed by tons of fans. But because of how big the crowd was, we were late leaving for Utica. Two things happened on our way there.

As he drove, we talked, and as we talked, we reached a business agreement. Ilitch hired me to represent Little Caesars at all his new store openings. But because I could write my own ticket on a lot of stuff at that point as the World Series MVP, I told him I wanted to be more than just a front man. I wanted to learn the pizza business from the bottom up, so that I could be part of Little Caesars after I got out of baseball. “I have every intention of doing that with you, Mickey,” Ilitch told me. With that, I agreed to a two-year contract right then and there in the car.

Everything went well between us initially, but at the end of the second year right around the Christmas holidays, I got a letter saying my services were no longer needed at Little Caesars. “What the hell did I do wrong?” I wanted to know.

It was a business decision pure and simple — a matter of brand recognition and cost efficiency. Nothing more, nothing less.

What also happened two days after the World Series as we drove from Flint to Utica was that we got pulled over for speeding. Ilitch was the one driving, trying to make up for the time we lost in Flint. A state trooper came up to the car to ask where we were going in such a hurry, and Mike replied with urgency in his voice: “I have to get this guy to Utica! He’s supposed to be signing autographs at Little Caesars! We’re way behind schedule!”

“Who is this guy?” The officer asked, not knowing who else was in the car.

“Well, I’ll be damned,” the trooper said. “You better get going or else you’ll be late.”

I never again heard from Ilitch after Little Caesars let me go. My hopes of learning the pizza business abruptly ended, which disappointed me. When he owned a professional softball team, we were walking toward each other at a game one time, but I avoided him. It wasn’t until Comerica Park opened in 2000 that we met again. I got on an elevator that he and his wife were already on. I didn’t see him right away, but suddenly I heard someone ask, “Can you still pitch?”

Recognizing the voice, I looked around and saw him. “The curveball isn’t what it used to be,” I replied. Then I reached over to shake his hand. I also gave Marian a hug. That’s the first time I had spoken to Ilitch since he had let me go more than 30 years before, and I never saw him again after that. But I also never forgot what he had said about me: “Why should I pay him when I’ve got him for free?”

That was his reasoning for firing me. It hurt at the time, but I couldn’t argue with the logic. And even if I could argue with it, there was nothing I could do about it. The man had made up his mind.

"Joy in Tigertown" is available everywhere books are sold, including Amazon, Barnes & Noble, Indiebound.org, and TriumphBooks.com.