Auburn's Casey Mize 'extremely happy' to go No. 1 to Tigers

Auburn's Casey Mize 'extremely happy' to go No. 1 to Tigers 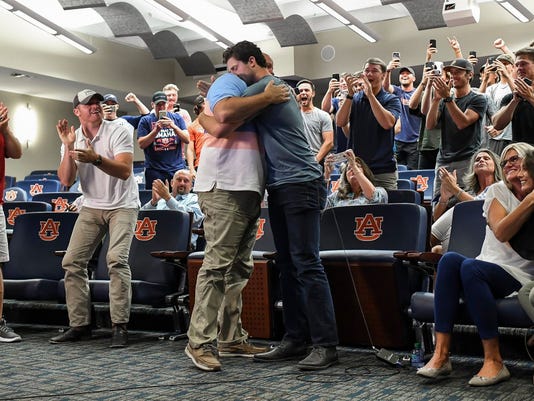 Auburn pitcher Casey Mize receives congratulations after he was picked No. 1 overall by the Detroit Tigers in the first round Monday of the Major League Baseball draft.(Photo: Courtesy of Auburn University)

Detroit — When it came time Monday to cash in on their consolation prize from a bad 2017 season, the Tigers went with a player they steadily viewed as the top talent in 2018's big-league draft.

The Tigers got a badly needed hitter with their second turn, No. 44 overall, when they snagged Georgia prep outfielder Parker Meadows, a 6-foot-4, left-handed batter with speed and power who can play center field or a corner spot.

"It's a relief to have it out of the way," Mize said just after midnight Monday, five hours after the Tigers had ended all the draft-day suspense by making him the first of some 1,500 players chosen by big-league teams through Wednesday.

"I know I'm extremely happy with how everything came out."

Mize said he learned he would be first overall at the same time everyone else did — when Rob Manfred, baseball's commissioner, announced it during MLB Network's draft show. Mize had been aware for months that the Tigers were seriously considering him at "one-one," as the pick is known.

"I’m looking to learn more," he said of a Tigers organization he is expected to join, officially, some time this month. "I don’t know a ton. I think the relationships (with the Tigers front office) clicked very quickly. The meetings we had went very well. I think it just clicked for us."

Mize, 21, has a 2.95 ERA in 16 starts for Auburn, which is playing in the NCAA tournament as one of the elite teams from a typically powerful Southeastern Conference.

Scott Pleis, the Tigers director of amateur scouting, said late Monday that Mize has "MLB stuff right now," but that the Tigers will not rush his big-league timetable.

"First of all, he's got four pitches," Pleis said. "What separates him, is we see a guy with power, and while we see guys who might have a good breaking ball and a good slider, very rarely do you see a guy with power up to 97 (fastball), a plus split, a plus slider, a plus cutter, with plus command. Usually those guys with plus stuff have fringey control.

"Rarely do you see guys with stuff, and with command."

More: Meet the eight No. 1 draft picks to play for Tigers

Mize's overall package was so strong, the Tigers backed away from drafting an impact bat at one-one.

There was another reality at work there. The Tigers also had come to view the 2018 crop of amateur hitters as being somewhat lukewarm. In the end, they did not believe any of the favored hitters — Joey Bart, Alec Bohm, Nick Madrigal, or Jarred Kelenic — had as much promise as Mize might deliver long-term.

Other teams weren't as wary after Mize was scooped up by the Tigers.

Position players were taken in the next five slots: Bart to the Giants at No. 2, followed by Bohm to the Phillies, and Madrigal to the White Sox. University of Florida third baseman Jonathan India was the Reds' choice at No. 5, followed by Kelenic, who went sixth to the Mets.

Monday's build-up to the Tigers' first pick was made more intriguing by negotiations between the Tigers and Mize's agent, the Bledsoe Agency.

It is understood that the sides were locked in talks that are typical with first-round picks, particularly those at the highest level.

The Tigers and all big-league teams are bound by Manfred's rules to observe a salary ceiling for any particular draft pick. The Tigers had a "slot" allocation of slightly more than $8 million for their first overall pick.

It is known that the Tigers, in keeping with past drafts, were hoping to sign Mize for less than $8 million — likely somewhere in the $6 million-$7 million range. Teams then use any money saved in such deals to attract later draft picks who often must be steered away from either college scholarships, or, because college juniors are eligible for the draft, from returning for their senior year.

Mize's reps, however, in the fashion of sports agents, were driving for optimum dollars that appeared to be at the heart of Monday's tight-lipped chatter and news blackout preceding Manfred's announcement.

In the end, the sides apparently were close enough in numbers to allow the Tigers their shot at Mize. While he can ignore the Tigers' offer and return to Auburn for his senior year, it is all but certain the man from Springville, Alabama, will join a Tigers farm heavy in pitching.

Pleis was noncommittal late Monday, but it is doubtful Mize will pitch this summer in the Tigers minors. With more than 100 innings already in the bank for his 2018 season, and with Auburn still involved in the NCAA Tournament, Mize is expected to be given the summer off, as was the case a year ago when the Tigers drafted University of Florida ace Alex Faedo, who did not throw his first professional pitch until this spring.

Rounds 3 through 10 of the 2018 draft will unfold on Tuesday. The remaining 30 rounds are set for Wednesday.