It took Torii Hunter some 700 at-bats to figure it out at the big-league level; Jones has only 399 plate appearances 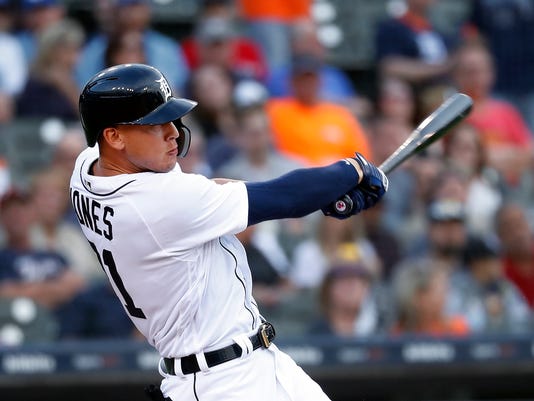 Hunter is in town this weekend, being honored with the Willie Horton African American Legacy Award. Gardenhire, of course, managed Hunter with the Twins for most of his career.

“As a young guy coming up, he was raw,” Gardenhire said. “Really raw, but a very, very talented guy with a lot of tools. It was a learning process. He was pretty wild when he got up (to the big leagues). He would swing at pitches over his head and all of that.

“Still, he had all the gifts as a center fielder. He was unbelievable, even as a kid.”

Sounds a little familiar doesn’t it? Gardenhire, in his first year managing the Tigers, is grooming a similarly raw and wild talent in JaCoby Jones.

But there are similarities between the player Hunter was when he was breaking in with the Twins and the player Jones is right now. Hunter struggled to develop plate discipline. He swung at a lot of bad pitches. He struck out a lot.

“He learned, though,” Gardenhire said. “He talked with a lot of really good players (Kirby Puckett foremost among them) and he finally understood that you could actually figure out what a pitcher was trying to do against you.” 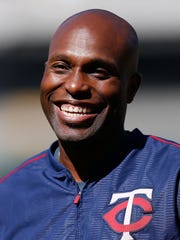 “JaCoby is going through his good moments and his bad moments,” Gardenhire said. “He’s fighting himself, as most hitters do, trying to stay at this level, trying to break in and get comfortable at it.”

Hunter went through it in 2000, his second full year in the big leagues. He hit .180 in the month of May that year, striking out 14 times. He was also in the process of changing his swing mechanics and he was sent back to Triple-A.

Jones has already gone that route once. He made the Tigers out of spring training last season, but his strikeout rate climbed over 40 percent and he was sent back to Toledo. His average is down to .219 now, but the Tigers seem committed to letting him work through it at the big-league level.

“He’s so athletic,” Gardenhire said. “He tries to be a bit of a superman at times, and that’s part of the growing up process. You’ve got to learn to control the situation and not let it snowball. Even though you struck out the first time up, you can’t be worrying about striking out the second time.

“It kind of gets into his head and he’s got to get past that. And that comes with playing time. You need a lot of at-bats in this league to say whether you are going to be able to make it or not. He hasn’t had all those at-bats.”

It took Hunter about 700 major league at-bats to figure it out. Jones has 399.