Votto's slam had a 1-percent hit probability, but it got a boost over the wall banging off Castellanos' glove

Detroit Tigers starting pitcher Drew VerHagen holds his nose after being hit on the face attempting to catch a throw to first in the seventh inning. John Minchillo, AP
Fullscreen 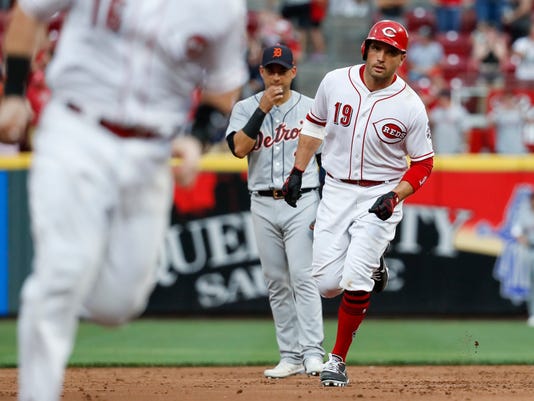 Well, OK, it was ugly and it doesn’t deserve an asterisk, for sure.

But allow for the fact that the one hit plated four of the runs. And, according to Statcast, that fly ball was struck with an exit velocity of 93.8 mph with a 43-degree launch angle and had a hit probability of 1 percent.

Reds All-Star Joey Votto, batting with the bases loaded and no outs in the third inning, lofted a 2-1 curveball from Boyd 329 feet to the wall in right field. Nick Castellanos leaped and the ball caromed off his glove and went over the wall.

"I was up and over the wall and the ball hit off the tip of my glove," Castellanos said. "It is what it is. We play in the biggest ballpark in the whole league (Comerica Park). Every ballpark has its own dimensions.

"In Comerica, that ball is probably not on the (warning) track."

More: Game within the game: How Hardy punched-out his nemesis in pivotal at-bat

The grand slam, Votto’s first home run in 30 games, ruined Boyd’s night and sent the Reds to a 9-5 win and ended the Tigers' five-game winning streak.

"It's the walks that got me," said Boyd, who walked three, two ahead of Votto in the third. "Walks kill you. Fly balls, home runs like that in this park are going to happen, especially with the wind blowing out. You expect that to happen here.

"But the walks you have control over and that's what I need to get better at."

Votto's slam may also trigger a Rally Bird craze in Cincinnati. Before Votto hit his grand slam, he tried to shoo a bird (species undefined) that was languishing between the mound and home plate. The bird moved a few feet over and Votto clubbed the very next pitch.

As Votto crossed the plate, he flapped his arms bird-like as he jogged into the dugout.

Later, in the sixth inning, again with the bases loaded, the bird reappeared in center field. It was picked up on the two big scoreboards. Adam Duvall responded with a two-run double off Warwick Saupold.

"There was a lot of stuff going on," Gardenhire said. "We walked, I don't know how many we walked (six, four scored). Any time you put runners on it's a gift. Sometimes there are smart walks and sometimes you are just missing the plate.

"In a park where the ball flies, you can turn a one-run inning into a crooked number. And in this game, crooked numbers are never good."

Boyd had allowed two runs or less in five of his last six starts and posted four strikeouts through the first two innings, including an impressive punch-out of Votto. Down in the count 2-0, he got Votto to look at three straight strikes — a change-up (78), fastball (89) and a slider (80).

But things turned bad quickly in the third. He walked speedy Billy Hamilton, gave up a hard single to Jose Peraza and walked Tucker Barnhart in front of Votto.

"I can't control how far the ball goes or what the wind is doing," Boyd said of his reaction to Votto's fly ball carrying out. "I threw the pitch I wanted to. I executed and got him out in front on it. That wasn't the problem.

"The problem was the batters before him that I walked."

In the fourth inning, Barnhart ripped an RBI double, scoring Peraza from first. Peraza got on base via another walk.

"It was a rough night for us," Gardenhire said. "Not one of our better nights, mostly because of the other team."

The Tigers didn’t get much done against Reds big right-hander Sal Romano (6-foot-5, 270 pounds), who came in with an elevated ERA of 5.67.  They mustered four hits, all singles and two of them by Leonys Martin, in seven innings.

The made some noise in the ninth, though. Three straight singles by Grayson Greiner, Victor Reyes and Jose Iglesias set the table against reliever Wandy Peralta.

Pinch-hitter JaCoby Jones walked in one run and Martin ripped a double to score two more. Martin, by the way, reached base in all five of his at-bats, two singles, a double and two walks.

The Reds had to bring in right-hander Dylan Floro. Jeimer Candelario and Niko Goodrum brought in runs with sacrifice flies.

Too little too late, but indicative of the Tigers' fight level.

"It's about playing the game to the end," Gardenhire said. "We had a nice little rally, but when you get down by that far, it makes it kind of tough."