Three unearned runs, and a rising pitch-count for Blaine Hardy, help doom the Tigers on another night when the bullpen fails.

Detroit Tigers' Dixon Machado prepares to slide into third for a triple during the third inning. Carlos Osorio, AP
Fullscreen

Detroit Tigers' Victor Reyes (22) and John Hicks (55) are greeted at the dugout by Jeimer Candelario after scoring on a triple by Dixon Machado during the third inning. Carlos Osorio, AP
Fullscreen 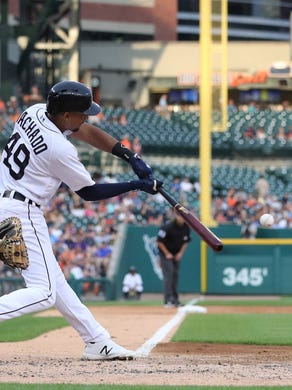 Oakland Athletics' Mark Canha (20) is greeted in the dugout after scoring during the fourth inning. Carlos Osorio, AP
Fullscreen 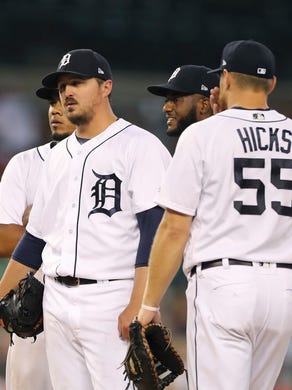 Detroit — He seemed to be as stunned, as lost for explanations, as were fans and probably teammates who couldn't figure out how John Hicks butchered a throw from Niko Goodrum in the fourth inning of Tuesday's game at Comerica Park.

That the Tigers lost the game, 9-7, after leading 6-0 early, was an autopsy that included Hicks' error as part of multiple mortal wounds.

It happened with a man on first and two out. Tigers starter Blaine Hardy got a ground ball from Stephen Piscotty, who was about to be tossed out routinely by Goodrum. But the ball conked Hicks on the left arm and bounced away.

Error. And not just any old glitch. The A's followed with a pair of doubles and three runs.

"He threw it from an angle," Hicks said, "and it looked like it might bounce. I stayed down to pick it, and it kind of handcuffed me."

Hicks, a longtime catcher who has moved to first base as Miguel Cabrera's replacement, has been playing deftly, for the most part, at first. He made a superb diving stop in the eighth on Jonathan Lucroy's bullet of a grounder and threw out Lucroy on a throw to Alex Wilson.

He also had a pair of hits Tuesday. But it was the early gaffe Hicks knew would be remembered. All because it was the bungle that helped halve a big Tigers lead.

Nick Castellanos is at it again — raking.

He had his third consecutive game with multiple hits as he ripped a double and a single. He added two walks, one of which was intentional. In the last three games, Castellanos has gone 6-for-12, with two doubles, a home run, and four RBIs.

Jeimer Candelario was caught in an 0-for-14 slide when he got rebooted Tuesday. He had a double and a single.

While the Tigers bullpen has had its spills of late, here and there the work has been sterling.

Taking a bow Tuesday were Buck Farmer and Alex Wilson.

Farmer threw two innings, didn't allow a hit, and struck out two, thanks mostly to a boring fastball that was radar-confirmed as high as 95.6 mph.

Wilson pitched 1⅔ innings, didn't allow a hit or a walk, and had a strikeout. His ERA, after some spring slip-ups sent it soaring, now sits at 3.64.