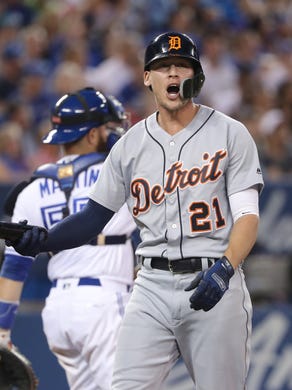 JaCoby Jones of the Detroit Tigers reacts after striking out against the Toronto Blue Jays at Rogers Centre on June 29, 2018 in Toronto, Canada. The Blue Jays won 3-2, handing the Tigers their 10th straight defeat. Tom Szczerbowski, Getty Images
Fullscreen

Tiger Jose Iglesias turns a double play in the first inning as Blue Jay Teoscar Hernandez avoids the throw as he runs to second base. Tom Szczerbowski, Getty Images
Fullscreen

Tiger JaCoby Jones #21 is congratulated by teammates after scoring a run in the third inning. Tom Szczerbowski, Getty Images
Fullscreen

Blue Jay Yangervis Solarte is tagged out by Tiger Jeimer Candelario as he tries to advance from first base to third base on a single by Kendrys Morales in the fourth inning. Tom Szczerbowski, Getty Images
Fullscreen

Blue Jay Devon Travis dives but cannot come up with the ball on a single by Tiger Victor Martinez in the seventh inning. Tom Szczerbowski, Getty Images
Fullscreen

Blue Jay Devon Travis cannot come up with the ball on a single by Tiger Leonys Martin in the ninth inning. Tom Szczerbowski, Getty Images
Fullscreen

Blue Jay Tyler Clippard celebrates his team's victor after getting the final out of the game in the ninth inning. Tom Szczerbowski, Getty Images
Fullscreen

Unless, of course, it happens to be the length of a big-league team's losing streak.

That's the Tigers' relationship with a single digit, and if their offense doesn't improve Saturday against the Jays, it'll be an 11-game skid tied to a team from Detroit.

It was the usual story Friday at Rogers Centre in the first of a four-game series against the Jays, which went to Toronto, 3-2.

"Just extends on," said Tigers manager Ron Gardenhire, who was asked if he was worried about all the losses "piled on" — stacking up following Detroit's last victory, way back on June 17 against the White Sox.

"I think it's already piled on," Gardenhire said. "We're deep into the pile-on."

More: No surprise, but looks as if Castellanos will be a lone Tigers All-Star nominee

More: Henning: Tigers had concerns about Chris Bosio before he was fired

The Tigers haven't lost 10 consecutive games since their season from Gehenna in 2003 when they were 43-119.

They already are seven games from their 2003 victory total. So infamy is pretty much a dead issue, even if this June tailspin isn't.

It needn't have finished so drearily for the Tigers as they and the Jays attempted to entertain a hot-night crowd of 24,068. They were close, as they often have been the past two weeks, to a winning one.

But they had only one genuine RBI. It came in the seventh when Jeimer Candelario, batting left-handed, parked a Stroman fastball just beyond the left-field wall for his 12th homer of the season.

It cut the Jays' lead to 3-2, but that was all the firepower the Tigers were going to brandish over the closing innings.

"It's not like we're not trying," Gardenhire said. "We're not getting blown out every night. It's just not happening."

Francisco Liriano started and was solid for six innings. He had only one sour stretch, the fourth, when a two-run homer from Justin Smoak, followed by two skimpy singles sandwiched around a pair of walks were worth all three Jays runs.

And another Tigers defeat.

"He had one bad inning," said Gardenhire, who watched Liriano give up a pair of quick singles, with one of the baserunners gunned down on Nick Castellanos' bullet of a relay from right field to Candelario at third.

The bigger mess arrived a batter later when Smoak golfed a Liriano slider over the fence in left. Then the matching pairs of walks and singles and the Tigers, who had an early 1-0 lead, were down, 3-1.

Gardenhire's gang, however, barely flirted with anything remotely considered to be an offense against Jays starter Marcus Stroman and his bullpen allies.

They had a true shot in the third after JaCoby Jones led off with a single that third baseman Yangervis Solarte couldn't quite handle, followed by a sweet hit-and-run single to right by Jose Iglesias, which sent Jones steaming into third.

But the following batter, Dixon Machado, pretty much blew up the inning when he rapped a double-play grounder to second. Jones scored, but the Jays were happy with the bases-empty tradeoff.

The Tigers weren't close to scoring again, apart from Candelario's bomb to left. They did get Leonys Martin aboard in the ninth when he singled off second baseman Devon Travis in short right field.

But he was exiled when Candelario struck out against Jays closer Tyler Clippard, as did Nick Castellanos. Clippard then got Martinez, on 3-and-2, to pop to the third baseman.

The Tigers had only six hits Friday: a pair of singles by Victor Martinez, and one each from Jones, Iglesias, and Martin. Their only extra-base knock came courtesy of Candelario.

Gardenhire, of course, has been through losing streaks. Most of the Tigers have had a 10-gamer at some point in their baseball lives.

It isn't something accepted casually. Neither is it anything that requires psychiatric treatment.

"We'll have a beer and come back tomorrow," the manager said, "and let's play a ballgame."