Tigers catcher James McCann is mired in a 5-for-45 skid with 13 strikeouts over the last 13 games. 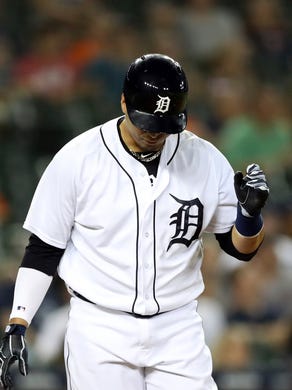 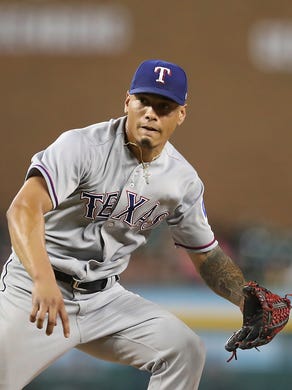 Tigers catcher James McCann was batting .111 over the past 13 games heading into Thursday's home stand against the Rangers.(Photo: Carlos Osorio, Associated Press)

Detroit — Don’t call it an off day.

Tigers catcher James McCann was not in the starting lineup Thursday, but by the time the media was let into the clubhouse at 3:40 p.m., McCann had already sweated through one workout shirt, had gone over video of his recent at-bats and was headed down the steps to the batting cage.

Normally one of the most accessible players in the room, McCann’s got more important things to tend to these days than filling reporters’ notebooks. Priority one: working his way through an ugly hitting slump.

Since he got three hits on June 15, McCann has gone 5-for-45 with 13 strikeouts in the last 13 games. This present skid started around the time he and his family were felled by a virus. He missed three games and lost 15 pounds — weight which he has not regained.

“Catching and playing in this heat, I don’t know how you are going to gain it back,” manager Ron Gardenhire said. “It’s not like he doesn’t eat. But catchers lose weight through the course of a season.”

The weight loss isn’t the problem; at least it’s not the primary problem. His swing mechanics have gotten out of whack. The hits aren’t coming, neither is much hard contact.

“Basically, it looks like he’s cutting off the ball a little bit,” Gardenhire said. “He’s not getting through it. He’s spinning off and the bat head is coming through and it’s actually sending the ball slicing — rather than staying behind it and driving it.”

Per data compiled by Statcast, McCann has barreled up just 4 percent of the 164 balls he’s put in play. That’s a career low.

“Yes, he’s lost weight, but more than anything else, mechanically he’s got a couple things he needs to adjust,” Gardenhire said. “We’ve watched video. I’ve even talked to him. He knows what he’s doing (wrong). But he gets in a game where a guy is throwing 95 mph and it’s not easy to adjust.

“It’s got to come slowly. He’ll figure it out.”