McCann has hit .345 over the last eight games and on Monday he put on a clinic on how to block pitches behind the plate 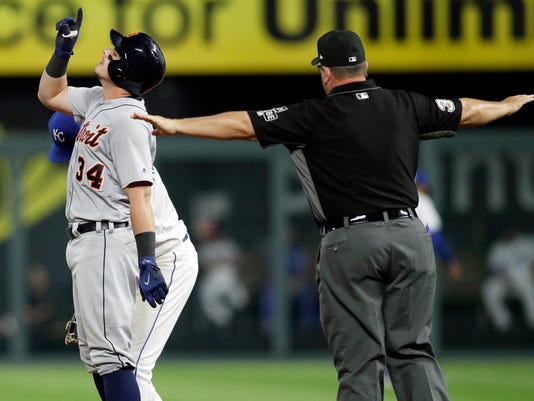 “I was looking at some of the pitches he blocked and they weren’t even on the chart,” said Steve Liddle, the Detroit Tigers bench coach who oversees the catchers. “You only saw like half a ball on the printout.”

It looked for a while like McCann was playing cricket behind the plate. He blocked, according to Statcast and Tigers data, nine balls, six thrown by starter Francisco Liriano. Only one got by him.

“They were all critical,” Liddle said. “Really, that determined the outcome of the game. Only one time did a runner advance 90 feet. It could’ve been nine wild pitches. Plus, he had to reach way out of the strike zone a couple more times to catch pitches, and those don’t count as blocks.”

McCann’s acrobatics, painful though they might’ve been, helped keep the Royals from adding to their 3-0 lead and kept the game in reach until the ninth inning, when a two-run double by Jim Adduci tied it.

And it was a fitting reward for McCann that he followed with the winning double.

"It's definitely very rewarding in a game like that," McCann told MLB.com after the game. "But as awesome as that game-winning double, the number of blocks I had was equally as important, if not more. It's a different ballgame if runners are going wild on the bases."

“I throw a lot of wild pitches and he’s great behind the plate,” he said. “I always trust him and that’s a good feeling. I appreciate it a lot. When you have somebody back there you can trust, you can throw any pitch in any situation.”

McCann was back behind the plate Tuesday, even though manager Ron Gardenhire checked with him to make sure he was feeling OK.

“He said he felt a lot better than he thought he would,” Gardenhire said. “He got hit in the hand a couple of times. He got hit between the knuckles on his right hand; that was a pretty good one.”

McCann is starting to heat up offensively, too. He had three hits and three RBIs Monday and he was hitting .345 over his last eight games entering Tuesday.

“What’s really exceptional about James is he never takes his at-bats behind the plate,” Liddle said. “And he is prepared. You talk to (pitching coach) Rick Anderson about how prepared James is for the upcoming series. He knows the hitters. He studies them and he’s trying to apply our pitchers’ strengths to the hitters’ weaknesses.

“He always trying to put the pieces of the puzzle together so we can get a positive outcome.”

It was almost baseball justice that McCann was rewarded with the winning hit Monday.

“To take the beating that he did, balls bouncing off his face, off his knuckles, and then be able to step up there and get a hit for us was huge,” Gardenhire said. “That's kind of a catcher's life. Their job is mainly to get a pitcher through the innings. The good ones can find a few hits here and there, and he did that.”