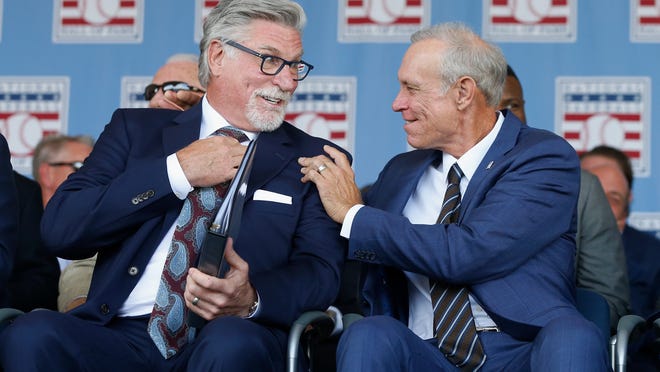 Alan Trammell finally has booked his place in Baseball's Hall of Fame, and on the outfield brick wall at Comerica Park.

To celebrate the occasion, the Tigers on Friday are set to release a new book, "Three: A Salute to Alan Trammell," a 170-page tribute to the longtime Detroit shortstop and fan favorite.

The book, retailing at $40, will debut at Comerica Park, and each copy will individually numbered. It was written by Tom Gage, the longtime Tigers beat writer at The Detroit News and a member of the Hall-of-Fame's writers' wing.

Trammell, 60, played all 20 of his major-league seasons with the Tigers, leading them to the 1984 World Series championship. He also managed and coached with the Tigers, and now serves as a front-office adviser.

He was inducted into the Hall of Fame last month, alongside longtime teammate Jack Morris, whose No. 47 was retired by the Tigers earlier this month.

Trammell's No. 3 will be retired by the Tigers in a Sunday ceremony, set to start around 12:30, ahead of the game against the White Sox at Comerica Park. Several members of the 1984 title team are set to be in attendance, as they were for the Morris celebration.

This is Gage's third book, following "The Big 50: Detroit Tigers: The Men and Moments that Made the Detroit Tigers" (April 2017) and "Joy in Tigertown: A Determined Team, a Resilient City, and our Magical Run to the 1968 World Series" (June 2018).