While Alan Trammell and Jack Morris have been celebrated this summer with a Hall-of-Fame induction and number-retirement ceremonies, Whitaker continues to be overlooked. 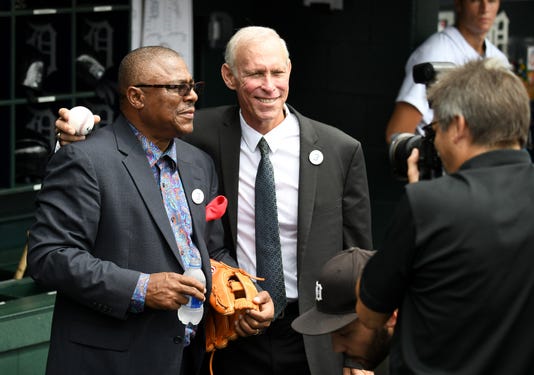 Detroit — Does he believe he belongs? Of course he does.

But if Lou Whitaker is bitter that he's not in the Baseball Hall of Fame alongside Alan Trammell, or that his No. 1 isn't painted next to Trammell's No. 3 on the outfield brick wall at Comerica Park, he's doing a fine job of hiding it.

Whitaker held court with reporters following Trammell's number-retirement ceremony Sunday, and he did a whole lot of smiling, laughing and joking.

"Am I supposed to be mad, am I supposed to be envious?" Whitaker said. "You know, we were a shortstop-second base combination. All the Hall-of-Famers, they say, 'How could this be this way?' But that's life sometimes.

"I have no control, no power. I could go out there and paint my name out there. Maybe that's what I'll do tonight. I shouldn't say this, but if you see paint on the wall tonight beside Tram, they'll come looking for Lou and Lou will be gone!"

As much as this summer has been about Trammell, it's also been about Whitaker. That's no surprise, given how their careers were so linked. They played 19 years together. You couldn't mention one without the other. Tram and Lou, Lou and Tram, pick the order, there are no wrong answers.

Trammell's highlight video at the Hall-of-Fame ceremony in Cooperstown, N.Y., in July could've been just as easily been a Whitaker highlight reel, given how often he appeared in it. He was cheered when Trammell mentioned him in his Hall-of-Fame speech, and again Sunday when both Trammell and Kirk Gibson talked about how much Whitaker deserves all the accolades Trammell has been getting.

"Lou Whitaker's plaque should be hanging next to Tram's," Gibson said, in a line that drew huge roars from the crowd of 34,036, and even applause from Whitaker.

Alan Trammell saw his No. 3 retired by the Tigers on Sunday at Comerica Park. Afterward, he met with the media and discussed a variety of topics, including his long-time double-play partner, Lou Whitaker. The Detroit News

Trammell, a boy from the West Coast, and Whitaker, from the East Coast, first met in 1976, when Tigers brass decided Whitaker should be a second baseman — a decision Whitaker said, "broke my heart," given he'd always played third base. He considered himself the next Brooks Robinson.

The Tigers had other plans, and the rest is history. They were called up the same day in 1977, and played side by side until Whitaker retired following the 1995 season. Trammell played one more season, joining Al Kaline as the only Tigers to play 20 years with the team.

Interestingly, Trammell's decision to play one more year might've thrown Whitaker's path to Cooperstown off track. That meant Whitaker would appear on the Hall-of-Fame ballot a year earlier, without Trammell. Had they debuted on the ballot together, the Tram-and-Lou collective narrative possibility would have led to some better results. Instead, Whitaker, on an absolutely stacked ballot that included eight eventual Hall-of-Famers, didn't receive even the 5 percent necessary to stay on the ballot. Many baseball writers remain embarrassed by the oversight.

Trammell debuted on the ballot in 2002, and remained for 15 years — albeit, never getting close to the 75 percent needed for election.

Then, last year, the Modern Era Committee unveiled its ballot — Trammell and Jack Morris, but no Whitaker. It was another inexplicable snub for a player Baseball-Reference.com says most compares to the likes of Ryne Sandberg, Trammell, Roberto Alomar, Joe Morgan and Barry Larkin, all Hall-of-Famers. 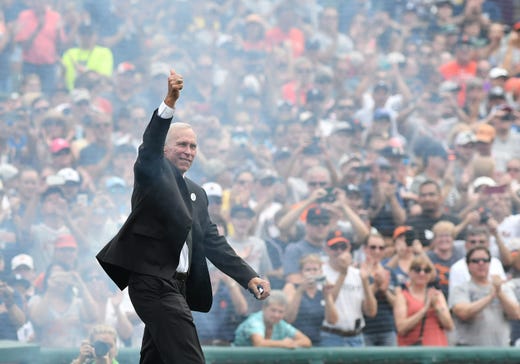 Alan Trammell walks onto the field during a special pregame ceremony to retire the No. 3 of former Tiger shortstop and Hall of Fame shortstop Alan Trammell. Robin Buckson, Detroit News
Fullscreen 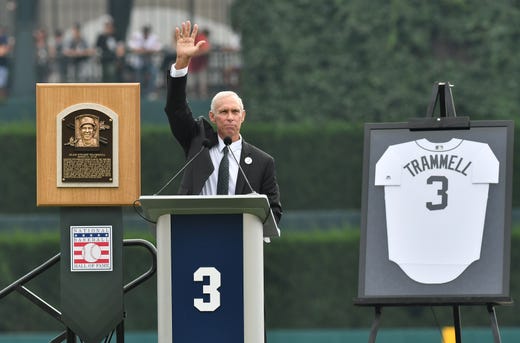 Between his Hall of Fame plaque and his No 3 jersey, Alan Trammell waves to the crowd while he speaks during a special pregame ceremony to retire his number. Robin Buckson, Detroit News
Fullscreen 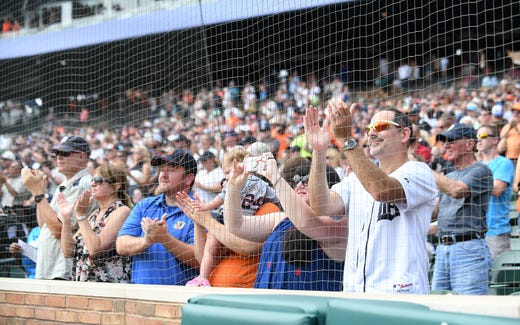 Fans cheer for Alan Trammell before he speaks during the ceremony. Robin Buckson, Detroit News
Fullscreen 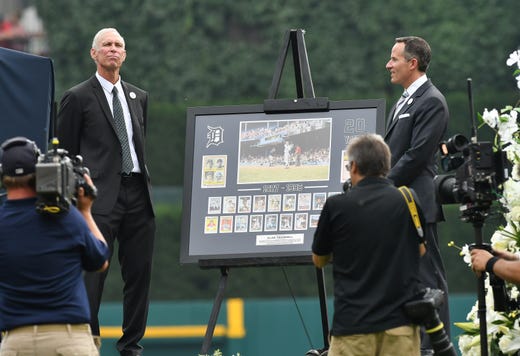 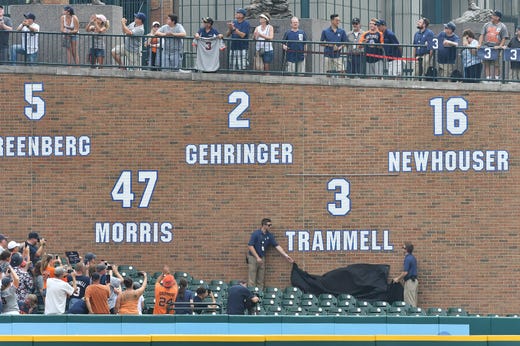 The No. 3 is unveiled during a special pregame ceremony to retire the number of former Tiger shortstop and Hall of Fame shortstop Alan Trammell. Robin Buckson, Detroit News
Fullscreen 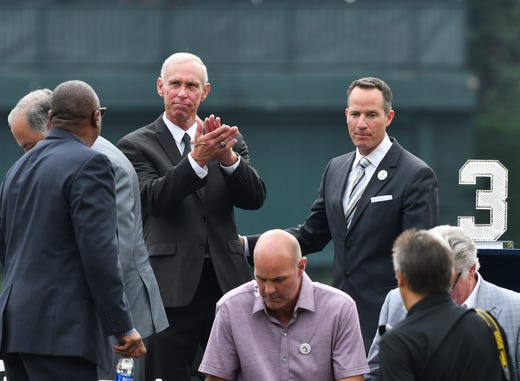 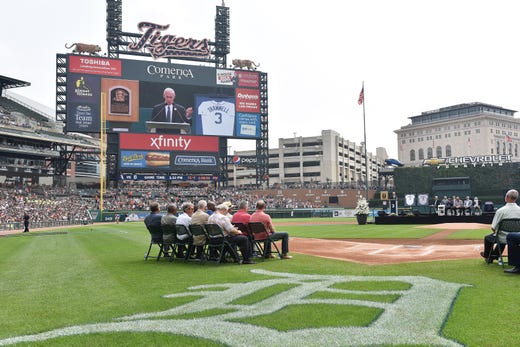 Alan Trammell waves to the crowd while he speaks during the ceremony. Robin Buckson, Detroit News
Fullscreen 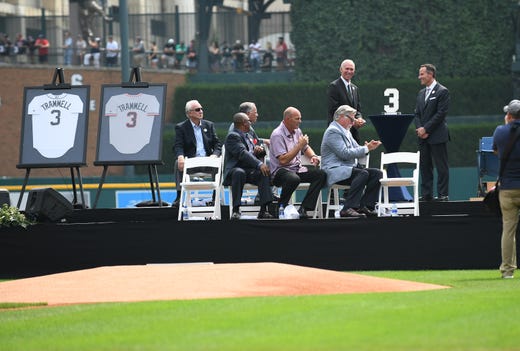 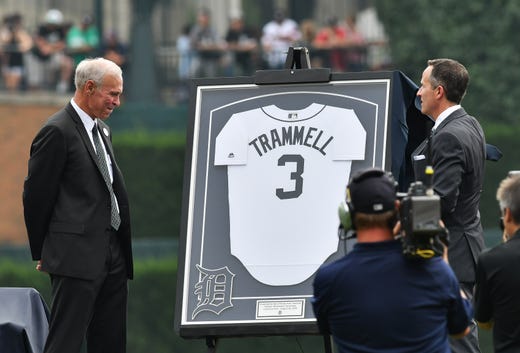 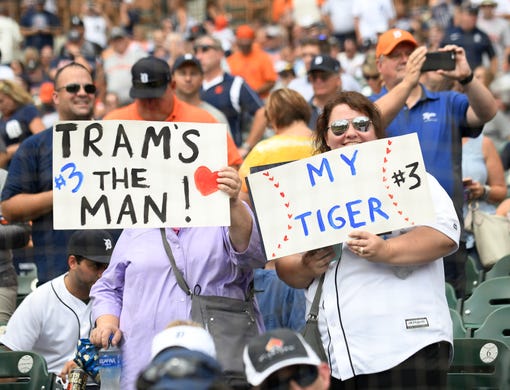 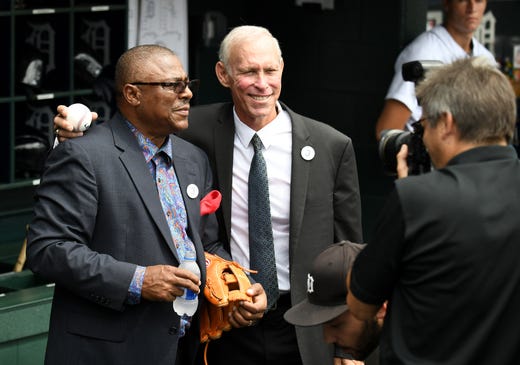 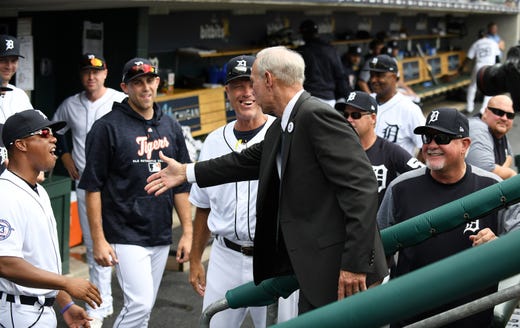 Alan Trammell chats with guys in the Tigers dugout before he throws out the ceremonial first pitch. Robin Buckson, Detroit News
Fullscreen 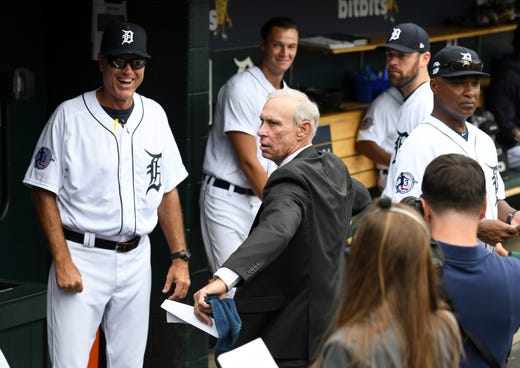 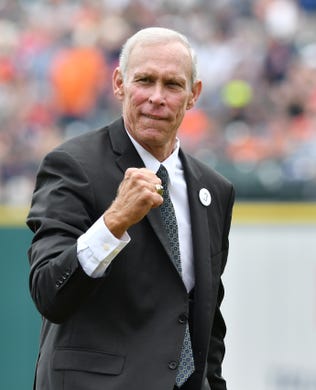 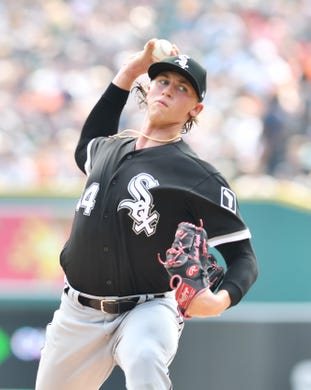 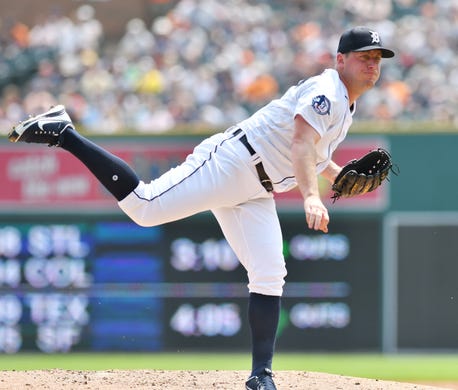 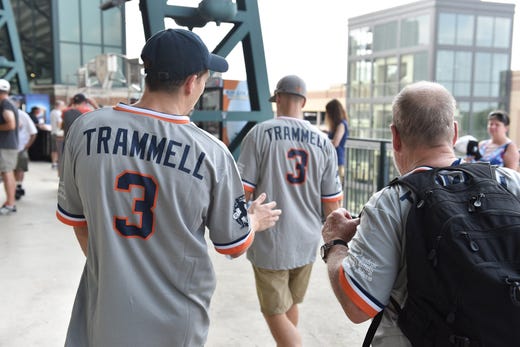 Gatlin Griffin of Tampa, Fla, left, talks with his grandfather, Bruce Griffin of Flagstaff, Ariz., right, following his father, Thomas Griffin of Phoenix while walking at the ballpark. Bruce Griffin was born in Flint and became a Tigers fan before he moved out of state. The three generations wanted to be at the game for the retiring of Alan Trammell's number. Robin Buckson, Detroit News
Fullscreen 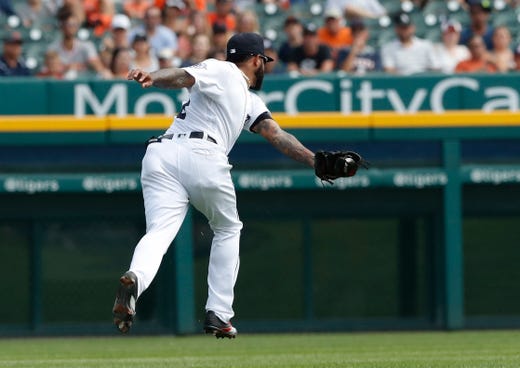 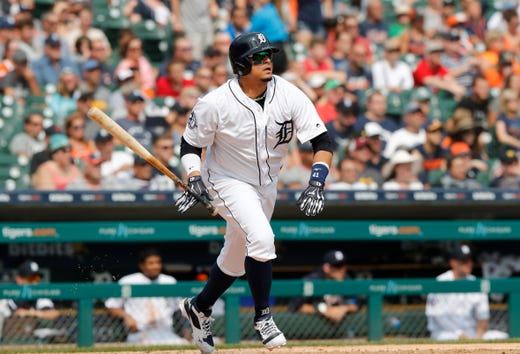 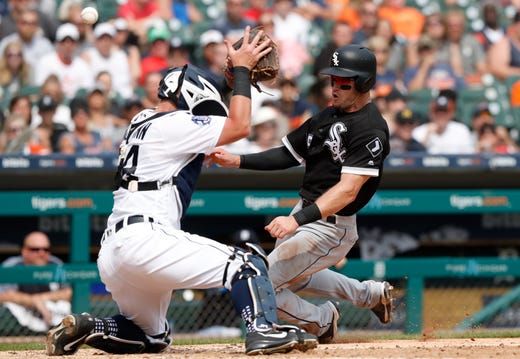 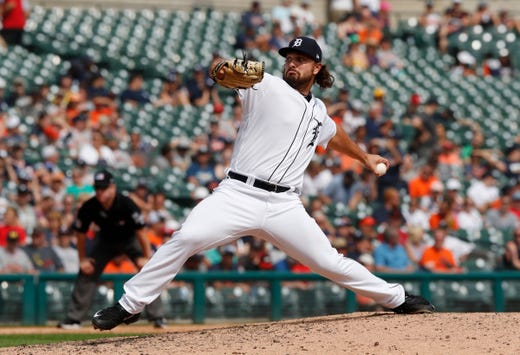 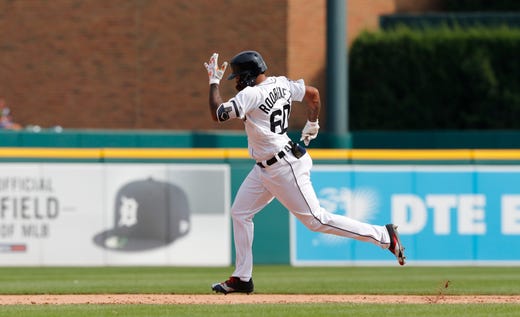 Detroit Tigers' Ronny Rodriguez jumps as he is greeted by third base coach Dave Clark after a solo home run during the ninth inning. Carlos Osorio, AP
Fullscreen 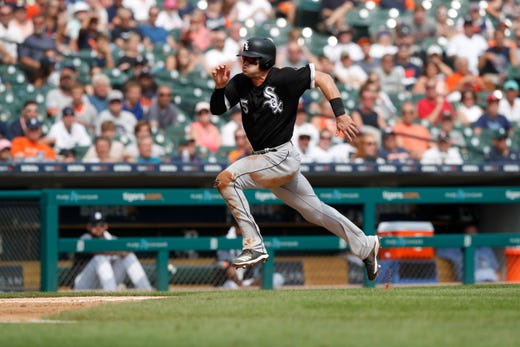 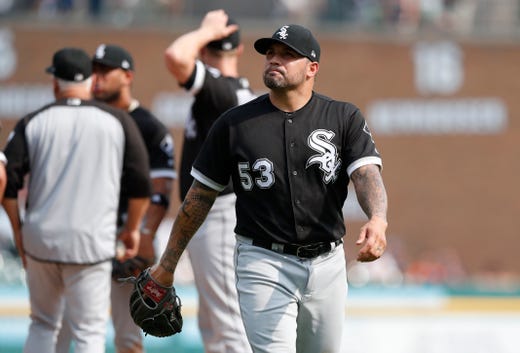 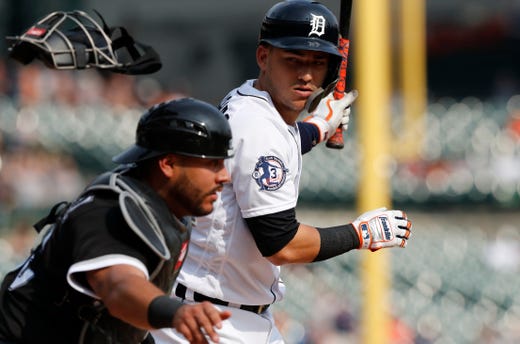 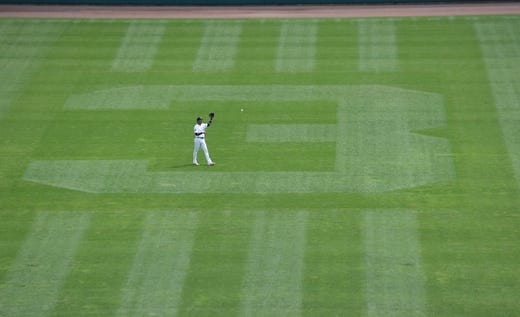 "The love that Lou has not received, it bothers me," Trammell said. "I'm shocked, and hopefully maybe this will help get a little momentum.

"I hope that he's in the Hall of Fame soon, and that he also has his number retired here at Comerica Park."

Whitaker's case will be reexamined in two years, when the Modern Era committee reconvenes. Given all the Whitaker outcry during this summer of Trammell, it's expected he'll at least be put to a vote.

Whitaker's career Wins Above Replacement (WAR) of 75.1 ranks 78th all-time, and actually better than Trammell's (70.7). The three players directly above Whitaker on the WAR list are in the Hall of Fame, as are the six directly below him. Only six second basemen have a better career WAR than Whitaker, and each one of them is in the Hall of Fame.

Whitaker wasn't a media darling, and, however unfairly, that might've hurt his Hall-of-Fame chances — at least, he suggested as much Sunday. Trammell acknowledged Whitaker mostly let his play speak for itself.

"I could've been a friendly person to you guys," Whitaker said. "But my thing was to play baseball, not talk baseball — play baseball. My job as an everyday player was to go out and play. That's what Tram and I did — and we had fun doing it.

"Two young kids having fun playing the game they love for 19 years."

Whitaker, 61, was one of Trammell's first phone calls when he got the Hall-of-Fame call back in December.

Whitaker attended the Hall-of-Fame ceremony for Trammell, 60, and Morris, as well as Morris' number-retirement ceremony two weeks ago, and Trammell's Sunday. He spoke at Trammell's.

This isn't Whitaker's M.O., of course. He's not big on traveling. He doesn't like planes, or long car rides. The spotlight's never been his comfort zone. He likes his quiet, low-key life.

But he couldn't miss celebrating with his 1984 World Series compadres — even if the celebrations have seemed, at least to many, to be a tad incomplete.

"You know, there's gonna be a lot of people when they see Morris, Trammell, wait, something's missing," Whitaker said with a smile. "Trammell, but what about that other guy? How long can that be? ...