Matthew Boyd cannot throw a successful pitch unless he is 100 percent committed to throwing that pitch. 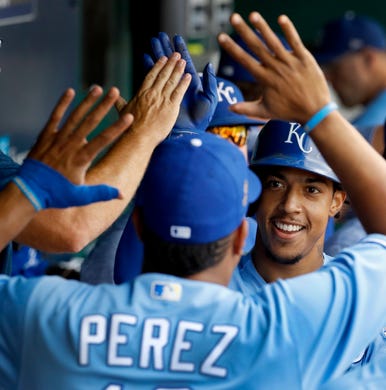 Kansas City Royals' Adalberto Mondesi celebrates with Salvador Perez in the dugout after hitting a two-run home run during the second inning of a baseball game against the Detroit Tigers Wednesday, Aug. 29, 2018, in Kansas City, Mo. Charlie Riedel, AP
Fullscreen 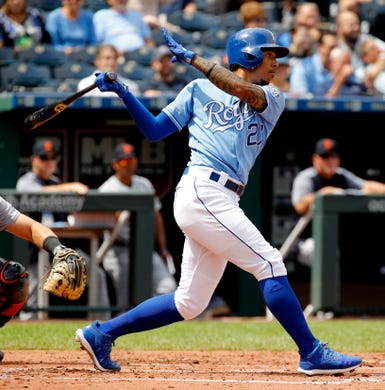 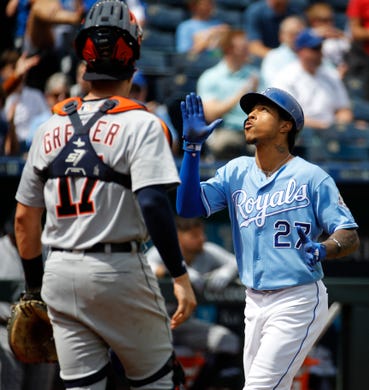 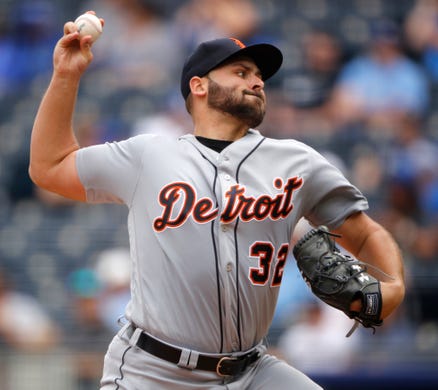 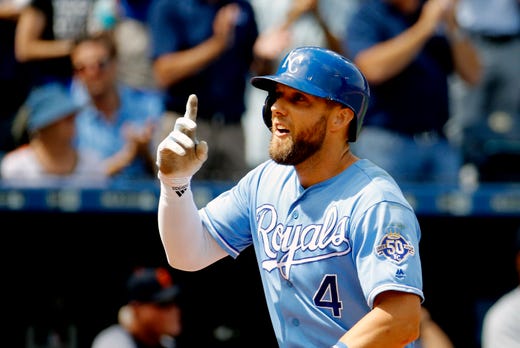 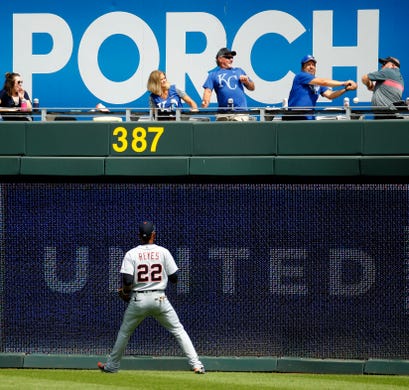 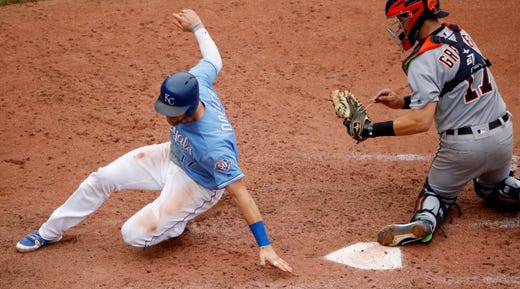 Kansas City Royals' Hunter Dozier (17) is out at home after the tag frm Detroit Tigers catcher Grayson Greiner as he tried to score on a double--lay fly ball hit into by Adalberto Mondesi during the seventh inning. Charlie Riedel, AP
Fullscreen 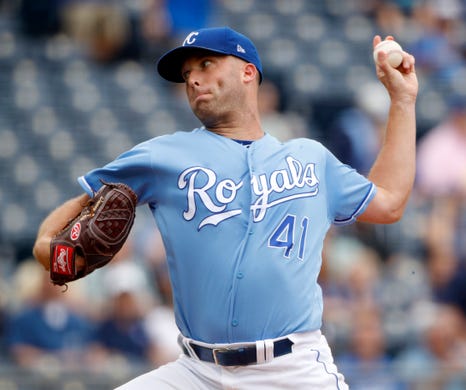 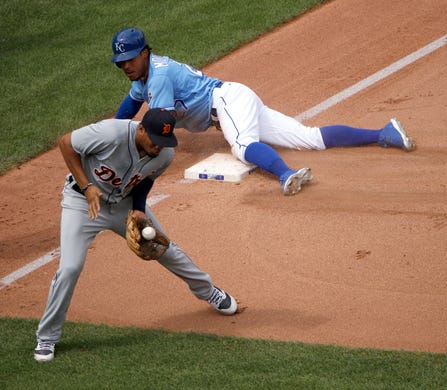 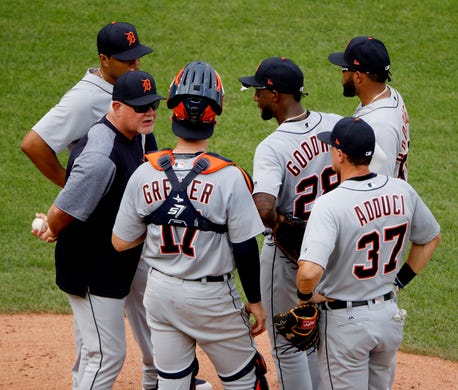 Detroit Tigers manager Ron Gardenhire,left,talks to his players as he makes a pitching change during the fourth inning. Charlie Riedel, AP
Fullscreen 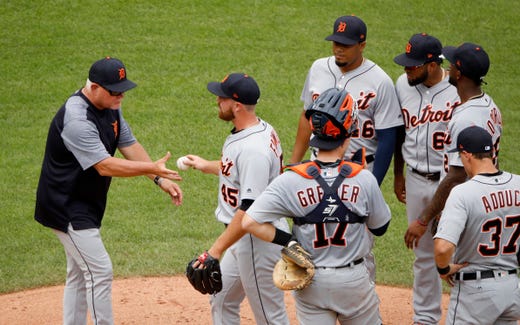 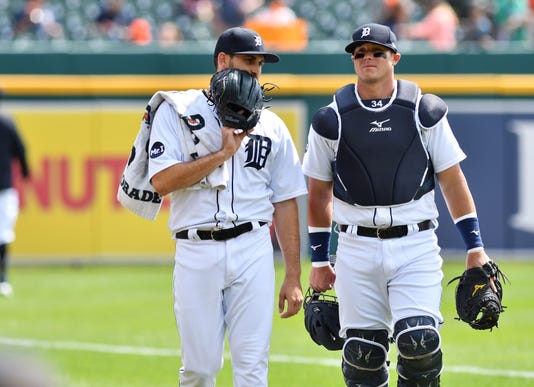 Kansas City, Mo. — Matthew Boyd cannot throw a successful pitch unless he is 100 percent committed to throwing that pitch.

He knows that. It’s been his mantra forever. But, probably for a lot of reasons that made sense at the time and now seem senseless in hindsight, he threw a pitch in the third inning Tuesday night that he didn’t really want to throw.

It was a four-seam fastball on an 0-2 count to Adalberto Mondesi. Catcher James McCann wanted the pitch to be up and in — under Mondesi’s chin if possible, probably to set up an off-speed pitch down and away. The pitch was up, for sure, but over the heart of the plate.

Mondesi, who had hit just four home runs before Tuesday, sent it 410 feet into the left-center field seats — a blast that that ignited a five-run inning and ruined another night for Boyd and the Tigers.

It was clear after the game that Boyd wasn’t happy with that pitch — the location, for sure, but the selection, as well. McCann, too, afterward, admitted it was a bad pitch call. The two battery mates continued their debate in the dugout between innings.

“They were talking about it,” manager Ron Gardenhire said. “’I wanted to do this and you gave me that.’ Well, (Boyd) you’ve got the ball in your hand. That’s all I ever say to a pitcher. You have the ball in your hand, and if you don’t like (the call), and he keeps putting it down, you step off, call him to the mound and say I want to throw this pitch. This is what I want to throw.

Well, it is and it isn’t. Grayson Greiner had been catching most of Boyd’s recent starts, and the two seemed to have good chemistry. Boyd was more inclined to shake off Greiner’s calls than McCann’s. And that’s part of the reason why Gardenhire had McCann catch him Tuesday night.

More: Chip off the old block: Twins' Toby Gardenhire will coach against dad, Ron, in Detroit

That was in Boyd’s mind, no doubt, in the third inning. Had it been later in the game, had he not breezed so comfortably through the first two innings with that four-seamer dancing like it was, maybe he would have shook off McCann’s call and insisted on throwing another off-speed pitch — which he got a swinging strike with the pitch before.

But he did not.

“We could've gone with something different there,” Boyd said, choosing his words carefully after the game. “That's on me. I need to have a better eye for that. Next time. I had a lot of options there and in hindsight, I could have done something different."

McCann didn’t absolve himself, either.

“Obviously, it wasn't the right pitch,” he said.

That it took eight more batters and four more runs before Boyd got back to his original game plan, is another issue. Boyd said he lost the command on his fastball. McCann thought he might’ve still been reeling from the Mondesi homer.

“Really, it was that pitch,” McCann said. “He got to it and from there we maybe tried to do a little too much. We got back to the game plan after that inning, but you get beat, then you try to do too much and all of a sudden, you've gone away from your strengths.”

Gardenhire was asked point-blank if thought there was bad in-game chemistry between Boyd and McCann, as pitcher and catcher.

“No,” he said. “I think they work well together. I just think last night, I don’t know what was going on. I know we’ve been preaching about not shaking and all of that. But you’ve got the ball and it’s your ballgame.

“I don’t like it when they come in and say, ‘I wanted to do this instead of that.’ If you did, well then call him out there and tell him.”

You can bet on this: It will be a long time before Boyd throws another pitch without having complete conviction in it.

Against the White Sox on Sunday, Mikie Mahtook made a perfect throw to the plate and it looked like he had the runner, Adam Engel, dead to rights. But the ball bounced high off the hard turf and over  McCann's glove.

On Wednesday, Mahtook lined up another throw from left field. He fired another seed, right on target. This time the bounce was true and he gunned down Hunter Dozier in the seventh inning.

"You don't that many opportunities to throw a guy out," Mahtook said. "A lot of different factors go into him being out. You can make a perfect throw, like last week, and it can take a weird hop.

"I didn't think I was going to be able to get him, I thought it was hit too deep. But I took a peek and told myself I was going to throw it head-high to the cutoff guy and it ended up being a perfect throw."

Mahtook knocked in both Tigers runs with a single and his fifth home run. He's hitting .293 over his 14-game on-base streak.

"You are never really out of it if you believe you aren't out of it," Mahtook said of his tumultuous season. "That's the mindset I took. It wasn't a smooth journey but there are four and a half weeks left in the season.

"I am just going enjoy the time with these guys and try to play as well as I can."

Shortstop Jose Iglesias left the game in the fourth inning with lower abdominal strain. He will have an MRI in New York on Thursday. "It's not good," Gardenhire said.

...The Tigers are expected to activate left-handed pitcher Blaine Hardy off the disabled list Thursday. He struck out all three batters he faced Wednesday in his second rehab outing at Toledo.