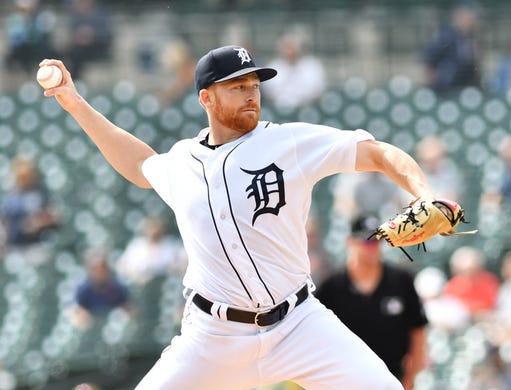 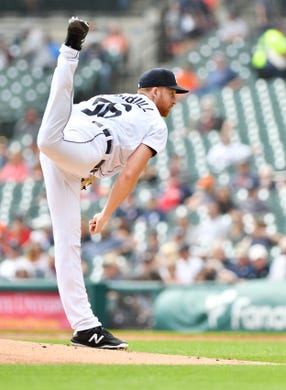 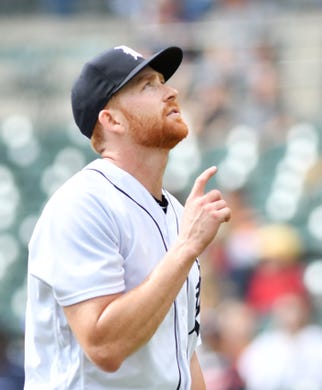 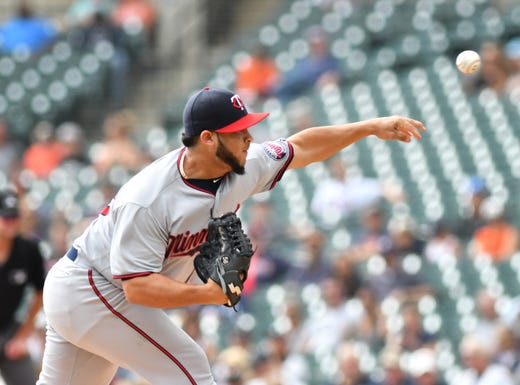 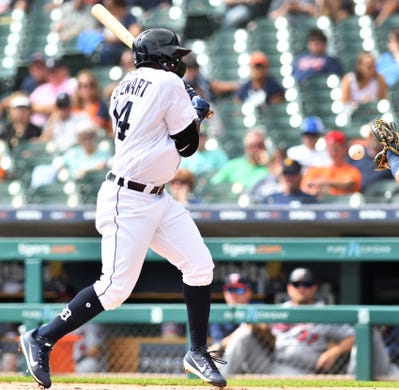 The Tigers' Christin Stewart is hit by a pitch in the first inning. Robin Buckson, Detroit News
Fullscreen 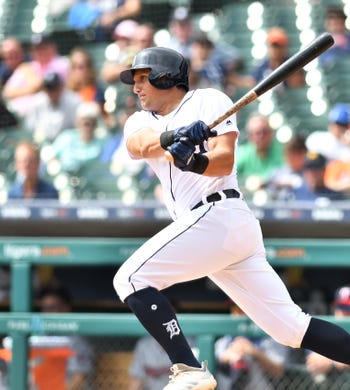 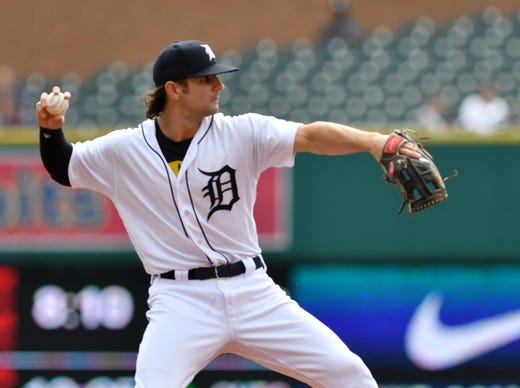 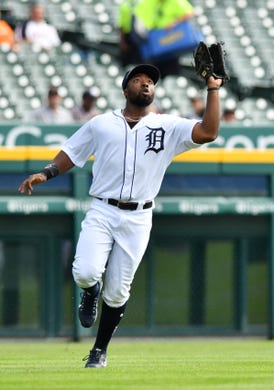 Tigers left fielder Christin Stewart makes a running catch on a fly out off the bat of Twins' Jorge Polanco in the fifth inning. Robin Buckson, Detroit News
Fullscreen 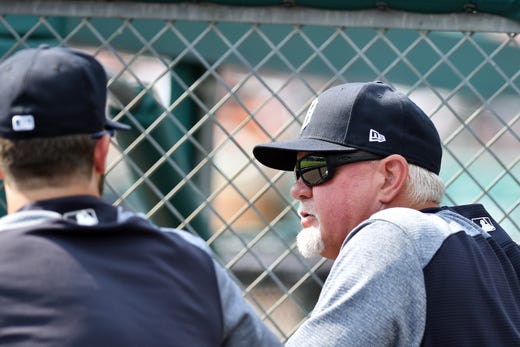 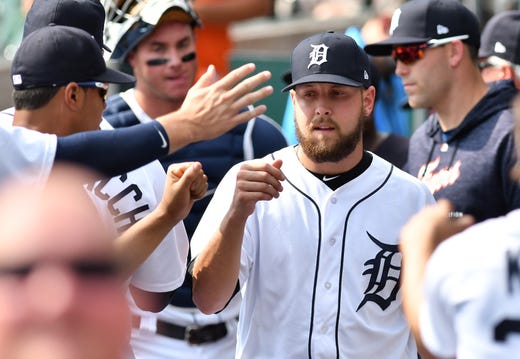 Tigers pitcher Matt Hall is congratulated after he pitches the top of the sixth inning. Robin Buckson, Detroit News
Fullscreen 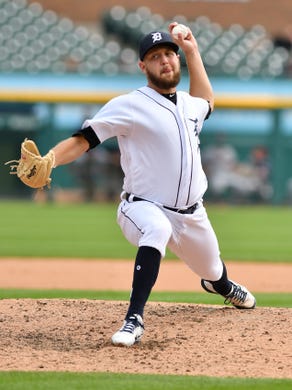 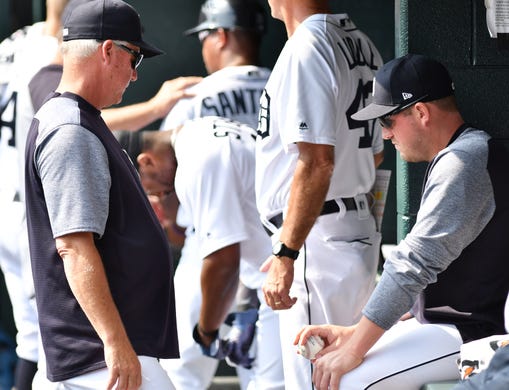 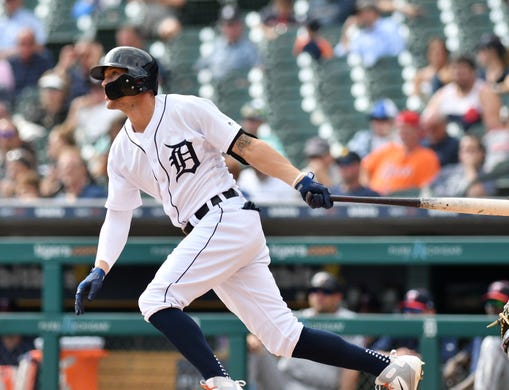 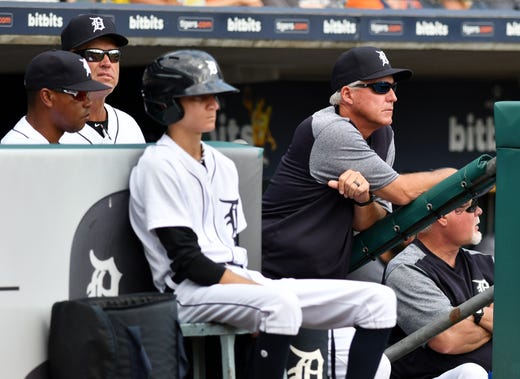 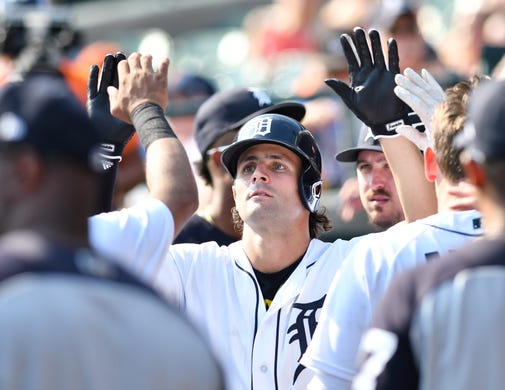 Tigers finally get on the board in the ninth inning after Pete Kozma, shown here, scores on a double by Nicholas Castellanos. Robin Buckson, Detroit News
Fullscreen 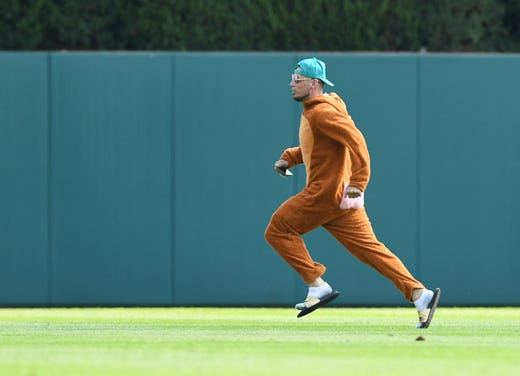 A man runs across the outfield in the ninth inning. Robin Buckson, Detroit News
Fullscreen 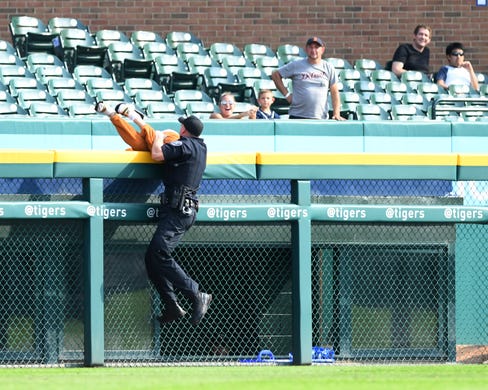 At the visiting bullpen wall, a Detroit police officer catches up with a man who ran onto the field in the ninth inning. Robin Buckson, Detroit News
Fullscreen 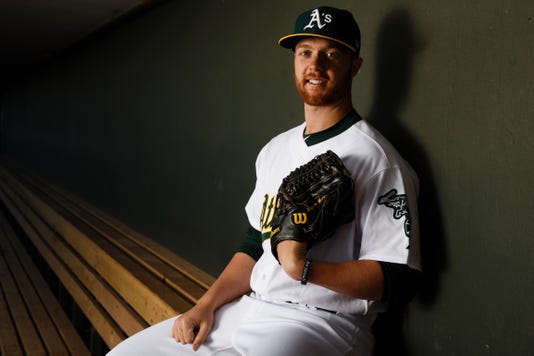 Detroit — They hope, or maybe more accurately dream, for a double-dip return on their Mike Fiers swap with the A's.

But, as with most deals where players to be named later are involved, the Tigers might settle for one, good, productive pitcher among the two they now have secured from the A's following last month's trade that sent Fiers to Oakland.

Logan Shore became the second piece Wednesday when the Tigers nabbed him from a short list of players they had been considering.

Shore is 23, a right-handed starter, and two years ago was a second-round pick by the A's (47th overall) from the University of Florida. He pitched this season at high Single-A Stockton, where he was very good in four starts (1.21 ERA and 0.90 WHIP), and at Double-A Midland, where things didn't go as well in 13 games: 5.50 ERA, 1.51 WHIP.

Shore has a low-90s fastball, a fine change-up, and a primary breaking pitch that needs to evolve if the Tigers are to tap any down-the-road dividends.

They had earlier agreed on a first PTBNL, drop-down reliever Nolan Blackwood, who is expected to start the 2019 season at Double-A Erie and who is being counted on for heavy late-inning work once he gets to Detroit.

The Tigers found little market for Fiers, who has been excellent for the A's since he joined them in early August. Oakland made an August waiver claim on Fiers and offered the Tigers a choice: either accept two players to be named, or retain Fiers, who is arbitration-eligible in 2019 and who won't hit free agency until next autumn.

The Tigers decided there was enough potential among the pitchers to bite.

The Tigers got one player back Wednesday.

But they're still down a pair.

JaCoby Jones returned from a short layoff due to a bruised shoulder and started in center field, getting a single as one of the Tigers' four hits in an 8-2 tumble against the Twins at Comerica Park.

But the Tigers lost another starter, Jeimer Candelario, who had to leave Tuesday's game with a "lumbar spine spasm" and whose back was still stiff Wednesday.

Tigers manager Ron Gardenhire isn't sure when Candelario will be back. Nor is he sure who will patch a sudden rash of infield holes.

Niko Goodrum is gone for a spell with a strained quadriceps, which means Jones, who has played shortstop and third base, could be an option as the Tigers get busy with the Royals for a four-game series at Comerica Park that begins Thursday evening.

Pete Kozma started at shortstop Wednesday for the Tigers, with Ronny Rodriguez working at third base.

He had a bad baptism at Cleveland, mostly because the Tigers decided Matt Hall's first big-league game would be the right time to play some of their worst defense from 2018.

Things were better Wednesday, including Hall's pitching, as he worked 2-2/3 innings, much of which was productive.

He had a 1-2-3 sixth, including a strikeout against the first batter, Tyler Austin. He had another strikeout in a four-batter seventh, which was blemished only by a walk.

A swinging-bunt single set the tone for a rougher eighth, which included a wild pitch and led to a pair of Twins runs.

But his curveball was fine. And, so, for the most part was his fastball.

Hall throws left-handed and has one of the highest spin rates on his curve of any pitcher in professional baseball. He was a sixth-round pick by the Tigers in 2015 from Missouri State after he had led the NCAA in strikeouts.

"Got to work to execute the off-speed stuff better," Hall said after Wednesday's game. "I was throwing strikes and getting some weak contact, but then I gave up the swinging bunt, and the wild pitch, and I left a fastball a bit up in the middle (to Ehire Adrianza). I've got to be better than that."

Gardenhire was a bit gentler in his review.

"A good step for him," Gardenhire said, acknowledging that his Cleveland debut hadn't gone as smoothly. "I'm sure he feels a lot better."