Avila: No guarantee McCann will be re-signed; Tigers still debating plans with Castellanos

Tigers GM Al Avila acknowledged tough and possibly unpopular decisions might have to be made this offseason as he tries to take the organization to the next phase of the rebuilding plan.

Avila: No guarantee McCann will be re-signed; Tigers still debating plans with Castellanos

Milwaukee — Tigers general manager Al Avila acknowledged Saturday that tough and possibly unpopular decisions might have to be made this offseason as he tries to take the organization to the next phase of the rebuilding plan.

Some of those decisions include whether to tender a contract to catcher James McCann, whether to offer a contract extension to right fielder Nick Castellanos and whether to aggressively try to trade starting pitcher Matthew Boyd, who may be one of the more coveted players on the roster.

“We kind of have to look at every option that we have at this point, because as we move forward, we’re looking toward the future more so than 2019,” Avila said before the start of the Tigers-Brewers game. “In saying that, just like last winter, we want to make sure that we were well-represented on the field and possibly have more trade chips if it’s possible.

“These are tough decisions. These are players that are popular, who people like, but at the end of the day, we have to look at the big picture.”

■ McCann, who is arbitration eligible, can be a free agent in 2021.

“McCann has struggled a little bit this year with the bat,” Avila said. “But he’s a veteran guy, he handles the pitching staff great and he’s been durable. Obviously, we wish that he could hit a little bit more.

Avila made it clear no decisions have been made regarding any of the three questions posed here.

“But McCann is one guy that we have to look at and determine, do we bring him back or not,” Avila said.

The consensus is catcher Jake Rogers, whom the Tigers got from Houston in the Justin Verlander trade, is still maybe a full year away, or more, from being big-league ready. Avila was asked if they Tigers would still need a veteran catcher to bridge the gap.

“I think Grayson Greiner’s done a pretty good job,” he said. “And John Hicks before he got hurt, I thought he was doing a good job being that catcher, first baseman, designated hitter. I think what Greiner has shown us here — maybe he will need more work in Triple-A — but right now, I think he’s on the right track.”

The Tigers were in a similar situation with shortstop Jose Iglesias last season and opted to re-sign him (at $6 million) for one season.

“Last year with Iglesias, we made the decision to bring him back and we certainly could do that with McCann, and go that route,” Avila said. “We really haven’t made a decision yet.” 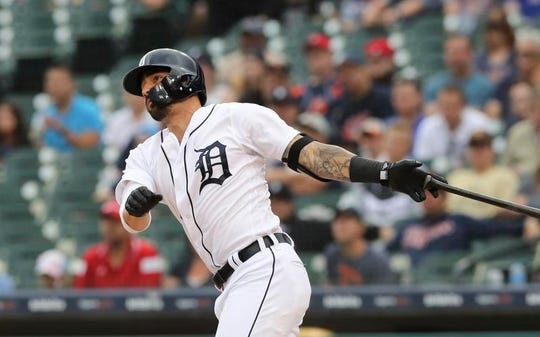 ■ Castellanos, who made $6 million this season, is down to his final year of arbitration. He will be a free agent in 2020.

“He’s going into the same situation J.D.(Martinez) was in not too long ago,” Avila said. “With the exception that after next year there’s the possibility of a qualifying offer (which would net the Tigers a draft pick as compensation for losing him in free agency). And in this case, we are not revenue sharing payers. We should be receivers at that point, and that’ll be a whole different situation.”

The Tigers were paying the luxury tax after the 2015 season when the Tigers signed Martinez to a two-year deal. It wouldn’t be as punitive for the Tigers to sign Castellanos to a longer-term deal ahead of free agency.

“The thing that we have to figure out is, will he be here when we’re ready to contend for the playoffs?” Avila said. “That’s the big question. If you could tell me in the next couple of years we’re going to be a team that’s going to the postseason, then it’d be easy to answer. We’d keep Nick around. He’s a great hitter.

“But right now, we’re trying to assess how that could fit, and if that could fit. It’s a work in progress right now. I can’t say that (long-term extension) will happen this winter, though we aren’t ruling it out 100 percent. We would still have next year to look at that. That’s a question right now that’s hard to answer.”

Avila said the plan for now is for Castellanos to be the Tigers right fielder for 2019, but he’s also left the door open for him to move to first base.

“That would not be a bad idea to see if he could play first base,” Avila said. “I don’t know. You would think he played third, so he might be able to play first. That’s something the coaching staff and Nick have to come to terms with.

“At this time, I wouldn’t want to put any extra pressure on Nick or the coaching staff to say we have to move Nick at this point. Not going to rule it out 100 percent.”

Avila then added this: “We have some outfielders coming (through the system). We don’t have a lot of first basemen coming. It’s something we’ve got to take a look at. But I can’t promise anything at this point.” 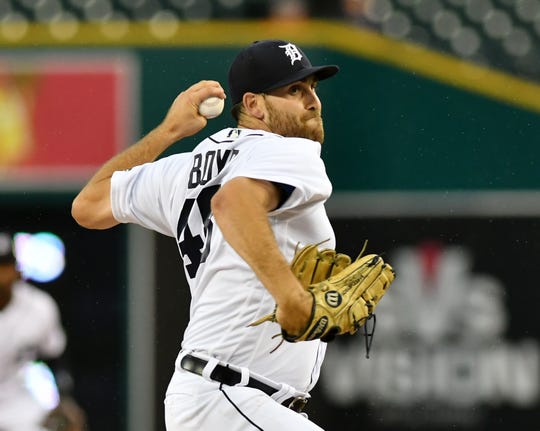 ■ Boyd has established himself as one the top three starting pitchers in the Tigers rotation. He’s also under team control for three more years and is arbitration-eligible for the first time. Over the winter, though, he could be one of the few players on the roster that could bring back a bountiful haul of prospects.

“Sitting here today, you can't make that decision,” Avila said of moving Boyd. “It's as we go along, what comes our way? What's created within another club? That's what we meet about in October with our scouts. Is there another club out there that has an interest in Boyd that can fit one of our needs?

“And if there is, it's a no-brainer. But if there isn't, Matt Boyd is one of our pitchers. And that's the same, really, with everybody on the club. All you're trying to do is make your club better a little bit at a time.”

Avila said one of the items on his winter to-do list is sign a veteran shortstop and/or a second baseman to buy time before shortstop prospects Willi Castro or Sergio Alcantara, or second baseman Dawel Lugo are ready to play full-time roles.

“Niko Goodrum has done a good job and he can certainly fill in at one of the spots,” Avila said. “I know we also like him as a super utility guy. And he’s got power, so you definitely want him in the lineup a lot.

“So if we’re able to find the right fit at shortstop and second base, I would say that would be something that we would be looking at. I don’t know if we’re going to be able to sign both but at least we’ll try to sign one.”

“There will be several players who we will be signing and returning, and there will be a couple of others that will be tough decisions,” Avila said. “We will be finishing those evaluations in early October. We haven’t made a final, 100-percent determination.

“But there is a possibility that not all of them will be coming back.”