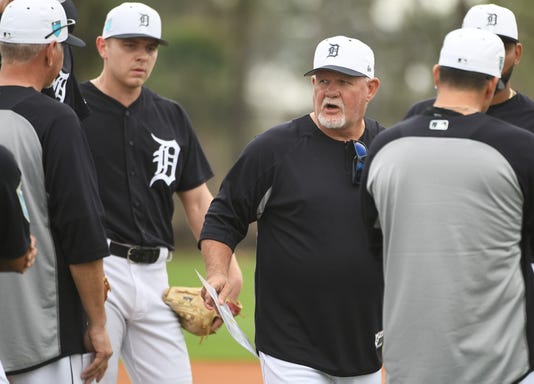 Milwaukee — It may never show up in any historical account of this rebuilding effort by the Tigers, but Oct. 8 could end up being a pivotal date.

On that day, at the club’s Tigertown complex in Lakeland, general manager Al Avila, manager Ron Gardenhire and director of player development David Littlefield will be meeting with the entire minor-league staff.

This will be more than just a routine, season-in-review meeting.

“Our farm director gets it,” Gardenhire said. “David Littlefield understands what needs to be done here. Al has talked about it. Our people have to be better in the minor leagues. They have to be willing to pound these things in or we’re going to find new people.

“He told me that and he’s going to make that point at the meeting. Everybody can be replaced. That’s not the message we want. We just want everybody to get on board with the way we want things taught.”

Eleven players made their big-league debuts in Detroit this season. Eight others were playing in their first full season. Forty-nine different players wore Tigers’ uniform this season, 27 pitchers. And one of the more startling discoveries for Gardenhire was the general unreadiness of many of these younger players.

“You are always going to teach (at the big-league level),” Gardenhire said. “But it’s making them understand what we’re going to do up here so when they get here, they are prepared for it – our routines and what we expect from them.”

It needs to start, Gardenhire said, from the instructional league, through rookie ball and all the way up the chain.

“It’s about our expectations for them to be able to hit a cutoff man,” he said. “If you are a second baseman, know how to feed a ball to second base. Know that we expect you to run a ball out. And it starts down there, so when they get here, there is less teaching.

“You get a more finished product when they get here. They are ready to handle this.”

Gardenhire said the players need to be shown when they sign into this organization that there are consequences for not doing all these little basic things.

“We shouldn’t be yelling at a guy (at the big-league level) for not running a ball out,” he said. “That should be the easiest thing. It takes no talent in the world to do that. It should be handled down there to where they get jerked out of a game when they don’t run a ball out.

“Starting next spring training, if you don’t run a ball out, we’re taking you out. We have a lot of people we can put in. It sounds silly, but it’s the way you’re supposed to play. We want that really pounded into them. We want them to know how we play the game.”

“We need to clean some things up and get better,” Avila said. “It’s something that you start from the rookie leagues on up. To build that winning culture and teach baseball the right way. That Tigers Way of Baseball is a book that’s ever-changing.

“It is renewed every year as we get new ideas and test things out and find out what worked and what doesn’t.”

Gardenhire’s teams in Minnesota were renowned for playing a fundamentally-solid, aggressive style of baseball. But in his final years there, he saw things were beginning to erode.

“They kind of got away from that at the end,” he said. “We started bringing in people from other organizations and the talent pool dried up. We started seeing it again where guys were coming up who didn’t know how to play.”

That happened, in a large part, Gardenhire said, because the Twins best field coordinators – Joe Vavra and Steve Liddle, two of his coaches in Detroit – had been promoted to the big-league team.

“Once they left and other people took over from other organizations, it got a little dicey,” he said.

Thus, the importance of Oct. 8 and getting every coach and every coordinator at every level to buy in to the brand of baseball Gardenhire wants the Tigers to play.

“I’m not Mr. Baseball,” he said. “I don’t have all the answers. But I do know how to respect the game of baseball and how they should go about their business. That’s really important. You have to have that. The Tiger Way.

“When you watch the Tigers teams in the minor leagues, I want people to say, ‘These guys bust their butts. They get after it. They don’t miss cutoff men. They run the bases.’ We had that in that other organization and we can have that here.”