Over and out: First year of Tigers rebuild ends with 64 wins

The most applicable postscript for the Tigers may just be, “Get used to it.” The rebuilding process has just begun.

Over and out: First year of Tigers rebuild ends with 64 wins

Milwaukee Brewers pitcher Gio Gonzalez pitches to the Detroit Tigers during the first inning of an baseball game on Sunday, Sept. 30, 2018, in Milwaukee. The Tigers fell in the season finale, 11-0. Darren Hauck, AP
Fullscreen 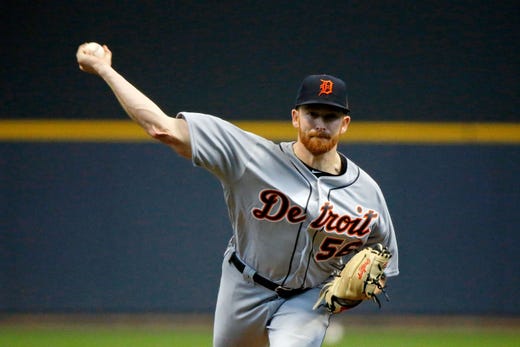 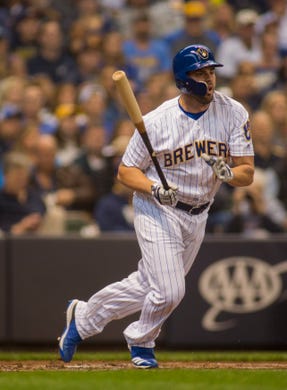 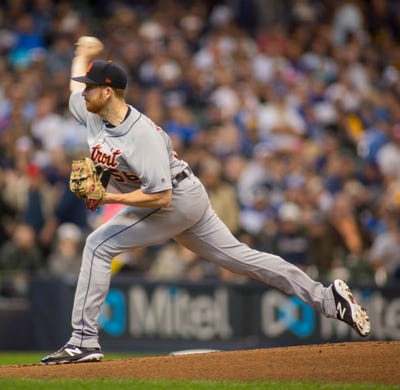 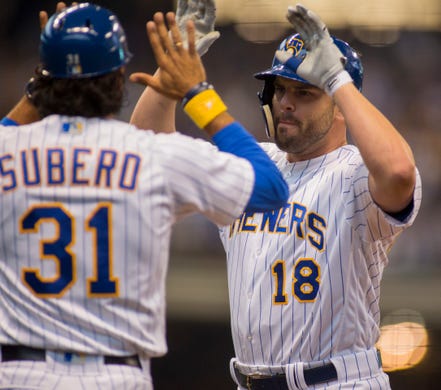 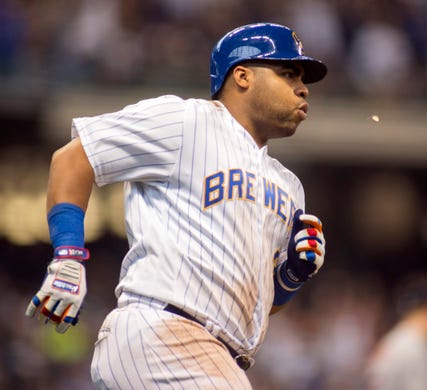 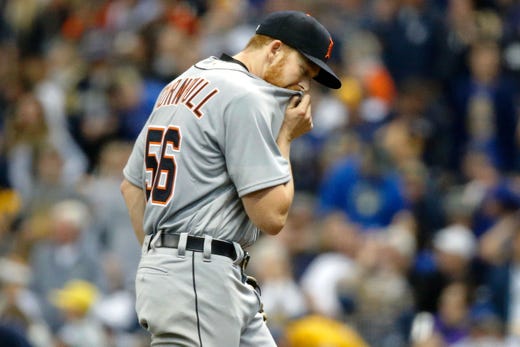 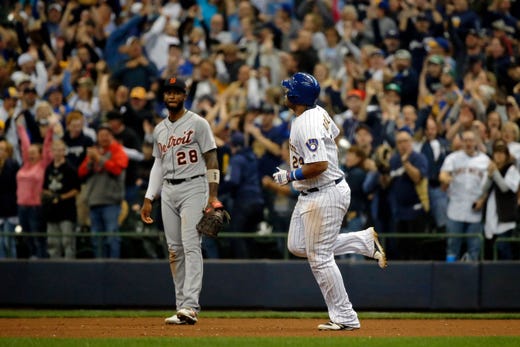 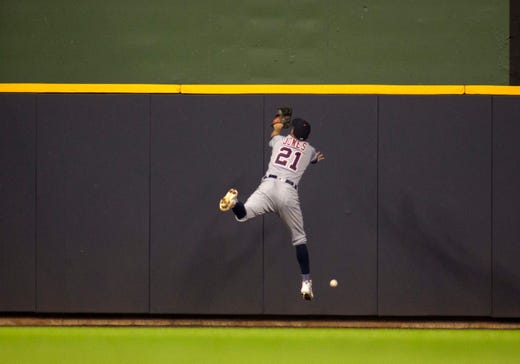 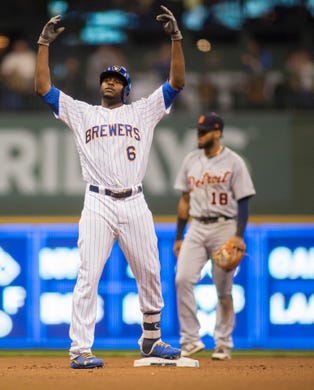 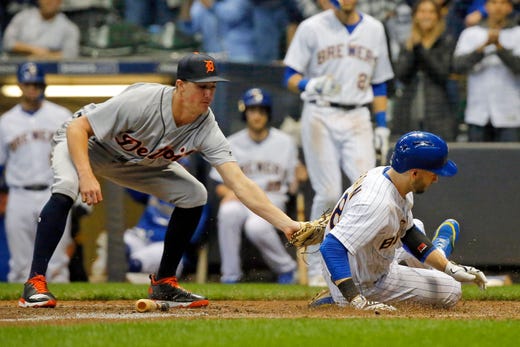 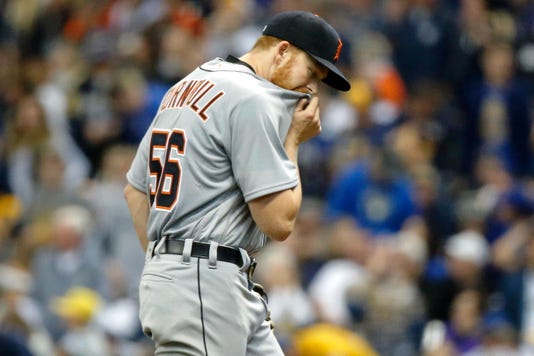 Milwaukee — Quite a juxtaposition, the scene on the field at Miller Park following the Tigers’ 11-0 season-ending loss to the Milwaukee Brewers on Sunday.

As a crowd of nearly 42,000 fans rejoiced, a veteran-laden and ultra-talented Brewers — several of their starters already pulled from the game — were in a calm group mob celebrating their 95-win season, anxious to play the Cubs in Chicago on Monday to settle the National League Central Division title.

Meanwhile, a young band of Tigers, beaten for the 98th time, somberly emptied out of their dugout and prepared to head into another off-season of general uncertainty.

"I'm not the one to say what anyone's memories are of this team," manager Ron Gardenhire said. "It's going to be our fan base that says what they liked or didn't like. I think the hope is that we are doing exactly what we said we were going to do.

"We're going to rebuild this thing starting from ground level. ... As long as we can keep them playing hard and start paying attention to the details of the game, we will be OK."

The most applicable postscript for the Tigers may just be, “Get used to it.” The rebuilding process has just begun.

“The statement is we’re going to get younger,” Gardenhire said. “This is just the beginning. That’s what (general manager Al Avila) told me. That if you think we’re young now, wait till next year.

“That’s the goal. To get all these young kids up here playing. Triple A is going to be full of prospects who are knocking at the door, and that’s a good thing.”

It took the Brewers three years to get back to the playoffs. The Tigers’ process isn’t likely to turn around that quickly.

“It's getting the payroll down and keep on accumulating prospects,” Avila said of the mission this offseason. “There might be guys going from Double A to Triple A who in the near future are going be in the big leagues — and some of the guys that are here now may not be here.

“If you look at this team, you don't say, 'Oh, is that the team that we're going to be winning with two years from now.' No, it's probably going to look a lot different.”

More: Avila: No guarantee McCann will be re-signed

Somehow, this team equaled the win total from the 2017 team (64), a team that had the services of Justin Verlander, Justin Upton, Ian Kinsler and J.D. Martinez for a large chunk of the year. So it wasn’t a catastrophic failure, by any measure.

“I would say from a wins and losses record, no, I don't consider it a successful season,” Avila said. “But then, in your first year of a rebuild, that's not really what you're looking at. What you're looking at is making progress, which I feel we did.”

By progress, Avila meant that the minor league system has been vastly upgraded, from, as he said, the bottom of the barrel to the middle of the pack.

“At the major-league level, we have a team that was very competitive, that very easily could've won a few more games getting a break here and there,” Avila said. “So there's a lot of reasons why you can say we had a successful season other than of course the wins and losses.

“The major-league staff led by Ron Gardenhire did a great job. These guys were motivated throughout the year. I thought we played an exciting brand of baseball…The quality of play was entertaining, to say the least. But we still have a lot of work to do.”

“So many one-run and two-run games,” Gardenhire said. “The season could have been different if we got a big hit here or there, made a couple of better pitches. You can’t take that away from these guys. They believed all year. The record doesn’t indicate how many games we’ve been in and had a chance to win.

“But it’s called a learning process, figuring out how to win these games. A few more quality at-bats, guys getting more experience and adding talent. Nothing beats talent in this game and we need more talent.”

The final score Sunday amplified the distance the Tigers still have to travel to get back to being playoff contenders.

"During a rebuild, you can't look at the wins and losses, you have to look at the other gains," catcher James McCann said. "I've said it before, with the number of close games we've been involved in and you add Miguel Cabrera to our lineup, we'd have a different win-loss record.

"But that's not the situation we were in. It is what it is. It gave a lot of guys an opportunity and you saw a lot of guys step up in big spots."

Certainly Niko Goodrum was one who established himself as a piece of this team's future. He was the everyday second baseman for most of the season, but his value is likely as a super-utility player.

"For a lot of us, me included, we're just figuring out how to be a big-leaguer every day," Goodrum said. "We did a good job. We had good leaders in here to help us. We're just going to go into the off-season working and trying to get better and turn this thing around."

Goodrum finished up on a nine-game hitting streak, hitting .303 in those games.

“It was an individual experience for everybody,” said Nick Castellanos, who fell short of hitting .300 (.298) but led the team with 23 homers and 89 RBIs. “How they took it, how they will learn from it is all dependent on them. The story continues.”

Gardenhire closed the clubhouse at noon Sunday and spoke to the team one final time.

"I told them to be proud that they busted their tails all summer long and never gave up. I am proud of them for that."