Don Kelly leaving Tigers to be Astros’ first base coach

Don Kelly’s pluses as a multi-purpose handyman during the Detroit Tigers’ playoff years helped make him an invaluable, and insightful, big-league scout and coach.

Don Kelly leaving Tigers to be Astros’ first base coach 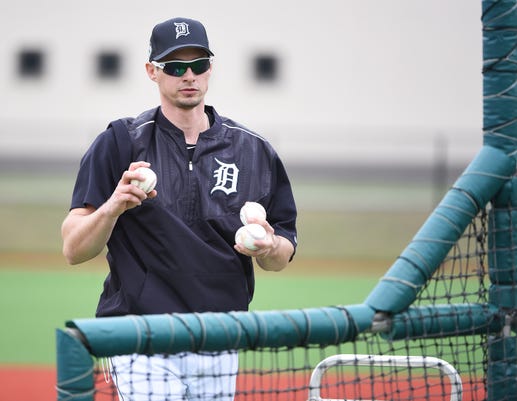 Don Kelly’s pluses as a multi-purpose handyman during the Detroit Tigers’ playoff years helped make him an invaluable, and insightful, big-league scout and coach for the team after he joined them following his playing days.

Other teams had noticed.

The Astros were preparing to announce late Wednesday that Kelly, 38, will become manager A.J. Hinch’s new first base coach.

“Detroit’s a second home to us, but this was too good,” Kelly said Wednesday, after notifying the Tigers he would be leaving for Houston.

Kelly will replace Rich Dauer, 66, who 13 months ago had emergency surgery for a subdural hematoma.

More: When will the Detroit Tigers contend again? Here's one possible timeline

Kelly in 2001 was an eighth-round pick by the Tigers out of Point Park University, in Pittsburgh, not far from his hometown of Mount Lebanon.

He was a shortstop and first baseman with a left-handed bat minus the power to qualify as serious big-league material. But he became a weight-room fiend and developed sufficient muscle to rank as a hitter who had to be respected, one who also had the manager-pleasing ability to play any position on the field. He even filled in as an emergency pitcher during one Tigers appearance in 2011.

Although the Pirates later signed him as a minor-league free agent, he returned to the Tigers in 2007 and played six seasons for manager Jim Leyland. He also hit a big leadoff homer in Game 5 of the 2011 divisional series against the Yankees as the Tigers won, 3-2, and headed for the ALCS.

Kelly was a two-time winner of the Bill MacAdam Tenth Man Award, presented by the Detroit Baseball Society to a premier Tigers player who was not a regular.

Kelly was a clubhouse prince during his Tigers years, popular with teammates and with Leyland and his coaching staff. His relationship with the team, as well as his baseball intellect, made him a natural to join the Tigers as a player-development coach and scout, which he did in February 2017.

Kelly left the Tigers following the 2014 season and wrapped up his playing career with the Marlins during the 2015-16 seasons.