10 players the Tigers could take at No. 5 overall in 2019 Major League Baseball draft

Hitters abound, and it's a hitter the Tigers will prefer as the 2019 draft crop begins to take shape among America's prep and college stars.

10 players the Tigers could take at No. 5 overall in 2019 Major League Baseball draft 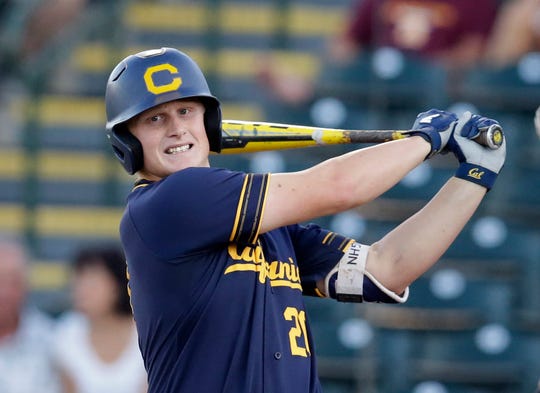 California first baseman Andrew Vaughn could be an option for the Tigers, who own the No. 5 pick in the 2019 MLB draft. (Photo: Rick Scuteri, Associated Press)

On the plus side for the Tigers as they stare at another juicy draft spot in 2019, there is a lush baseball orchard loaded with college and prep hitters who might meet a team’s general preference for a game-busting bat when Detroit chooses with its No. 5 pick.

That wasn’t the case a year ago when the Tigers picked first. They wanted a franchise slugger, desperately so, but decided the only player who qualified as the kind of talent you take at 1-1 was Auburn pitcher Casey Mize.

This year looks different. Or as different as sandlot talent can appear in January, weeks before the Sunbelt college and prep seasons begin.

Already, it looks as if Oregon State catcher Adley Rutschman could be a coast-to-coast pick as this year’s top overall talent.

The Orioles consolation for a miserable 2018 season is a booby prize on par with what the Tigers enjoyed (endured) in the last draft. They get first crack in June and could go with Rutschman, who is thought in January of 2019 to be more skilled than Matt Wieters, a catcher the Orioles took fifth overall in 2007. Or, they could opt for a player who even last summer looked as if he’d be bagging 1-1 cash in 2019: Texas prep shortstop Bobby Witt, Jr.

Then it gets truly interesting, at least for the Tigers.

Kansas City is next, thanks to the Royals' success at losing to everyone, it seemed, but the Tigers, while the White Sox — whom the Tigers insisted on whipping in 12 of 19 games — get that No. 3 overall shot and could go any which way.

Miami then will take its bruise-fueled turn. And then come the Tigers, who easily could choose among the following 10 gents, all of whom are position players, and many of whom today finish ahead of any pitcher in assorted early 2019 draft forecasts:

►1. Rutschman, C, Oregon State, 6-foot-2, 216, switch-hitter: He’s your basic all-tool catching god with an arm manufactured by some weapons contractor and with categorically sensational skills. Good-hitting catchers often are viewed with a kind of sacred awe. Rutschman is genuinely exceptional and today would be regarded as an instant Orioles grab at 1-1. 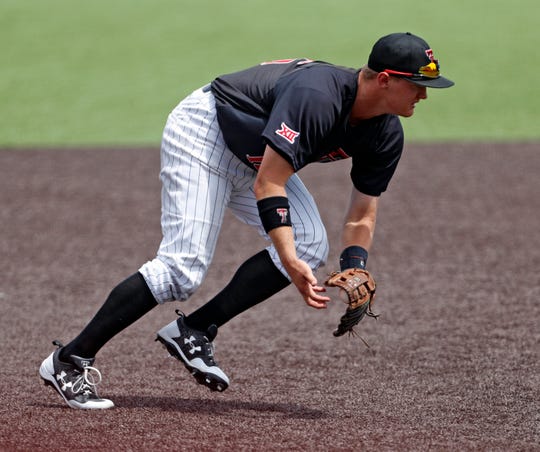 ►3. Josh Jung, 3B, Texas Tech, 6-2, 215, RH batter: He might be a bit thick for third base, but any team drafting Jung isn’t as interested in his eventual position as they are in his potential big-league bat. He is a deadly hitter with power that’s evolving. The White Sox, who have that third turn in June, are paying attention.

►4. Kameron Misner, OF-1B, Missouri, 6-4, 210, left-handed batter: It won’t be headline news if Misner moves ahead a slot or two or three. When you hit all the notes — speed, power, batting average, glove, arm, etc. — and you carry his size with a left-handed bat, and can play three outfield positions, that’s a handy artist to have in your inventory. Misner’s a jewel who might be at that top spot had he not been socked last year with a stress fracture in his foot.

►5. Andrew Vaughn, 1B, Cal, 6-0, 214, RH batter: You wonder if the White Sox might see in Vaughn a replica of their golden oldie, Paul Konerko. Vaughn has the muscle and hard-contact habits Konerko had. He bats from the same side of the plate. He isn’t as big as that old goateed Tigers-killer, but he can sting a pitch. Keep at least one eye on Vaughn as the Pac-12 season unfurls.

►6. Shea Langeliers, C, Baylor, 6-foot, 190, RH batter:  Were it not for a guy named Rutschman, here would rest America’s top amateur catcher in the winter of 2019. He doesn’t carry, just yet, an All-Star bat as scouts look a few years down the road. But he has power, and the rest of his game is first row. If he shows a bit more crunch at the plate during his spring rehearsals, Langeliers could be scooped quickly.

►7. Matt Wallner, OF, Southern Mississippi, 6-5, 220, LH batter: This is one of those risk-reward stocks as a new season arrives. It isn’t that Wallner lacks any physical necessities. He’s talented enough to pitch or to play the outfield. The question is whether he will show enough substance at the plate to hit for a pleasing average and refrain from strikeouts that have some scouts nervous. He could also turn into a February-to-June locomotive. Scouts, and draft fans, will be monitoring. 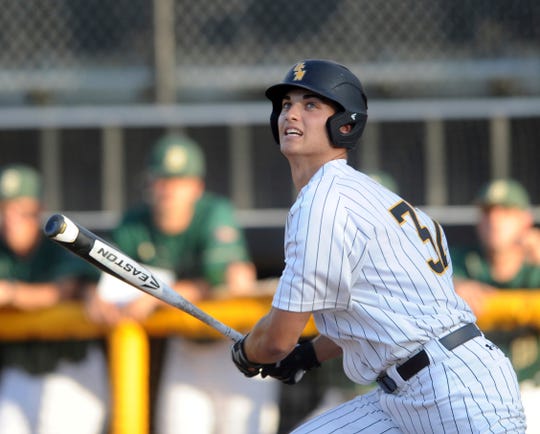 ►8. J.J. Bleday, OF, Vanderbilt, 6-3, 205, LH batter: Commit this man to memory. He’s a Vandy guy, which never hurts, given the school’s knack for delivering high-horsepower big-league talent. He also has a lovely left-handed swing with growing power. That he plays right field with style makes him likely Top 10 material, even in January.

►9. Riley Greene, OF, Hagerty (Fla.) High, 6-2, 190, LH batter:  Ranks today as the best high-school hitter in America, which should beget the kind of June draft spot and offer that wipes away his University of Florida scholarship. Depends, per usual, how a prep’s spring shapes up. The Tigers will be taking notes.

►10. Corbin Carroll, OF, Lakeside High, Seattle, 5-10, 160, LH batter: Not a lot of 5-10 players find their way onto Top 10 lists, but Carroll is such a gifted center fielder with power beyond his size that teams will be wondering whether he should carry on at UCLA, where he earlier committed, or head straight to the bushes for grooming that might make him a farm-system center piece.

That’s an early batting order for how a draft rich in batters looks 4½ months before Commissioner Rob Manfred has tucked into his hands official word from Detroit on who it’s taking as a very important part of a very important rebuild.

First-round draft picks by the Tigers the last 10 years: