Norris has had trouble staying healthy since joining the Tigers organization in 2015, throwing only 44 1/3 innings last season after groin surgery.

Tigers pitcher Daniel Norris met with the media over the weekend during the Tigers Winter Caravan and TigerFest. The Detroit News 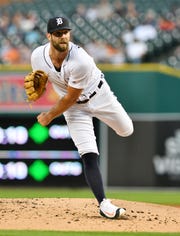 Pitcher Daniel Norris has struggled to stay healthy since his move to the Tigers organization in 2015. (Photo: Robin Buckson, Detroit News)

Detroit — Daniel Norris was in a laughing, smiling mood Saturday at TigerFest, even participating in a fun Bad Jokes Challenge with fellow pitcher Matt Boyd. The rules: Whoever laughs most, loses.

"Did you know I used to hate facial hair?" Norris deadpanned.

Boyd cracked up, even before the punch line was delivered, given Norris is sporting a wildly bushy beard.

Now, laughs haven't been the easiest to come by lately for Norris, a former second-round pick of the Toronto Blue Jays who figured he'd be an established major-league pitcher right now — and not someone entering spring training on the outside looking in at a rotation spot.

But a series of setbacks over the last several seasons — from surgery to remove bone spurs from his elbow in October 2014, to surgery to remove a cancerous growth in his throat in October 2015 (he's now cancer-free) to groin surgery last spring that limited him to just 44.1 innings for the Tigers in 2018 — it's been a patience-testing journey.

And last year was easily the worst of it.

"But I'm not going to lie, it was very frustrating, just because I wanted so badly to be healthy and to pitch, and frankly it wasn't happening."

.@mattboyd48 and @DanielNorris18 tried to make each other laugh in the Bad Jokes Challenge at #TigerFest.

We would have lost about a minute into this. pic.twitter.com/v54vZg042e

When Norris was acquired in a July 2015 trade with the Blue Jays — the Tigers got Norris and Boyd for David Price — Norris came with the higher expectations, though has steadily been passed by Boyd, who might just be considered the ace of Detroit's staff right now.

That's not to say Boyd has the better stuff. It's good, but he's also stayed healthy, and thus developed into a solid major-league starter.

Norris has the arm to be a major-league ace — in the minors, he's been more than a strikeout-per-inning pitcher, and in a couple shortened major-league seasons with Tigers, he's eclipsed that benchmark, too — but you've gotta be on the field to do it. Obviously.

"He's not a fully established pitcher yet," general manager Al Avila said. "His injuries have kept him from, quite frankly, developing.

"There's still some time there, but he needs to stay healthy."

Avila's right. Time is still somewhat on Norris' side. He's only 25, and isn't 26 until late April. That said, he's arbitration-eligible for the first time next season, and a free agent two years after that. At some point, the Tigers will have to determine if the rising cost and and Norris' health align to consider a long-term investment.

Detroit also has a number of highly acclaimed pitchers rising through the minors, and some could start finding their way to Comerica Park this fall.

Given the Tigers have Boyd, Michael Fulmer, Jordan Zimmerman and free-agent pickups Tyson Ross and Matt Moore in the mix for the 2019 rotation, it's on Norris to not just stay healthy, but perform and win a spot in the rotation.

"It's all on his shoulders," manager Ron Gardenhire said. "It's not on anybody else's but his.

"We know he has stuff ... he can get major-league hitters out, but you have to be able to do it on a consistent basis, and every fifth day."

Norris is optimistic his time is finally coming, especially after a promising offseason that included game action — he made starts in the Dominican, then pitched in relief for a United States team of major-leaguers that played a two-week run in Japan — and a productive workout regimen, some in Lakeland, most in California, that included Yoga and Taekwondo, and training time with MMA fighter Keith Olson. Unlike the previous offseason, which centered on groin-strengthening (he hurt it originally in 2017), this winter he was able to focus in general teams, just on getting stronger and more athletic.

What the offseason didn't include, though, was much if any time off, which is fine with Norris, given all the time off he had during the season in 2018.

After spring groin surgery, he went through a 12-week recovery and rehab program that also included setbacks, including ripped scar tissue and calf strains.

It was quite the test for a guy who admits he's not the most patient person.

"But I think I've been forced to be patient in my career," Norris said. "I've learned to be patient, trust God's plan and just feel OK with where I'm at and also just force myself to get past whatever it is.