Nine years after nearly drafting him as a pitcher, Tigers giving Cowart a chance make club as a two-way player 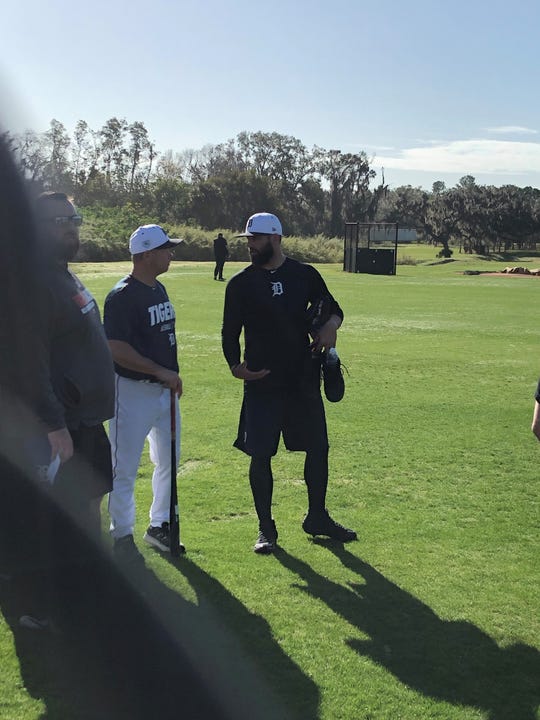 Kaleb Cowart, right, is a right-hander who has a mid-90s fastball. (Photo: Chris McCosky, Detroit News)

Lakeland, Fla. — When Anthony Gose decided a couple of years ago to give pitching a try, that was more an act of desperation by a strong-armed outfielder who had completely lost his way as a hitter.

Matt Bush was a five-tool shortstop when the Padres drafted him out of high school. When he was transitioned to pitcher, it was because he could throw the ball 100 mph.

Kaleb Cowart’s situation falls somewhere in between those two cases.

“He wasn’t just like Matt Bush in high school where he just threw hard,” said Tigers assistant general manager David Chadd. “This kid could actually pitch. He had a feel for pitching.”

When Cowart was coming out of high school in Georgia, scouts were split on whether his future was as a pitcher or position player. The Tigers, Chadd being heavily involved in scouting him, liked him as a pitcher.

"He was extremely athletic, obviously," Chadd said. "His fastball was 92-95 with heavy life and a slider he threw for strikes. He also threw a split-fingered fastball in high school, and that was rare to see.

"He wasn't a position player trying to pitch. He had feel with all his pitches and control. I liked him a lot back then."

So here we are, nine years later, and the Tigers are finally going to get the chance to see if Cowart, who spent parts of the last four years as a utility player for the Angels, can not only pitch in the big leagues, but be a two-way player.

“This kind of opportunity wasn’t around until Shohei (Ohtani) came over (from Japan) last year and kind of opened the door for some guys who are able to do it,” Cowart said after a light workout Monday. “Any time you can make yourself more versatile on the field, you’ve got a better chance. GMs like that and front offices like it — just the roster flexibility is huge.”

Cowart, whose major-league slash line is a pitcher-ish .177/.241/.293, asked the Angels if he could transition to pitcher at the end of last season. They agreed but ended up putting him on waivers. The Mariners signed him, also with the intent of using him as a two-way player. But after making a few trades, they had to take him off their 40-man roster.

The Tigers quickly claimed him and brought him to Lakeland last month to watch him throw.

“He looked good,” Chadd said. “He was about 80 percent and he was still throwing 91-93 mph. His mechanics looked good. His arm works. We’ll see.”

Pitching has always been in the back of Cowart’s mind. But seeing first-hand how Ohtani handled it, coupled with his struggles as a hitter, pushed the notion to the front of his mind.

“It was pretty much a split decision on the teams that were looking at me (coming out of high school),” Cowart said. “Half of them wanted me to play and half wanted me to pitch. It was ultimately my decision.

“I wanted to play (a position) first, and I knew I could always pitch if I needed to. I always wanted to play; I wanted to hit a homer before I struck somebody out. It’s funny the way the game works and it comes back full circle.”

He began his throwing program on Nov. 1 and has already thrown several bullpen sessions. He will throw another, this one in front of pitching coach Rick Anderson, on Tuesday.

“Everything feels pretty good,” he said. “The test is obviously going to be facing live hitters. But it feels good off the mound. The arm is feeling good.”

Cowart is out of minor-league options, so he’s going to have to make the club out of spring training. He’s not cleared waivers twice already, so it’s not likely he would clear them a third time, either. And competition is stiff both in the bullpen and at the utility positions.

“I’m excited for the opportunity,” Cowart said. “It was very gracious of the Tigers to let me do this. I am just going out and try to win a job.”