Casey Mize says he using technology to reshape his pitches. 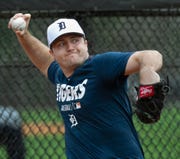 Lakeland, Fla. — The scene Tuesday on a rare cloud-covered morning at TigerTown.

His gray T-shirt soaked with sweat, Michael Fulmer trudged from his 35-pitch bullpen session over to one of the back fields where for about 20 minutes he fielded bunts and slow rollers — testing his mobility and agility with a black brace protecting his surgically-repaired right knee.

“He’s looked awesome,” pitching coach Rick Anderson said. “I’m ecstatic about it. I ask the trainers as soon as I come in, ‘any limitations?’ None. He’s great. He’s fine.”

Daniel Norris, his mountain-man beard still in full for at least another day, was popping catcher Grayson Greiner’s glove with heavy fastballs, sending the dials on the Rapsodo pitch analyzer spinning and getting occasional “atta boys” from Anderson and head athletic trainer Doug Teter.

Catcher John Hicks was all set to receive a pitch from infielder-pitcher Kaleb Cowart just above his left shin guard, when suddenly the ball dipped and slid. He ended up making an awkward-looking backhand stab of the pitch. “That,” he said with a sheepish grin, “was nasty.”

On the artificial-turf field behind the bullpens, a large group of position players — primarily outfielders — were taking batting practice and shagging balls. Mikie Mahtook, JaCoby Jones, Christin Stewart, Victor Reyes were among them.

Jones and Reyes broke off and went over to another field to run sprints.

The pitchers who were not throwing Tuesday worked with the strength coaches — even throwing the football around a little bit. Closer Shane Greene drew cheers from his teammates with a deft, lunging catch just before hitting the fence.

“That’s the best catch you will make all year,” a teammate said.

With all that was going on Tuesday, and all last week, it is hard to believe the first official workout for pitchers and catchers isn't until Wednesday.

“There’s a lot of good arms out here,” Anderson said, just before running to another back field to throw batting practice to another group of position players who don’t have to report until next week. “These guys are all eager. I mean, you see it. They’ve been out here for over a week.”

Of special interest Tuesday was the bullpen session of a certain right-hander whom the Tigers took with the first pick of the draft last year. Anderson, the Tigers roving pitching coordinator A.J. Sager and several of the Tigers veteran pitchers were standing or seated behind the bullpen mounds watching intently as Casey Mize threw about 30 pitches.

“I come in early and he’s one of the first ones here,” Anderson said. “He’s working his butt off. Yesterday I talked to him and I told him, ‘You are going to lead by example, by what you do.’ You watch him work and he gets after it. He is focused and driven, and then you see him throw off the mound and that’s even a bigger bonus.”

There were video machines behind the plate and Rapsodo machines between the mound and the plate at each station Tuesday, measuring and collecting data on everything from velocity, spin rate, spin efficiency, pitch shape, ball flight, even 3D trajectory.

Mize, for one, is a huge believer in this technology. In fact, it led him to change the shape and grip of his slider.

“It’s the most efficient way to develop a pitch,” he said. “The numbers are right there in front of you. You can see the flight of the ball, the path of the ball. You know how it’s playing off your other pitches. With the slow-motion cameras, you can see the last thing the ball touches out of my hand.”

Mize, after studying the spin axis and release of his slider and comparing the data to others who have had success with the pitch, he determined it would better for him to use more of a sweeping slider, more of a curve-slider hybrid, than what he had been throwing.

“These guys up here have really good breaking balls and really good fastballs,” said Mize, whose repertoire also includes a four-seamer, two-seamer, cutter and splitter. “You start looking at all the numbers and it just makes sense. The numbers don’t lie. If a guy has a really good curve ball, he’s spinning the crap out of it.

“And a guy with a good fastball, he’s either sinking it with lower spin rate, or he’s riding it with higher spin rate. This is stuff I have really bought into.”

That’s fine with Anderson, who has said he doesn’t plan to tinker at all with Mize this spring. He wants him just to get acclimated. His success or failure against professional hitters will dictate what adjustment he’ll need to make.

“The spin rate and all that, that’s fine,” Anderson said. “But just watching him, you can see when the ball is coming off the side of hand and the spin is different. These are things we’ve been teaching, but now they can look at it more visually.

“Some guys are into it more than others. Tyson Ross is big into analytics. Jordan Zimmermann, he doesn’t want to hear about it. He just says, ‘I know I need to hit that spot right there.’”

Anderson took one long look at Norris’ taekwondo training video at Tigerfest last month and knew right then, his talented but snake-bitten lefty might be back to form.

“He was kicking it high and powerfully,” Anderson said. “Power for pitcher and a hitter comes from his core. He told me this is the best he’s felt in forever and I told him it was the first time he’s had flexibility and strength in your lower half. 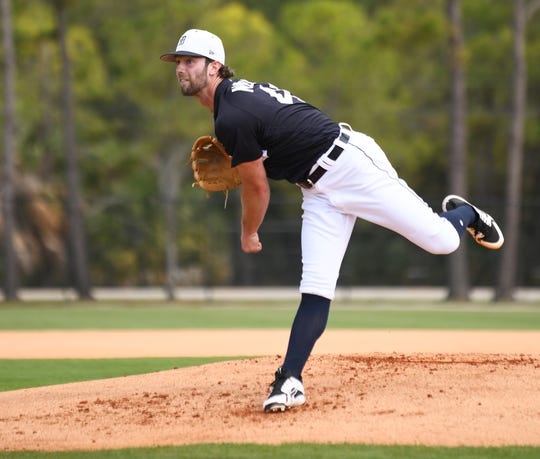 “Watching his workout, I said, ‘You are going to have a heck of a year, young man.’ It’s all flowing together now instead of him having to force it and being restricted.”

The Tigers didn’t share any of the velocity readings from Tuesday’s sessions, but it was clear to the naked eye that there was life on Norris’ pitches.

“What was frustrating to me last year, we’d do some mechanical things in the pen and be like, ‘Wow, there it is,’” Anderson said. “And he’d say he just doesn’t feel it. Now, he’s feeling great with everything.”

As it stands entering camp, Norris is expected to battle veteran lefty Matt Moore for the final spot in the Tigers rotation. Moore, who has been working out here since last week, left the team to be with his wife, who was giving birth to their first child.

“I am anxious to sit down with him (Moore) and just talk to him about things, about where we’re going here,” Anderson said. “One with the him and Tyson Ross (the other veteran free agent starter the Tigers signed in the off-season), you’ve got make-up through the roof.”

“Both of those guys are make-up guys,” he said. “They work hard. And if you got that, you’ve got something to work with.”

Funny to say after all the hours already logged on these back fields, but the official work for pitcher and catchers starts now.