Casey Mize met catcher Jake Rogers between the mound and home plate in the fourth inning Friday of the Tigers' 13-2 win in a Grapefruit League tune-up game against Lakeland’s Southeastern University. 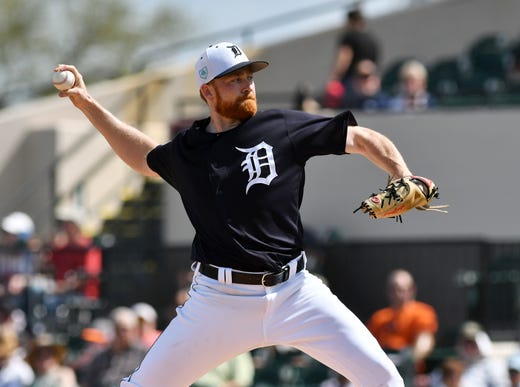 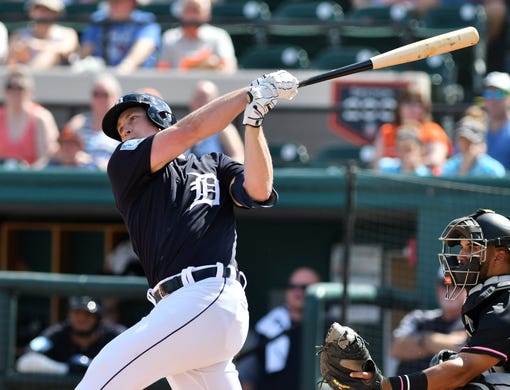 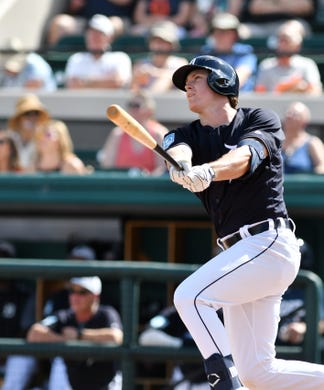 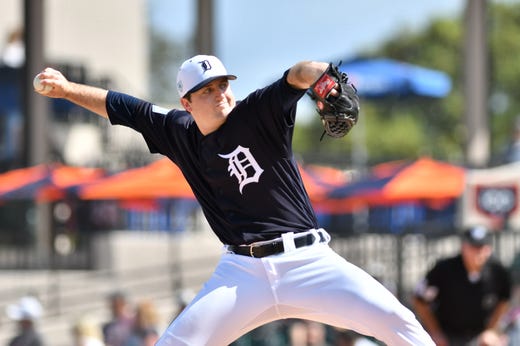 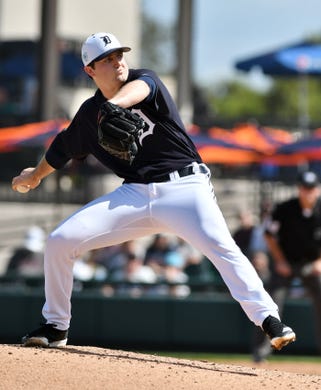 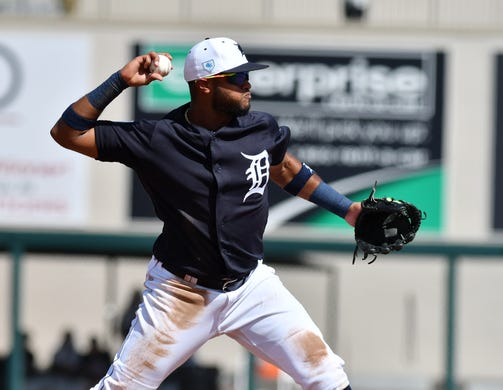 A fan is poised to catch the home run ball off the bat of Tigers' Jake Rogers in the third inning. Robin Buckson, Detroit News
Fullscreen 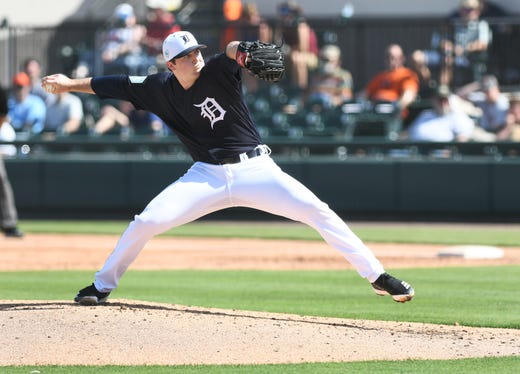 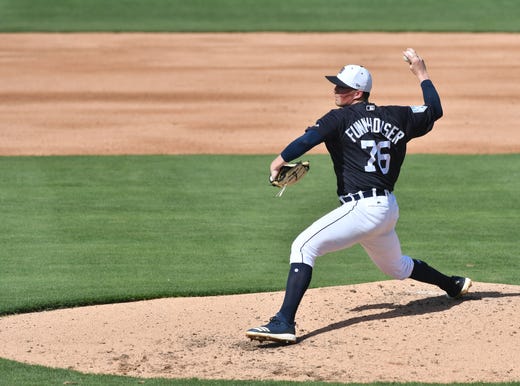 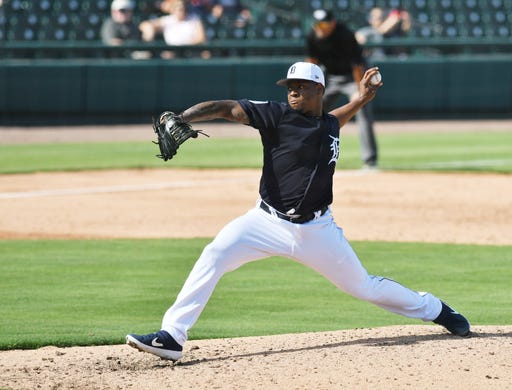 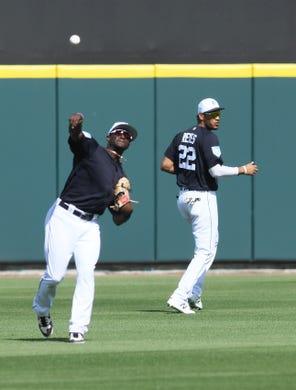 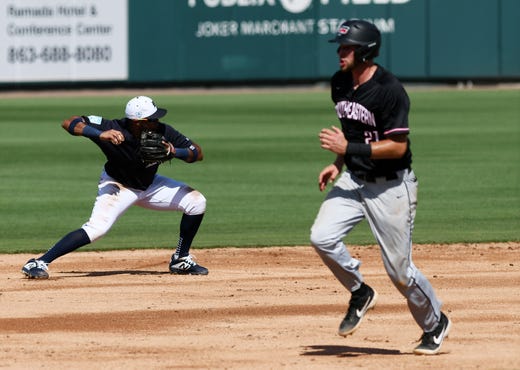 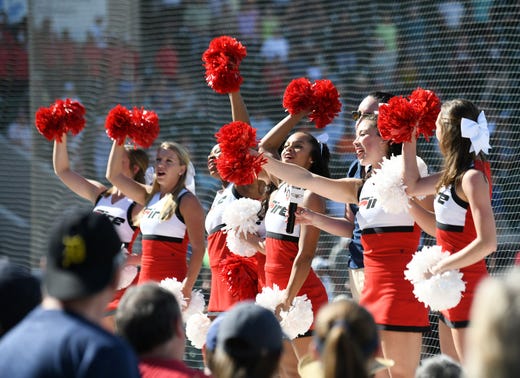 Southeastern University cheerleaders help lead the fans in singing 'Take me out to the ballgame' during the seventh inning stretch. Robin Buckson, Detroit News
Fullscreen 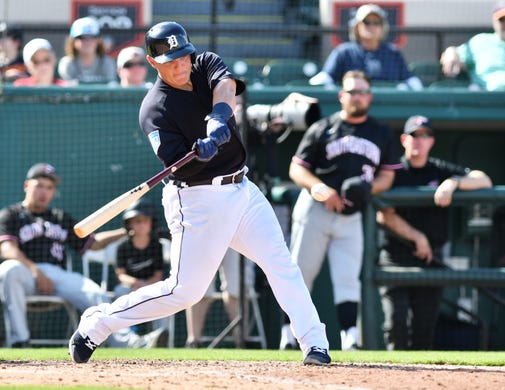 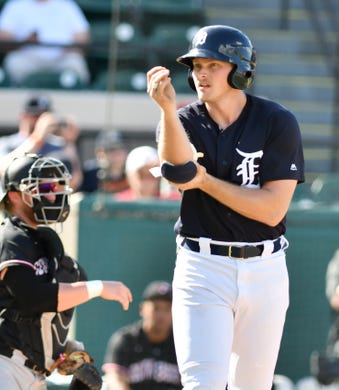 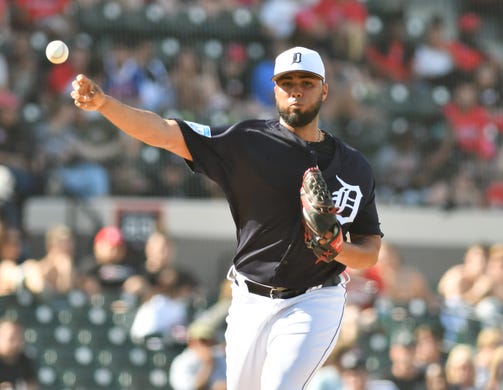 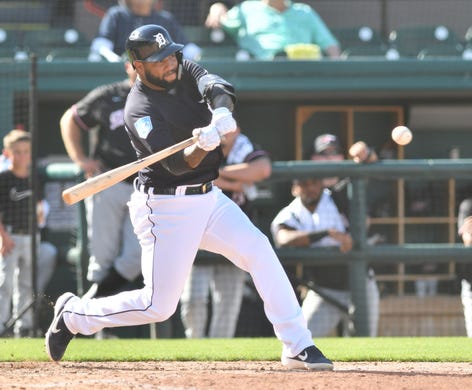 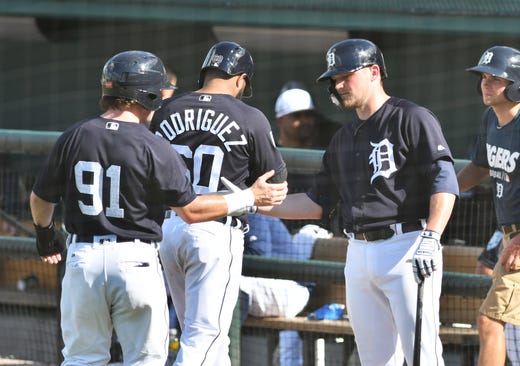 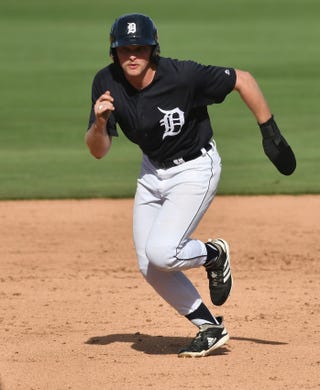 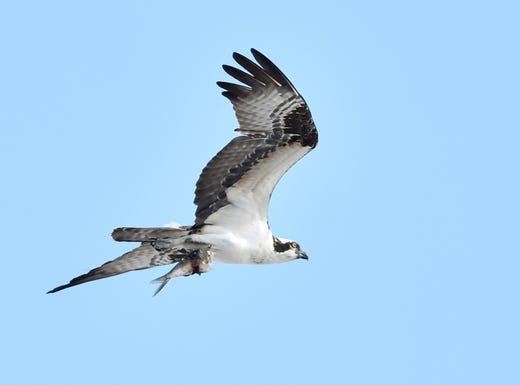 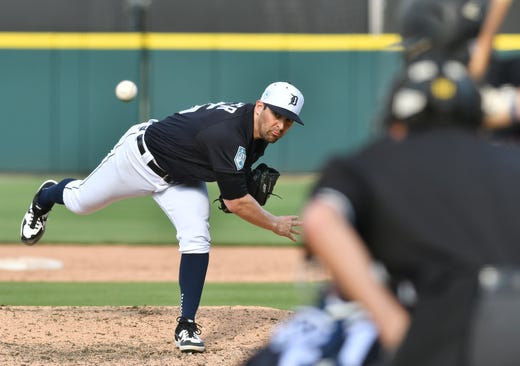 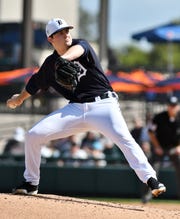 Lakeland, Fla. – Casey Mize met catcher Jake Rogers between the mound and home plate in the fourth inning Friday of the Tigers' 13-2 win in a Grapefruit League tune-up game against Lakeland’s Southeastern University.

Mize had retired the first five batters he faced on just 19 pitches. His fastball was steady at 94-96 mph, even hitting 97 according to the unreliable stadium gun at Publix Field. He’d thrown all his secondary pitches for strikes.

It was shaping up to be an easy-breezy exhibition debut for the Tigers' No. 1 overall pick.

“I told Jake, ‘Hey, we checked both of our boxes.’ Then I gave up three straight hits.”

It was a usable teaching moment for Mize. His issues came once he had to work from the stretch.

“Working out of the stretch is going to be a focus for me,” he said. “It’s something I changed over the offseason and it’s going to take some time.”

At Auburn, Mize took a wide stance when he worked out of the stretch. That forced him to use a shorter leg kick, so he could cut down on his delivery time to the plate. It also took away some of his momentum to the plate.

“I’ve brought my feet closer together,” he said. “I am still pre-setting my hips. But I have a higher leg kick than I had at Auburn. Obviously, there are better catchers here and they have more time to throw runners out.

“That allows me to get more of a leg kick out of the stretch, and more momentum. But it’s going to take some time.”

He threw 14 strikes in his first 19 pitches in the wind up. His pitches were sharp. From the stretch, he gave up the three hits, fell behind two batters and needed 13 pitches to get the last out.

“I’ve been working on it, but today was a reminder that I have to work harder,” Mize said. “I am going to talk to Andy (pitching coach Rick Anderson). Most of my bullpens from here on out will be from the stretch.

“But this is good. It shows me what I need to work on. I am going to attack this.” 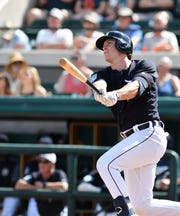 This marked the first time since 1998 the Tigers played their spring tune-up game against somebody other than Florida Southern (scheduling conflict). And against Southeastern, the defending NAIA champs, the Tigers mostly fought kids with kids.

None of their projected starters were in the game or on the bench, spending the morning getting their work in on the back fields.

Instead, manager Ron Gardenhire gave the crowd at Publix Field a steady parade of the club’s top prospects.

Brandon Dixon, claimed off waivers from the Reds and trying to win a utility job, and top catcher prospect Jake Rogers hit solo home runs early in the game. Catcher Kade Scivicque doubled in the seventh to break a 2-2 tie.

Daniel Pinero, a third baseman called over from minor league camp, hit the longest home run of the day. His shot in the eighth nearly cleared the berm in left center and triggered a 10-run inning.

"We should play seven innings," Gardenhire said when asked what his takeaway was from the game. "Seven innings would be way better in an exhibition game like this."

Sights and sounds of spring training captured over a few days and published Feb. 21 The Detroit News

Catcher Brady Policelli contributed a two-run triple and Cam Gibson, also called over from minor-league camp, had an RBI double. Southeastern never recorded the third out in the inning. Gardenhire basically just pulled his runners off the bases and moved the game ahead to the top of the ninth.

Right-hander Spencer Turnbull, in a fight for the final rotation spot, started in the ultimate no-win situation. He’s supposed to dominate a college team and if he doesn’t, oh the humanity.

Turnbull did what he was supposed to do. He pitched two crisps inning, 19 pitches, 15 strikes, to six hitters. He allowed a hit on the first pitch of the game – by Manuel Mesa – who was thrown out trying to steal third by Rogers.

“I was just trying to get a feel for the adrenaline again,” Turnbull said. “And trying to throw strikes. I didn’t want to walk anybody. That was my No. 1 goal. That and to mix in all my pitches. I threw at least one of all my pitches.”

... Second baseman prospect Dawel Lugo had a rough day on the bases. With one out in the second inning, he was doubled up after going first to third on a routine flyout to right center. Then in the fourth, he got an infield single, but when the ball was overthrown, he rounded the bag and started toward second.

The catcher backed up the play and threw him out at first.

"Just some sloppiness there by Lugo," Gardenhire said.

... The Tigers will open the Grapefruit League season Saturday against the Blue Jays in Dunedin. Left hander Matt Moore will start. Neither Miguel Cabrera nor Nick Castellanos are scheduled to play. They will make their spring debuts at Publix Field Sunday against the Phillies.