The Tigers are liking what they're seeing from new second baseman Josh Harrison and shortstop Jordy Mercer.

Lakeland, Fla. — Think about this. Last season, the Tigers started the season with Jose Iglesias at shortstop and Dixon Machado at second. They ended the year with prospect Dawel Lugo at second and a combination of Pete Kozma, Ronny Rodriguez, Harold Castro and Niko Goodrum at short.

And it wasn’t like Trammell and Whitaker were playing there the other months.

So, how much more stable are things this year with the tried-and-true combination of Jordy Mercer at short and Josh Harrison at second?

“We’re just going to sneak up on a lot of people,” Mercer said after the Tigers completed their spring sweep of Fort Myers on Tuesday with a 4-3 win over the Red Sox. “I don’t think a lot of people are giving us a chance, which is good.

“There’s a lot of hungry guys in here and it seems like we’re feeding off each other.”

Nobody is saying Mercer and Harrison are the second coming of Trammell and Whitaker, that would be disrespectful. But, for a developing team, the consistency and professionalism they provide will be conspicuous, to say the least.

“You’ve got to be strong up the middle, that’s the basis for a good baseball team,” manager Ron Gardenhire said.

“And I think we have some strong people up the middle here.”

“I’m just trying to get ready for opening day,” Mercer said. “That’s the biggest thing I’ve learned over the years. You just try to take baby steps forward each and every day with your at-bats and your approach.”

Mercer jumped a David Price fastball on Tuesday and lined it over the fake Monster in left field at Fenway South. It was his second homer of the spring.

“Honestly, I was more happy with my last at-bat,” he said, of a fly out to right field. “I hit that ball good, I stayed on it and I didn’t roll over. I got a little bit under it, but the path was real good.”

Where the comfort level comes in for Gardenhire is in the field. Mercer is already fluent with the Tigers defensive system and their shifting philosophy. And he contributes to that with his high baseball IQ and his instincts.

He is like Alan Trammell in that he never looks flashy, probably rarely makes the highlight reels, he just seems to always make the play.

“He’s solid,” Gardenhire said. “He knows what he’s doing. He knows where he’s at on the field. He knows how long he has to hold the ball before he throws it. 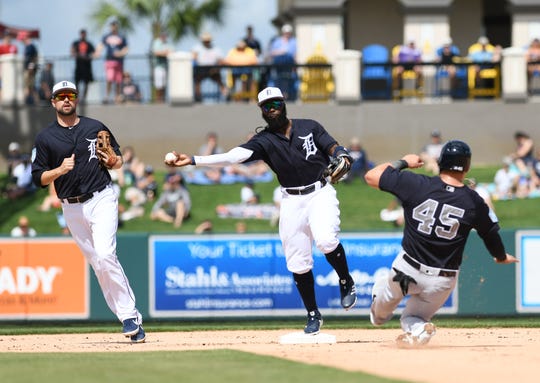 As is Harrison, who plays with a mixture of flair and grit. When healthy, he will hit between .272 and .315 with an on-base average over .330. But that’s just the raw production. It’s harder to quantify the value of his intangibles.

“Josh is going to be huge for us,” Mercer said. “I call him the little spark plug. Like today (Tuesday) he got on base three times and really set the tone for us. There’s a lot of little things like that that a lot of people don’t see.

Harrison, who wasn’t signed until Feb. 23, has seven hits and five walks from the leadoff spot — a lusty .522 on-base average.

“He’s not afraid to go deep in counts,” Gardenhire said. “He told me he doesn’t like to swing at the first pitch, but he likes to ambush a pitcher every once in a while to keep him honest. He’s done this (hit leadoff), there is no panic when he gets to two strikes.

“That’s why I say, for us, he’s a prototypical leadoff hitter.”

Harrison also has lightning-quick hands at second base. There was a play against the Yankees Sunday. D.J. LaMahieu hit a two-hopper that backed up Jeimer Candelario at third. The odds of turning two were slim, but Candelario’s throw barely hit Harrison’s glove before he was already completing his turn at second.

“Really quick, and he’s always been that way,” Gardenhire said. “This guy can really play. His energy, his knowledge of the game are well above average. When he speaks on the bench, people listen. He really brings a lot.”

The biggest worry for Gardenhire now is, who is going to play up the middle when Mercer and Harrison don’t. Harrison has battled a hand injury the last two seasons and Mercer dealt with a left leg injury. Even if they stay healthy, you figure they will play 130-140 games maximum.

“That’s why right now we are looking for people who will fill in when they need days off,” Gardenhire said. “Who’s going to be that guy? Niko (Goodrum) is the extra guy, but we want to play him all over the place. We need more depth.”

The Tigers signed Kozma back to be the primary insurance policy against a long-term injury to Mercer. Gardenhire would be completely comfortable playing him every day, even if his offensive production are some 50 points less that Mercer’s.

Gordon Beckham is making a case to earn a spot on the Tigers' roster. (Photo: Robin Buckson, Detroit News)

The Tigers are going to carry a second utility player, and if Gardenhire has his way, it will be a middle infielder — not a first base-corner outfield player. Presently in camp, the three candidates would be Ronny Rodriguez, Harold Castro and veteran Gordon Beckham.

All three have played well this spring, but Beckham, the former White Sox second baseman who spent the last two years mostly in Triple-A, has been a revelation.

“He knows how to play,” Gardenhire said of Beckham. “He’s got all the answers, all the right answers. He studies the game, he understands the game. He’s one of the guys I am definitely taking a good look at.

“I love his make-up. I love the whole package.”

Mercer is correct, though, there aren’t many pundits out there claiming the Tigers are going to shock the world this season. But who listens to pundits?

“Somebody said we lost like 40-some games by one run last year?” Mercer said.

“So that’s just a few things here or there that could turn the whole thing around,” he said. “Having a healthy Miggy (Cabrera) for a full season is going to help. We’ve got some key pieces here and some good players.

“And I have seen more than a few pitchers out here throwing the crap out of the ball. So, I think it’s going to be fun, I really do. I am excited.”