Rule changes for 2019 include one trade deadline (July 31), an All-Star Election day and a $1 million prize for the home run derby winner

Lakeland, Fla. – The players sat on the grass in the outfield on Kaline Field, the back field that’s directly behind the center field wall at Publix Field, well outside the Tigers administrative building that houses the front office at TigerTown.

Was the separation symbolic of anything?

“There was front office (personnel) in the kitchen when we tried to have our meeting," Nick Castellanos said. "So we went out to Kaline (Field).” 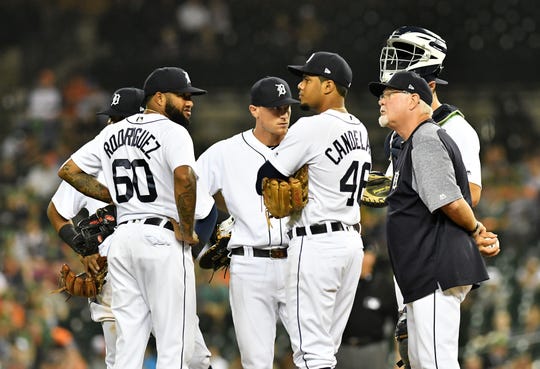 The maximum number of mound visits will be reduced from six to five. (Photo: Robin Buckson, Detroit News)

It was, to say the least, an attentive group of Tigers players that locked into what Tony Clark, the executive director of the players association, was telling them in his annual spring training visit Thursday.

“Our guys are unified in ways we haven’t seen in some time.”

As Clark was addressing a group of reporters, Major League Baseball and the players association made official a batch of rule changes that will take place over the next two seasons, pending ratification by the 30 teams.

This season, there will be just one trade deadline (July 31), there will an All-Star Election Day and the winner of the Home Run Derby will win $1 million. Next season, relievers will have to face at least three batters per outing and rosters will expand from 25 to 26 (with a maximum of 28 in September).

But the union’s acceptance of those rules, and some other cosmetic changes, came with the assurance from Major League Baseball that the two sides will sit down and discuss some of the economic and competitive issues – with the hope of renegotiating and extending the current collective bargaining agreement before it expires in December 2021.

The league also agreed not to institute a pitch clock for the duration of the CBA.

Getting that commitment from the league was tantamount to the union accepting the rule changes. Players have become increasingly vexed by the free-agent system, with teams rarely offering multi-year deals to players over 30 years of age, with so many quality veteran free agents waiting well into camp and into the season without getting a deal, with too many teams in rebuild mode and too few teams, in the players’ view, actively trying to compete.

"The fact is, there are still good players out there who are free agents and they can help a team win."

"That's a Cy Young Award winning and arguably a guy who could be the best closer in history," Boyd said. "It says something that they are still free agents."

Boyd recalled the excitement he felt as a kid growing up in the Seattle area, when the Mariners signed free agents Richie Sexton and Adrian Beltre one year.

"It didn't always turn out, but you always had that excitement as a fan that your team was trying to win," he said. "Fans want to see the best team. Fans want to see competitive teams. They pay their money to show up to watch two teams that are good, that have the best players in the game.

"More than anything, this dialogue is a step in the right direction."

Clark said he believed the league has some of the same concerns about competitiveness.

“We would like to believe that both sides recognize that the current state of affairs is not sustainable,” Clark said. “Therefore, an opportunity to talk about the broader economic pieces gives us a chance to affect the kind of change our industry needs prior to 2021.”

What the union is trying to do, alter the economic language of a collective bargaining agreement before the end of its term, is unprecedented.

“I don’t think it’s anything new to suggest that we have some concerns about where the industry is at,” Clark said. “The idea that they are willing to have a conversation on the broader interests suggests they may also have an interest or some concerns, as well.

“We will see how things manifest themselves through these conversations.”

Among the topics of these conversations, which Clark said he expects to commence sometime after the season opens, will almost certainly be how to incentivize owners and teams to stay competitive and not go the tear-down-rebuild route the Tigers and many other teams have gone.

“We think that competition and having the best players on the field – young, middle and veteran players – is in the best interest of everybody,” Clark said. “That is at the foundation of our concerns.”

Here’s a rundown of the rule changes agreed to by the league and union:

► Inning breaks: Subject to discussions with broadcast partners, inning breaks will be reduced from 2:05 to 2:00 in local games, and from 2:25 to 2:00 in national games.

► Mound visits: The maximum number of mound visits per team will be reduced from six to five.

► Trade deadline: The trade deadline will remain July 31; however, trade waivers will be eliminated.  Players may be placed and claimed on outright waivers after July 31, but players may not be traded after that date.

► All-Star Game fan voting will be conducted in two rounds.  During the “Primary Round,” each club will nominate one player per eligible position (three outfielders), who will be voted on by fans.  In late June or early July, an “Election Day” will be held in which the top three vote-getters at each position in each league during the Primary Round (including the top nine outfielders) will be voted on by fans during a prescribed time period to determine the All-Star Game starters. Further details on the new fan voting format will be announced in April.

► If the game goes beyond nine innings, both clubs will start the 10th inning and each subsequent inning with a runner on second base. 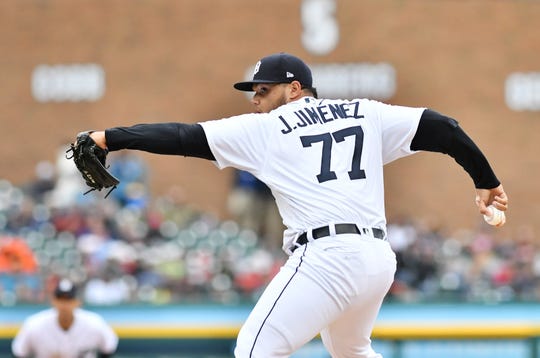 Starting in 2020, pitchers must pitch to either a minimum of three batters or the end of a half-inning. (Photo: Robin Buckson, Detroit News)

► Elimination of 40-man active roster limit in September. From Sept. 1 through the end of the postseason season, all clubs must carry 28 players on the active roster.

•  Following the ninth inning of an extra-inning game; or

•  In any game in which his team is losing or winning by more than six runs when the player enters as a pitcher.

► Minimum number of batters for pitchers: The Office of the Commissioner will implement an amended Official Baseball Rule 5.10(g) requiring that starting pitchers and relief pitchers must pitch to either a minimum of three batters or the end of a half-inning (with exceptions for incapacitating injury or illness). The Players Association has agreed that it will not grieve or otherwise challenge the Office of the Commissioner’s implementation of the amended Rule 5.10(g).