Nick Castellanos hit his first home run of the spring -- a scud into the Tigers bullpen in right field. 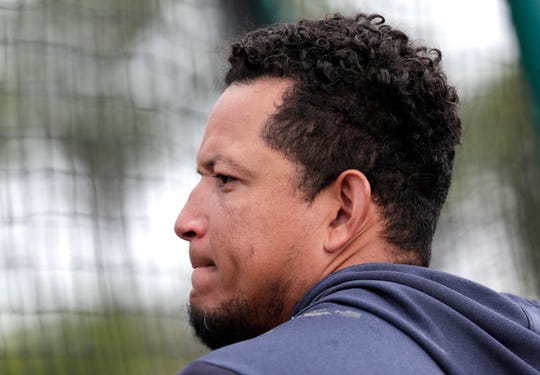 Lakeland, Fla. – There were very few redeeming qualities in the Tigers' split-squad 14-1 spring training loss to the Orioles here Monday.

The fielders made four errors. The pitchers gave up 18 hits. The hitters collected three hits.

"That wasn't pretty," said Toledo Mud Hens skipper Doug Mientkiewicz, who managed this game while Ron Gardenhire had the squad that lost 3-2 to the Blue Jays in Dunedin. "I hate to make excuses for them, but as a player, you do get to where you are smelling the end of (spring training) and you want to get through it.

"By the same token, you never want to look like that at any given time."

It was a rough game for home plate umpire Brennan Miller, too. He normally works Triple-A games in the International League.

"I've had Brennan every year," Mientkiewicz said. "And I told him, 'You're going to make me go out there in a spring training game, aren't you?'"

Tigers starting pitcher Jordan Zimmermann had some issues with Miller's strike zone in the fifth inning. Then, in the bottom of the sixth, Miller called out both Nick Castellanos and Miguel Cabrera on pitches that seemed well out of the strike zone.

Castellanos protested briefly. Cabrera protested animatedly, drawing a line with his bat to indicate how far outside the pitch was. Miller emphatically ejected him.

"You are trying to lean toward your own player there, especially when he's won a Triple Crown," Mientkiewicz said. "At the same time, it's spring training for everybody. But it shows they care when they get that upset in March.

"These at-bats mean something to those guys. They are trying to get ready, too. As a manager, I like to see that. These at-bats matter, even to a guy who's won a Triple Crown."

Cabrera, who was coming out after that anyway, had a single and two strikeouts in the game. He also made two errors at first base.

Castellanos provided the only offensive highlight of the game for the Tigers. He sent a 94-mph fastball from Orioles starter Andrew Cashner into the Tigers’ bullpen in right field.

The transformation of Zimmermann from power pitcher to complete pitcher seems to be complete. He mixed and matched his full four-pitch arsenal again, throwing 79 pitches in 4.1 innings.

"He was rolling for a few innings there," Mientkiewicz said. "He was keeping the ball down and his arm speed is back. From the one or two times I saw him last year, he looks completely different.

"It looks like he's got deception back in his delivery."

It ended on a sour note, a five-run fifth inning, but those runs will be erased off his ledger when the team breaks camp next week. What stays, though, is how Zimmermann – likely the Opening Day starter in Toronto – is attacking hitters. He’s no longer just a fastball-slider guy.

"The first three or four innings were really good," he said. "I felt like I was able to spot everything. In the fifth inning I got a little tired and started leaking a little bit, and I didn't have the command I had in the first few innings."

He started the game by striking out Jonathan Villar on three called strikes, two swing-back fastballs and a slider. Villar went back to the dugout explaining how much Zimmermann’s ball was moving.

"I didn't know what to throw him anymore," Zimmermann joked. "But I was mixing it up. I got into 3-2 counts on a lot of guys and rarely threw a heater. At 3-2, I even threw a couple of curve balls.

"The big thing was, I was able to throw strikes with those pitches. Or at least in those situations, you have to throw something that looks like a strike almost the whole way, if it's going to be a ball."

Zimmermann had allowed just a walk and a hit batsman through four innings. At that point this spring, he’d pitched 13 innings, allowed two runs with 17 strikeouts.

"It's tough because you don't really know any of these guys," Zimmermann said. "I think their three-hole hitter had a double ear flap on his helmet (Ryan Mountcastle). I don't know if he was super prospect or what. You just don't know.

"I haven't faced half of these guys so you don't really know where their weak spots are. It's difficult, but I still need to make better pitches."

With his father broadcasting the game back to Detroit, Tigers outfield prospect Cam Gibson started in left field and got to play the full nine innings. He went 0-for-3 and made a diving catch in the eighth inning.

"I just felt, his dad was watching and he doesn't get a chance to see his son play too often," Mientkiewicz said. "And he does play all nine over there (on the minor-league side). I asked him before the game if he'd played nine innings yet and he said, 'Oh yeah, every time.'

Cam's dad, if you don't know, is Kirk Gibson.

Tigers closer Shane Greene, for the first time this spring, had to exert himself to get through his inning. An error by Miguel Cabrera (his second of the game), a single and a walk loaded the bases with one out.

But Greene struck out Mountcastle on three sweeping sliders. Then he froze Chance Sisco on a 1-2 sinker on the inside part of the plate. It was a 19-pitch inning for Greene.

... Set-up right-hander Joe Jimenez threw 27 pitches in the seventh inning, and only got two outs. He gave up a two-run home run to Dwight Smith Jr. and left with two runners on and two outs.

... In Dunedin, Daniel Norris started and gave up three runs on six hits and two walks over three innings.

... Left-hander Ryan Carpenter, who is expected to begin the season in the rotation at Toledo, pitched three more scoreless innings. He's not given up a run, and only four hits, in 11 innings of work.

... Gordon Beckham started the game at shortstop and hit a home run.